Shelby Lawson says the ability to travel abroad while continuing her degree was a factor when she chose Arizona State University over other schools also recognized for their international affairs programs.

“I knew this would be the perfect way to do my internship with the State Department while working towards a degree. I am so thankful that I do not have to take time off of school to do an internship that will be beneficial to my future,” said Lawson, a junior. 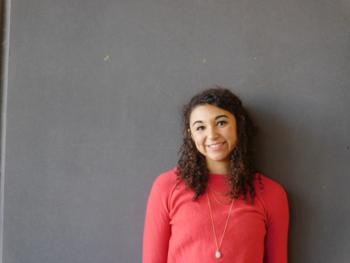 Global studies majors within the School of Politics and Global Studies are required to complete an international experience that may be an internship or study abroad during their time at ASU.

Lawson has recently accepted an internship in the Public Affairs section of the embassy in Lima, Peru. While there, she will be working closely with Peruvian students who plan to one day study in the United States. She will also be assisting in social media, press conferences and cultural events hosted by the embassy.

Lawson, who had interest in international relations when she started at ASU, says that her coursework has expanded her knowledge of the world and introduced her to the varying international career options. She was able to learn about the different sections of an embassy and what life as a foreign officer is like, firsthand, in a political science course taught by former U.S. Ambassador Douglas Hartwick.

“Working with professor Hinojosa sparked my interest in the region and is what led me to apply for the position in Peru,” Lawson said.

While in Peru, Lawson will also be working on her honors thesis on the global problem of sex trafficking, a topic covered in a global politics and human rights course taught by School of Politics and Global Studies professor Roxanne Doty.

“I plan to do research on NGOs (non-governmental organizations) and governmental initiatives working against trafficking while in Peru,” Lawson said.

The next thig that she looks to check off her list is to apply to either the Fulbright Scholar Program, the Pickering Foreign Affairs Fellowship or the Rangel International Affairs Program. With dual citizenship in Germany and the United States, she also is considering a master’s degree in Europe.

“Today there is no doubt in my mind about my choice to come to ASU," she said. "There are so many opportunities on this campus, and so many people willing to help you pursue your dreams.”

Sometimes getting even the most exciting news can be anticlimactic. (Curse you, caller ID!) That was the case for ASU’s Patricia Colleen Murphy, who was at home in her Phoenix kitchen making a pot of soup when a momentary glance at her ringing phone signaled that she’d won this year’s prestigious May Swenson Poetry Award, a competition organized by University Press of Colorado and its impr... Polytechnic campus
ASU poet proves you can be a professional writer, with some hard work.
ASU poet earns prestigious award for her "wonderfully disturbing" poetry.
March 8, 2016

Sometimes getting even the most exciting news can be anticlimactic. (Curse you, caller ID!)

That was the case for ASU’s Patricia Colleen Murphy, who was at home in her Phoenix kitchen making a pot of soup when a momentary glance at her ringing phone signaled that she’d won this year’s prestigious May Swenson Poetry Award, a competition organized by University Press of Colorado and its imprint, Utah State University Press. Recipients of the annual Swenson Award, which honors one of America's most provocative and vital writers, receive a cash prize and a book contract.

“I saw it was a Colorado number and, it was strange, but I immediately knew,” said Murphy (pictured above), a senior lecturer in the College of Letters and Sciences at ASU’s Polytechnic campus and founding editor of the student-produced literary magazine Superstition Review.

This will be Murphy’s first book — though many of her poems have been published in respected literary journals and taken numerous honors. The collection of 60-some poems, titled “Hemming Flames,” will be published and released by Utah State University Press this summer.

“I had the manuscript out at about 10 contests,” she said. “It had finaled at other competitions in recent years, and two separate publishers had each had it for two years before ultimately saying, ‘It’s ready to go, but it’s not for us.’ So I knew the work was getting close.”

Dunn praised the collection (calling it “wonderfully disturbing”) and, highlighting its title, which comes from the book’s final line, he wrote:

“... As good titles do, it provides a way of understanding what have been the book's necessities. The last two lines are, ‘Yesterday I invented fire. / Today I'm hemming flames.’ The ‘today’ speaks to almost every poem Murphy artfully offers us, as if the act of writing itself is an attempt to hem what can't easily be hemmed.”

That poem, Murphy said, voiced how she felt after both of her parents died within five months of each other.

The work on the whole is gut-wrenching and can be difficult to read, she admits, because it honestly addresses painful issues in her life, including the impact of a parent’s mental illness.

The collection of poems — a few of which she has been reworking for 20 years — turned a corner several years ago after she decided, with a push from her writers’ group, that she needed to be brave enough to deeply address the emotional material.

“When we write halfway, we get stuck in a place where our work is less impactful,” she said. “I took risks in this book that I didn’t take before.”

As a mentor, she tries to instill in her writing students and Superstition Review editors the understanding that pursuing a writing life is like a marathon, with identifiable steps in training and building endurance.

“My professional journey as a poet and author is part of what I want to teach my students. This is what being a professional author looks like,” said Murphy, who earned her MFA in 1996 from ASU’s creative writing program in the Department of English in the College of Liberal Arts and Sciences.

She makes the professional writers’ experience accessible and transparent to them from every possible angle.

Last summer, Murphy wrote in real-time on her social-media networks about her 25-day residency at the Ragdale artists' community, which offers writers, visual artists, composers, architects and other creatives a serene place to spend focused time on work.

“A lot of students don’t know what an artist colony is. It was thrilling to be able to share my experiences at the residency with them, and it was even more thrilling when five months later I had a book contract because of some of the work I did while there,” Murphy said. “It’s important for me to share information about how to get published, like ‘You can’t do it without other people giving you feedback,’ and, ‘There are institutions out there that will support you.’ ” 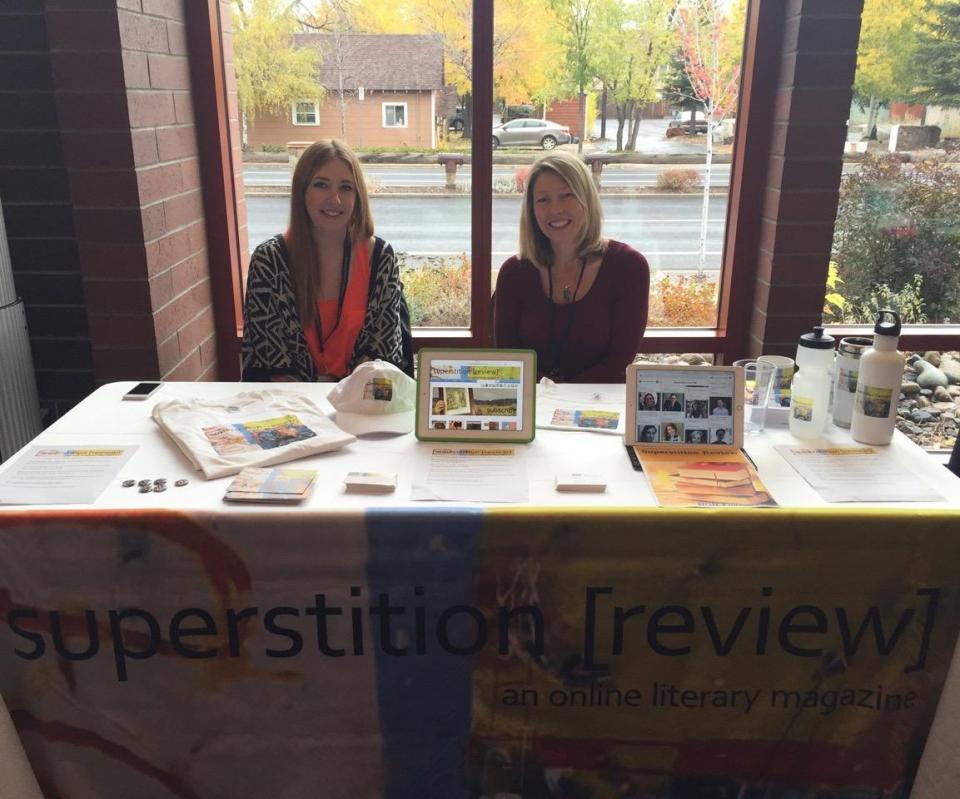 Patricia Colleen Murphy (right) and Superstition Review intern Leah Newsom, tabling at the NonfictioNOW conference in Flagstaff in October. Attending professional conferences is one of the many opportunities Murphy affords student editors. Newsom, who served as a nonfiction editor and then interview editor, has been accepted to the ASU MFA program in fiction for the fall. Courtesy photos.

For ASU’s recent Night of the Open Door festivities at the Polytechnic campus, she and Superstition Review editors organized a panel of professional writers to talk about their career paths. She also takes students each year to the AWP (Association of Writers and Writing Programs) Conference and Bookfair.

Since launching Superstition Review in 2008, she has given more than 275 ASU student interns not only tangible, resume-worthy experience in publishing (see the video segment at 6:00) but also countless opportunities to “peek behind the curtain,” interviewing “big-name” and emerging writers and artists about their work and lives.

Murphy said the response from her students about her winning the Swenson Award has been very meaningful: “They’re about as excited for me as I am for me!”

Her professional colleagues are similarly elated.

“Trish has made a life committed to poetry, and to sharing it with the world at large,” noted fellow poet and ASU alumnus Robert Krut in an email message for this story. Krut, who is also part of Murphy’s virtual writers’ group, teaches writing at the University of California, Santa Barbara.

“Trish is a great poet, a great supporter of the literary community, and a warm, encouraging person,” Krut said. “Needless to say, there are a lot of us out there thrilled about her award and book release.”

Here is Murphy's poem that inspired the book's title:

First I look at some Eliot, which puts me

straight to sleep for a lovely hour or so.

Since it’s hard, I decide to write one of those

poems that gets by on a few clever ploys.

as not a dream. I’m stealing a Danish and eating it

in a parking lot while dodging cars driven

by nonagenarians who remind me of my parents.

Sh**. Everything reminds me of them.

and all I can think of is Mom and Dad in urns.

Then I see a man with his small son.

I see a tender look between them. That hurts

like hell. But I don’t even need that image.

Doctor put me on the stare-pills.

I can’t feel my distal parts.