“Evolution can explain not only things in the body that work well, but also things that leave it vulnerable for disease,” said Randolph Nesse, MD, director of ASU’s Center for Evolution & Medicine. Nesse gave a general overview of evolutionary medicine and has been a principle advocate of incorporating evolutionary biology into the medical school curriculum. He introduced a new website (EvMedEd.org) developed at ASU with comprehensive access to educational resources for the field. 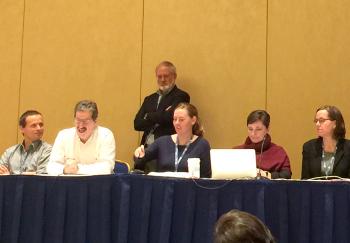 “What unites all of these talks is asking why?” said Beall. “Each speaker is asking why human biology is this way.”

For ASU’s Katie Hinde, the AAAS event was a premiere opportunity to highlight her work on teasing out the benefits of a mother’s milk.

“The first 1,000 days are critical to promote lifelong health,” said Hinde, who was recruited recently from Harvard to join Nesse’s center.

“Mother’s milk is described as liquid gold. However, despite its importance, the research into decoding the benefit of breast milk is lacking. Dairy scientists know more about milk from cows than we know about mother’s milk.”

Hinde leads the Comparative Lactation Lab at ASU. She hopes to link her findings to confront global challenges such as childhood obesity, and infant deaths due to diarrheal diseases. To improve the delivery of the food, medicine, and signal of milk provided to premature babies, “we need to work backwards from what we know are critical components in milk, to helping babies thrive in the neonatal intensive care unit,” said Hinde. “Treating all milk the same is not evidence-based medicine.”

The panelists demonstrated how medicine, when viewed through the lens of evolutionary biology, gave entirely new insights and fresh approaches to critical conditions such as cancer, sepsis, obesity, infant health, and the delicate balance between health and disease from our co-existence and co-evolution with millions of bacteria harbored inside the human body.

In response to a question, Nesse said, “Many people have the misconception that evolutionary medicine implies the body is perfect, but it actually implies the opposite. Every speaker today highlighted the trade-offs involved in every trait, and how everything is inherently imperfect,” said Nesse.

To learn more about ASU’s efforts in evolutionary medicine, go to: evmed.asu.edu.

Nesse is also a professor in ASU's School of Life Sciences. Hinde is an associate professor in the School of Human Evolution and Social Change. Both schools are part of the College of Liberal Arts and Sciences.

From effective team science to drones on the range, Arizona State University faculty and students played a big role in the annual meeting of the American Association for the Advancement of Science (AAAS). AAAS is the world’s largest science and technology society, and its annual meeting draws thousands of scientists, engineers, educators, policymakers and journalists from around the world.This y...

From effective team science to drones on the range, Arizona State University faculty and students played a big role in the annual meeting of the American Association for the Advancement of Science (AAAS). AAAS is the world’s largest science and technology society, and its annual meeting draws thousands of scientists, engineers, educators, policymakers and journalists from around the world.

This year’s meeting was held in Washington, D.C., on Feb. 11–15. The theme was Global Science Engagement, and the topics discussed by ASU professors included a look at Germany’s efforts to transition its energy industry to renewables, the use of drones in monitoring natural resources, effective team science and the role of evidence-based science policy. In addition to formal presentations, ASU students made several poster presentations of their research, and there was a colloquium on the evolutionary medicine program at ASU. 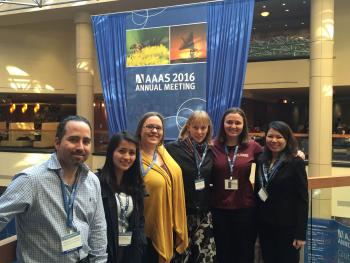 Arizona State University was well represented at the 2016 annual meeting of the American Association for the Advancement of Science. Enrique Vivoni (left) presented at the conference. He is joined by ASU students Ruby Upreti, Rhian Stotts, Charlotte Till, Danielle Chipman and Thuy Nguyen. Several of these students had poster presentations at the conference. Download Full Image

Drones on the range

Earth and environmental scientists have often had to rely on piloted aircraft and satellites to collect remote sensing data, platforms that have traditionally been controlled by large research organizations or regulatory agencies. Thanks to the increased affordability and dramatic technological advances of drones, however, scientists can now conduct their own long-term high-resolution experiments at a fraction of the cost of using aircraft or satellites.

Drones “are poised to revolutionize remote sensing in the earth and environmental sciences,” said Enrique Vivoni, hydrologist and professor at Arizona State University’s School of Earth and Space Exploration and Ira A. Fulton Schools of Engineering. “They let individual scientists obtain low-cost repeat imagery at high resolution and tailored to a research team’s specific interest area.”

Vivoni’s own research has focused on rangeland locations in the Sonoran and Chihuahuan deserts, which cover large expanses of northern Mexico and the Southwest U.S. Using drones in these areas has allowed for improved studies on land-atmosphere exchanges and vegetation-runoff interactions.

“The biggest challenge for earth and environmental scientists has been obtaining high-resolution [data for] characterizations and predictions,” said Vivoni. “We believe unmanned aerial vehicles can fundamentally change how ecological and hydrological science is conducted and offer ways to merge remote sensing, environmental sensor networks and numerical models.”

Finding solutions to technological and social challenges has become more complex, and making significant progress often demands collaboration by sizable teams of experts with diverse and highly specialized kinds of knowledge. Such “team science” has led to important advances that could never have been accomplished by lone researchers.

“But sometimes it doesn’t work all that well,” ASU professor and psychologist Nancy Cooke told AAAS.

The problem is recognized by the National Science Foundation, which asked the National Academies of Science, Engineering and Medicine to assemble a group of experts to seek ways to ensure and improve the effectiveness of research teams. The 13-member Committee on the Science of Team Science was led by Cooke. Her committee’s report, “Enhancing the Effectiveness of Team Science,” was the third-most-downloaded article published last year by the National Academies Press.

Recruiting people with the most impressive records of accomplishment and using the best research facilities is no guarantee for a successful team project, said Cooke, who is a professor of human systems engineering in the Ira A. Fulton Schools of Engineering.

“You must attend to the development of teamwork, communication and team leadership,” she explained. Those skills are especially important when team members are geographically dispersed, come from different cultures and work in different disciplines that don’t always speak the same technical parlance.

For team chemistry to develop, “you need a sort of dating period,” she said, during which team members focus on how to initiate and manage their interactions, share knowledge, maintain communications and make certain that “everyone is on the same page” throughout the course of the project.

In their National Academies committee report, Cooke and her colleagues say public agencies and private organizations funding research should consider more than the capabilities of the engineers and scientists involved. Funders should give equal attention to researchers’ strategies for collaboration throughout the entire time period that grants are supporting the projects.

When politics and science mix

ASU professor Dan Sarewitz spoke at the AAAS conference on the complicated intermingling of science and politics. Looking at a very public disagreement between President Barack Obama’s senior science adviser, John Holdren, and University of Colorado political scientist Roger Pielke Jr., Sarewitz asked, “When experts disagree about contentious issues like climate change, is it possible to separate the science from the politics?”

At Senate hearings and other public forums, Holdren and Pielke advanced different views about the links between drought and climate change, a disagreement that was then amplified by other political players. With Holdren charging that Pielke was out of the scientific mainstream, and Pielke arguing that Holdren was using the cover of his political position to make attacks that were inaccurate and personal, the underlying scientific issues were concealed by the fog of debate.

Sarewitz drew on this particular episode because it offers a lens to see how politics and science become intermixed.

“Above all,” Sarewitz said, “I want to highlight that the idea of ‘evidence-based policy’ is itself inherently political, since everyone wants the science on their side. But to understand what’s going on in these sorts of disputes you have to look carefully at the positions of the experts and ask: ‘What policies are they supporting with the evidence that they choose?’ "

Sarewitz is a professor in ASU's School of Life Sciences and School of Sustainability and is co-director of the Consortium of Science, Policy and Outcomes.

Germany’s energy system has experienced fundamental changes in the past 25 years. Its renewable-energy share has increased exponentially over the past two decades, now accounting for almost a third of Germany’s gross electricity consumption. This is the direct result of a broad range of innovation policies, tools and arrangements generally known as the “Energiewende” (the energy turnaround), with the ultimate aim to reduce greenhouse gas (GHG) emissions existing in 1990 by 80 to 95 percent by 2050 (i.e. an absolute emission in 2050 from 62.5 million to 250 million tons CO2 equivalent).

However, the efforts to steer German’s transition towards low-carbon technologies and to design a better, more sustainable German society put an unprecedented strain on Germany’s utility industry. Inside the Energiewende, there is no other economic branch harder hit by the successive waves of induced changes than the utility sector. From its past position as the backbone of the entire German economy, the utility sector now teeters on the brink of dissolution, trying hard to redefine itself as a provider of smart services.

Even with all of the dramatic changes, Germany is likely to miss its goals of reducing GHGs set for 2050 by at least 100 percent (i.e. by 250 million tons CO2 equivalent of difference), if the carbonization rate that has been in place for the past 25 years continues unabated, said Christine Sturm, an ASU student who presented at AAAS.

“The lesson to be learned is that even if a public policy exactly mirrors the values of those who called for it, this does not necessarily mean that the policy is a successful one.”