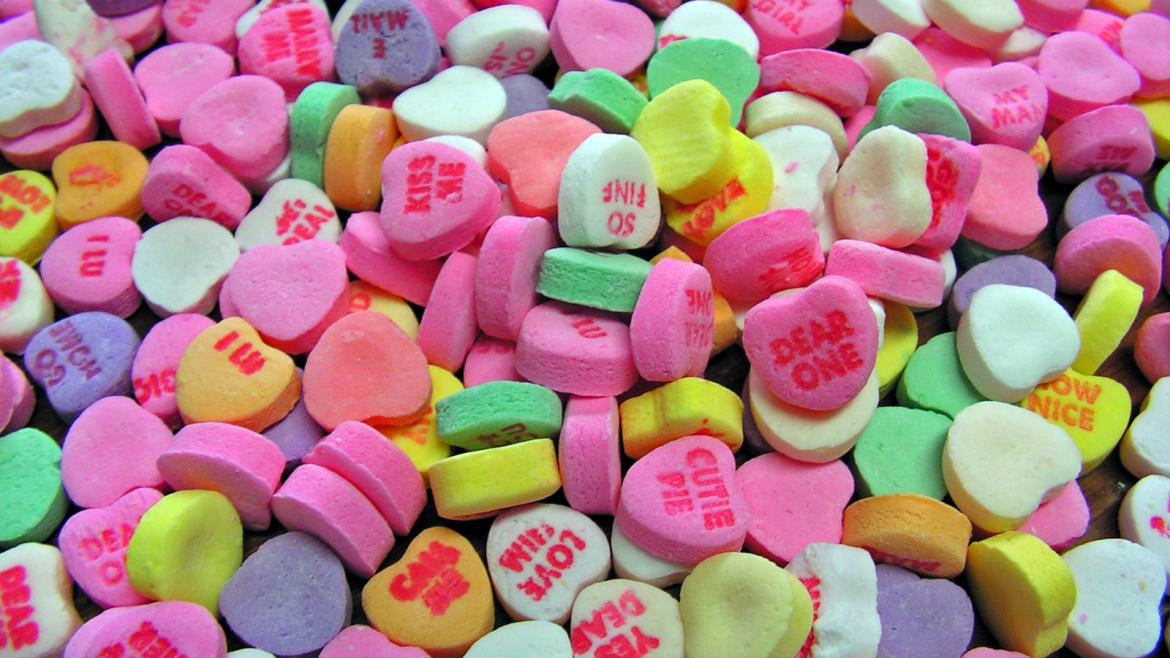 There's got to be more than 'love'

Tempe campus
Searching for words this Valentine's Day? Good luck; our language is limited.
More than "love": When our English language fails our feelings.
February 11, 2016

ASU professor explains why our language has only one word for romantic affection, and how to ensure you can relate your feelings

Declarations of love will be everywhere this Valentine’s Day weekend, from sappy cards to bombastic displays of affection. But if you’re finding it difficult to express your romantic feelings, don’t despair — just blame the English language.

Whether it’s entrenched stoicism or a plain ol’ lack of creativity, our culture has a rather limited vocabulary to describe the most discussed aspect of our emotional spectrum.

In contrast, Sanskrit has nearly 100 words to characterize love. The ancient Persians had 80. Heck, the Eskimos have 50 words just for snow.

And we’re left with that one four-letter term to describe our heart’s reactions. L-O-V-E.

Making matters worse, “love” has become a catch-all term to describe romantic feelings, familial bonds, platonic attraction and just being infatuated with something. It’s enough to make you wonder how all these Valentine’s Day messages are so successful.

“People do often have trouble being specific about their positive emotions. We can talk about love and pride; other languages have different words for these emotions, and they’re often about our relationships with others,” said Michelle Shiota, an associate professor of social psychology in Arizona State University's Department of PsychologyThe Department of Psychology is an academic unit of the College of Liberal Arts and Sciences. and director of the SPLAT LabSPLAT stands for Shiota Psychophysiology Lab for Affective Testing. The lab is innovative because it explores the effects of positive emotions on our ancestors and how they continue to affect us in our day-to-day lives, physiological responses and relationships..

Shiota, who researches the complexities of cognition and emotion in relation to our personal relationships, explained that, historically, negative emotions like disgust, fear and anger are more recognizable, more identifiable with a term, because researchers have linked them to basic survival instincts. She said we are able to use terms to differentiate between these emotions because of the extensive research conducted to define them.

Also, the specificity of how we describe love varies throughout cultures, depending on whether they are more individualistic, like in the United States, or more collectivistic, like in Asia.

For instance, the Norwegian word “Forelsket,” which describes the euphoria felt while first falling in love.

It’s not just our language holding us back. Our cultural habits might also be preventing us from fully feeling — or at least expressing — our emotions and letting love in.

According to Shiota, a competitive nature and need for independence is part of the American mind-set, different from collectivist groups that are more open to intimacy and dependence.

“We have emotions that help structure society, and cultures have different ground rules,” she said. “In the U.S. we have different cultures that change how emotional traditions vary. It can become complicated to figure out how people emote things in general.”

In order to better understand our loved ones, we should follow the cues our emotions provide, Shiota said. Trusting positive and negative emotions as well as instinct allows us to make the judgments that help us form relationships.

“Our emotions can give us a lot of cues about who is going to be a long-term parenting partner, versus a long- or short-term partner. Our emotions can help us identify alliances and friends,” Shiota said. “People form judgments based on their subtle actions, and our emotions help us make those judgment calls.”

So even if you’re having difficulties composing a flowery love letter for your valentine, you can show him or her the depth of your feeling through body language or emotional display.

“Physiological changes are associated with emotions, facial expressions, posture, the way we touch people,” Shiota said. “People can tell based on touch, and voice is effective too.”

It’s better than relying on that one word to do it all.

5 things we ❤ about robots

Robots are here to stay, in more and more ways every day. Engineers and scientists say it’s likely they’ll eventually be working with us, and for us, in most of our endeavors.So in this Valentine’s Day season, some of the faculty in Arizona State University's Ira A. Fulton Schools of Engineering thought it was time to express a little love for what robots are contributing to our lives.5. Ro...

5 things we ❤ about robots

Robots are here to stay, in more and more ways every day. Engineers and scientists say it’s likely they’ll eventually be working with us, and for us, in most of our endeavors.

So in this Valentine’s Day season, some of the faculty in Arizona State University's Ira A. Fulton Schools of Engineering thought it was time to express a little love for what robots are contributing to our lives.

5. Robots can protect us and provide important information by going places too threatening or too difficult for us.

Coordinated swarms of autonomous robots may someday soon be efficiently and affordably performing many beneficial tasks that would be more difficult and less safe for humans to do on their own. 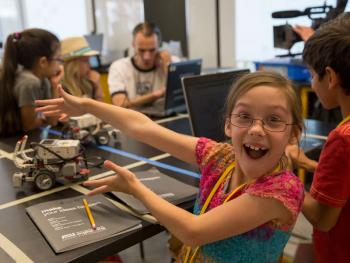 They could play critical roles in disaster response, rescue operations and humanitarian aid missions. They could remove military personnel from danger, and allow us to embark on exploration or defense missions that would be too risky to attempt if we had to send people.

Unmanned maritime, aerial and ground vehicles have already proven to be productive and cost-effective in military operations — including surveillance, reconnaissance, transport, explosive ordnance disposal, mine clearance and security inspections.

In the future we will likely be relying on robot swarms to advance space exploration, more accurately map and monitor our planet, deal with hazardous materials, construct things in remote or threatening environments, deliver cargo and reduce human workloads.

Spring Berman is an assistant professor of mechanical and aerospace engineering in the Ira A. Fulton Schools of Engineering. Her research on the modeling and control of multi-robot systems has drawn support from a U.S. Department of Defense research agency and the National Science Foundation.

4. Robots work with us to increase the effectiveness of our automated manufacturing systems.

These robots make their human counterparts the best they can be. They empower their human coworkers through flexible, easily configurable technology that relieves humans of repetitive and mundane tasks, which ultimately results in a safer and more productive work environment.

Jerry Gintz is a lecturer in the Fulton Schools of Engineering and active in industrial automation and manufacturing control systems technology. In particular, he has extensive industry expertise in programmable automation control systems, computer numerical control systems and robotic systems integration.

3. Robots can enhance or help restore our physical abilities.

After an injury, robots can be extremely useful as assistive or rehabilitation devices. Robots can assist patients to perform tasks that they are unable to perform on their own, or they can be used to train an individual in regaining the ability to perform movements, such as gait or grasping objects.

Marco Santello is a professor and director of the School of Biological and Health Systems Engineering in the Fulton Schools of Engineering. He is also director of the Neural Control of Movement Laboratory, which focuses on understanding the control of complex movements.

Robotics are used extensively in rehabilitation. In the absence of a physical therapist or trainer, for example, an individual may use a robotic device in the home environment. These devices can use sensing technology to assess the physical strength, fatigue level, limb function, heart rate, motion data and other information related to an individual, and adapt themselves by using this information to create a custom exercise environment tailored to that individual. For upper-extremity exercise a device could, for instance, apply increasing levels of resistance as the user's arm strength improves throughout long-term rehabilitative exercise.

Ramin Tadayon is a doctoral student researcher at the Center for Cognitive Ubiquitous Computing (CUbiC) in the Fulton Schools of Engineering. His research focuses on the design of gaming interfaces and feedback environments for at-home rehabilitation and training.

2. As we work to give robots physical and cognitive capabilities similar to humans, they help us better understand the abilities of our own brains and bodies.

Robots excel at accurately measuring variables at a very high speed. We can use robotic exoskeletons to measure human motion during walking, running, arm and hand manipulation and other movements. The information can give us significant insights into how our bodies work within a dynamic environment.

In scenarios involving people interacting with each other, we use robots to measure collaborative behaviors. Once we understand the principles of interaction and human collaboration, we implement control strategies for robots, to teach them how to safely interact and collaborate with humans.

As we make robots that are able to interact more closely with us, we must ensure human-robot collaboration is as seamless as possible. Someday it may be difficult to distinguish if an entity collaborating with you in a demanding task — for example, lifting a heavy object — is a robot or a human.

Panagiotis Artemiadis is an assistant professor of mechanical and aerospace engineering in the Fulton Schools of Engineering and director of ASU’s Human-Oriented Robotics and Control Lab.

Robots are great for luring youngsters into basic engineering. They get hooked and want to get involved in robotics. Before long they’re applying fundamental mathematics and geometry concepts and doing rudimentary mechanical design and computer programming.

In robotics competitions like the Arizona FIRST LEGO League, they go beyond the technological aspects and learn research, teamwork and communication skills. More than that, they learn perseverance and how to bounce back from failure. Those are lessons that serve them throughout their lives.