Studying the textures of sound

Lauren Hayes fronted punk and ska bands in her teens, is a wiz at the keyboard and played the role of Deborah Harry in a tribute band from Scotland called Gentleman Prefer Blondie.

But the new assistant professor of sound studies in Arizona State University’s School of Arts, Media and EngineeringThe school is a collaborative initiative between the Herberger Institute for Design and the Arts and the Ira A. Fulton Schools of Engineering. doesn’t want you to go by her resume; she’d rather you look at her pedigree.

Classically trained in piano since the age of 4, Hayes (pictured above) is a composer, performer and improviser with a doctorate from the University of Edinburgh. She has produced a large portfolio of work, research and music, including three albums. Hayes said her father, David, who played in Motown tribute bands in the 1960s and tinkered with electronics, was her greatest influence.

“We always had a piano, but another aspect was the amount of electronics, computers, Lego mechanics and instruments in the house,” Hayes said. “My dad would solder his own guitar effects, and that influence helped me on my own path.”

Hayes was recording at age 8, which was right around the same time she got into experimental music.

“I’d improvise for hours on the piano. I’d think certain things were hilarious and I’d shout them out to my parents, emulating contemporary classical music that I’d heard,” Hayes said. “When you’re young, you’re told that it’s just noise and that’s not how you’re supposed to play it. But that’s a practice I do now because it’s what I teach.”

For many years Hayes has given multisensory workshops for various groups, including those with sensory impairment, learning difficulties and autism. These workshops use vibration and music to explore the links between sound and touch, often resulting in custom-built instruments designed specifically for a user.

“My work is very much based around the physical experience of technology and digital media in relation to sonic art and music, particularly for performers and audiences,” Hayes said. “I want to find more ways where people can be more interactive so there’s no division between the performer and the audience.”

Last year, as a visiting professor at ASU, Hayes was able to accomplish that goal when she participated in an all-day music festival at Phoenix’s Clarendon Hotel featuring artists who performed in the lobby, a rooftop entertainment space and outside on the pool deck. Hayes played live electronics, which could be heard above and below water by people who used the hotel’s pool, thanks to a pair of underwater speakers.

Hayes said she wants her students to push their artistic boundaries, and inspire them through trial and error.

“I’m not trying to impose my musical aesthetics on anyone because I want to find out what are their backgrounds, what are their interests and get them to try things they haven’t done before,” Hayes said. “I want to encourage them to make mistakes and fail, but more important, help them develop their own personalized practice through the tools I’m going to give them in class. ”

It’s almost like Hayes is channeling her Blondie roots, telling the students to find the answers “One Way or Another.” 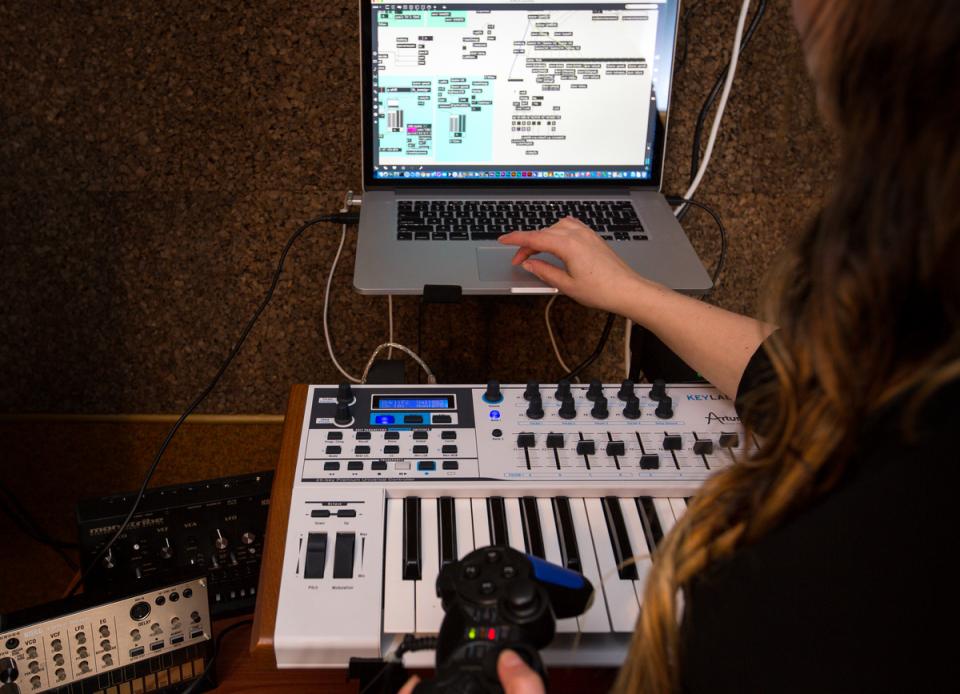 Assistant professor Lauren Hayes demonstrates her electronic musical instrument in the small studio in her office on Jan. 27. She uses a computer program, a MIDI controller and keyboard along with a video game controller to produce sounds. Photos by Charlie Leight/ASU Now

The evening began with a bold assertion:“ISIS’ defeat in Iraq is all but certain, probably within the next 12 months.”Douglas Ollivant, retired U.S. Army officer (pictured above), immediately tempered his statement: “I said that ISIS in Iraq will be defeated. I did not say that ISIS will not still be in Iraq as a terrorist movement.”Issues of domestic and international security are rarel... 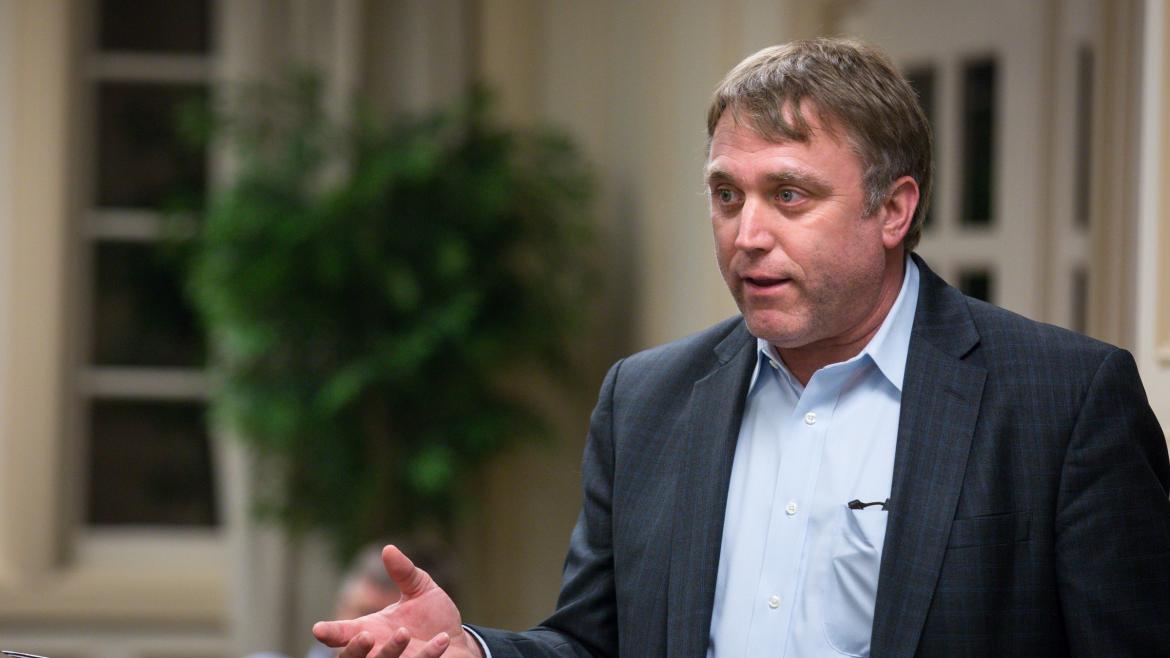 Tempe campus Washington, D.C.
Ollivant: ISIS will be defeated within 12 months, but its terrorism will remain.
ASU Future of War speaker series a forum to explore complex issues.
January 28, 2016

The evening began with a bold assertion:

“ISIS’ defeat in Iraq is all but certain, probably within the next 12 months.”

Douglas Ollivant, retired U.S. Army officer (pictured above), immediately tempered his statement: “I said that ISIS in Iraq will be defeated. I did not say that ISIS will not still be in Iraq as a terrorist movement.”

Issues of domestic and international security are rarely simple, and Ollivant, former director for Iraq at the National Security Council for both the Bush and Obama administrations, didn’t shy away from the complexity during his talk Thursday night on Arizona State University’s Tempe campus.

The discussion started off the second annual Spring Speaker Series, presented by ASU’s Center on the Future of War as part of a continued effort to provide a space where multilayered issues of domestic and international security can be openly discussed in an informal public forum.

The possibility of further global conflict and the United States’ place in it all are questions not always easy to grasp or comfortable to think about, but they are important for all people to consider.

“These are not academic talks, even though some of the speakers are academics,” said Daniel Rothenberg, professor at ASU’s School of Politics and Global StudiesThe School of Politics and Global Studies is a unit of ASU's College of Liberal Arts and Sciences. (SPGS) and co-director of the center. Peter Bergen, fellow SPGS professor, serves as the center’s other co-director.

“The idea is that these are talks that somebody can show up to and find compelling whether or not they’re familiar with a specific academic literature,” Rothenberg said. “So I’m most happy when we get a diverse audience, and when through these talks we generate interest in Arizona State University, in our collaboration between ASU and New America, and in deepening the debate about these pressing questions.”

Pressing questions like that of the defeat of ISIS. Ollivant acknowledged that there would still be a number of issues left to be resolved in the region, but he urged the audience to take into account the progress that has already been made.

“I think it’s very important for us to realize what we have created in Iraq,” he said. “We have bought — through blood and treasure — democratic institutions in Iraq.” 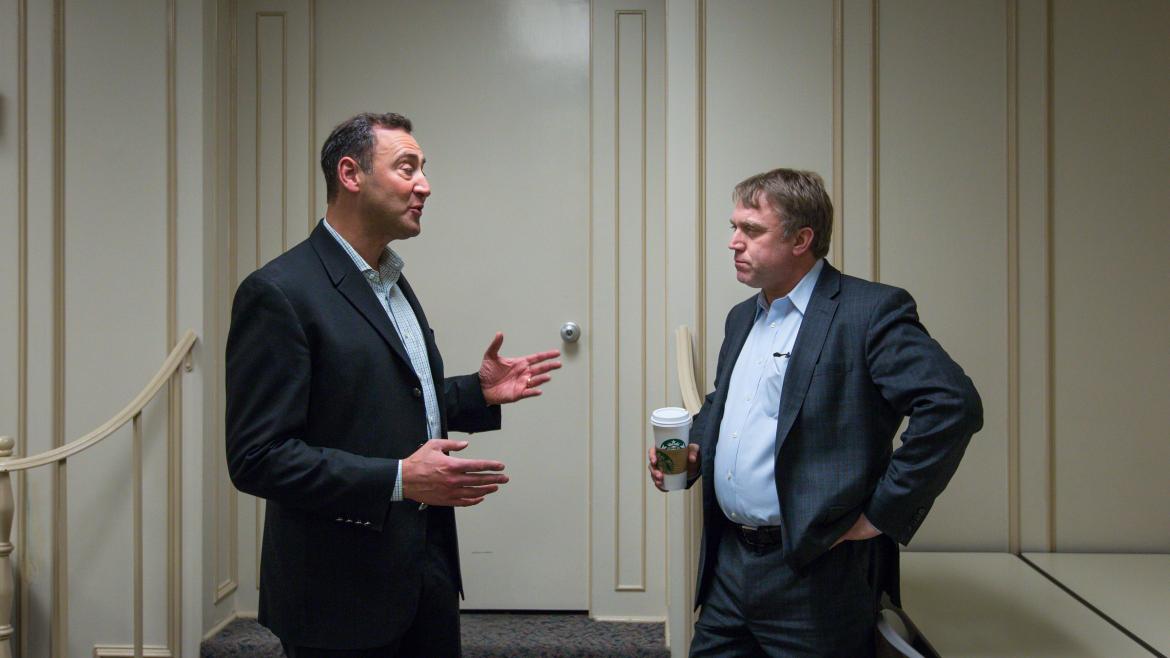 And though Ollivant allowed that those institutions may currently operate at a level that is less than optimal, they have demonstrated several times that they are capable of handling potentially incendiary situations with a peaceful outcome.

“Our return on investment [in Iraq] is rather disappointing, but it’s not zero,” he said. “There are democratic institutions there.”

Ollivant is the latest in Center on the Future of War’s speakers. Founded in 2014, the center links ASU and a group of roughly 95 affiliated faculty from multiple departments in the university with a group of about two dozen national-security experts based out of New America, a Washington, D.C.-based think tank — a sort of pipeline connecting ASU with the Washington world of thought leaders and policymakers.

During his visit to ASU, Ollivant also delivered a guest lecture to Rothenberg and Bergen’s “The Future of War” class, something all speakers are encouraged to do.

That the Washington visitors engage directly with students is important to the center, as is evidenced by the fact that all of this year’s talks are to take place on an ASU campus. As well, three of them are in coordination with ASU’s Walter Cronkite School of Journalism and Mass Communication and will feature prominent journalists, including Thomas E. Ricks, Pulitzer Prize-winning former reporter for the Wall Street Journal and Washington Post.

Next up for the Spring Speaker Series is Rosa Brooks, Georgetown University School of Law professor and former counselor to the under secretary of defense for policy, U.S. Department of Defense. Her talk,  “How War Became Everything,” is at noon Feb. 3 in West Hall 135, on the Tempe campus.