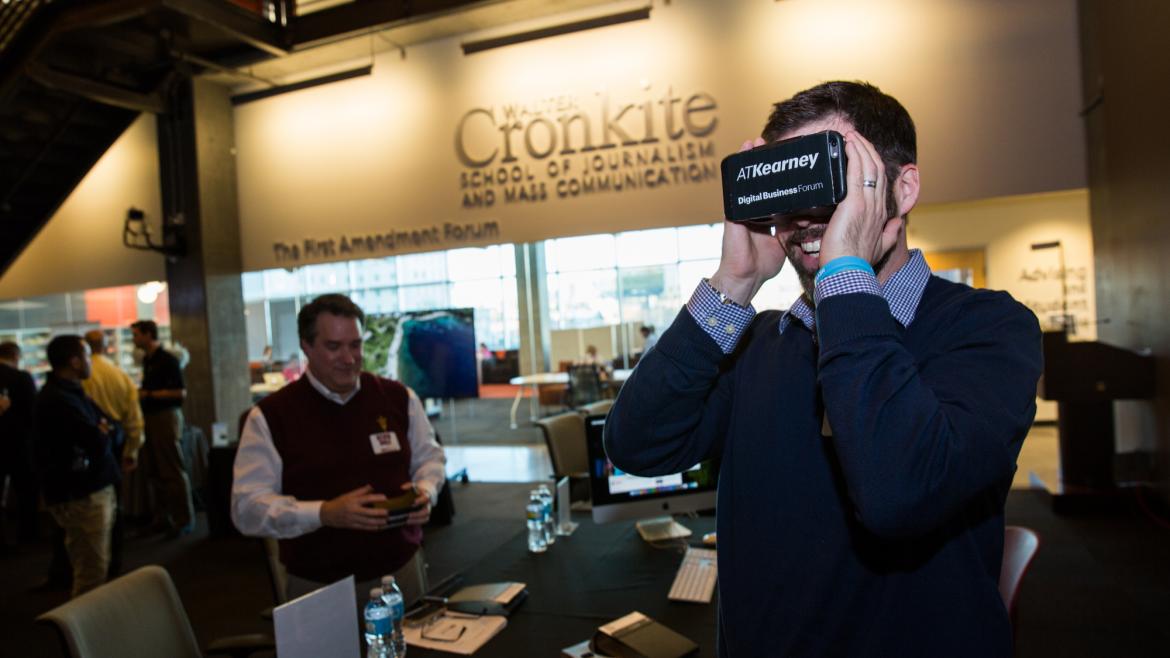 The Walter Cronkite School of Journalism and Mass Communication’s First Amendment Forum was a hive of digital activity Wednesday evening.

Telepresence robots syncing people from outside the room roamed the space, people were enjoying virtual-reality experiences through their smartphones and attendees were downloading new apps.

But the room wasn’t filled with software developers gathered at a tech expo; rather they were journalism students who saw the future and embraced it.

“Journalism today is about the power of the visual image and experiencing the world around you,” said Scotty Bara, a 21-year-old junior at the Cronkite School, who was holding up a small juice-glass-size 360-degree camera up into the light to check its capability and range. “It’s a stepping-stone for storytelling, and these experiences are going to shape the way we view news.”

Just as the digital era radically changed news content with the rise of high-speed Internet and mobile technology, the Cronkite School used its first-ever Innovation Day to demonstrate how the next wave of technology will impact the future of news coverage.

Retha Hill, who heads up Cronkite’s New Media Innovation Lab and who is the former executive producer for special products at WashingtonPost.com, headed up the first wave of digital products for the newspaper industry in the mid-1990s. On Wednesday she introduced students to Vrse, a specialized and focused production studio that supports virtual-reality spherical filmmaking from a variety of sources, including the New York Times, Vice News, “Saturday Night Live” and the United Nations. Picture a video story that allows the user to look all around, including up, down and behind, to fully explore a story.

Hill said Cronkite is developing an app similar to Vrse that will use a variety of emerging technologies, including a 360-degree camera, still photography, Google maps and virtual reality. 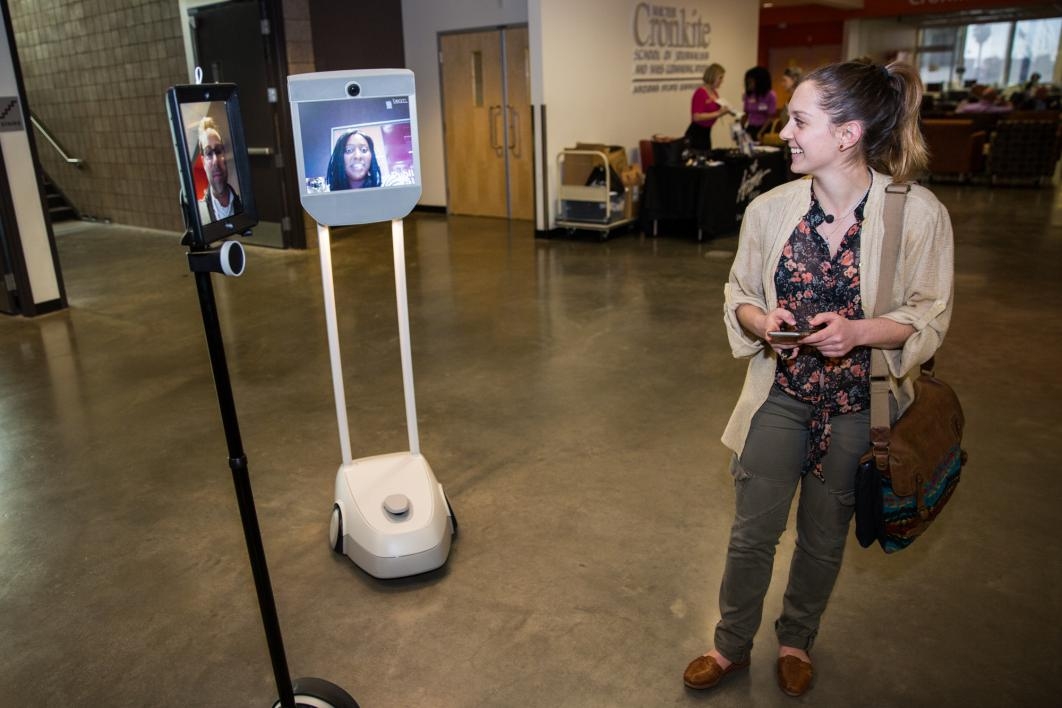 Senior journalism and marketing major Rebecca Savitz is greeted by Marc Sperber (left) and Monique Jones from EdPlus, who were showing of their telepresence robots at the Walter Cronkite School of Journalism and Mass Communication's Innovation Day on Wednesday, Jan. 20, at Arizona State University's Downtown Phoenix campus. 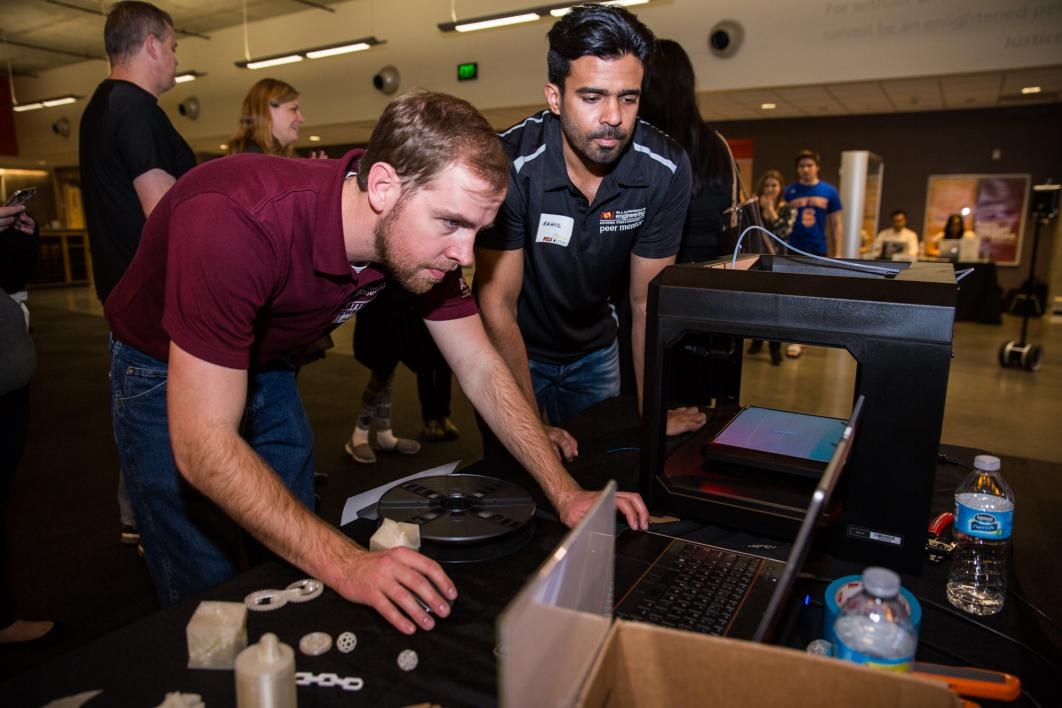 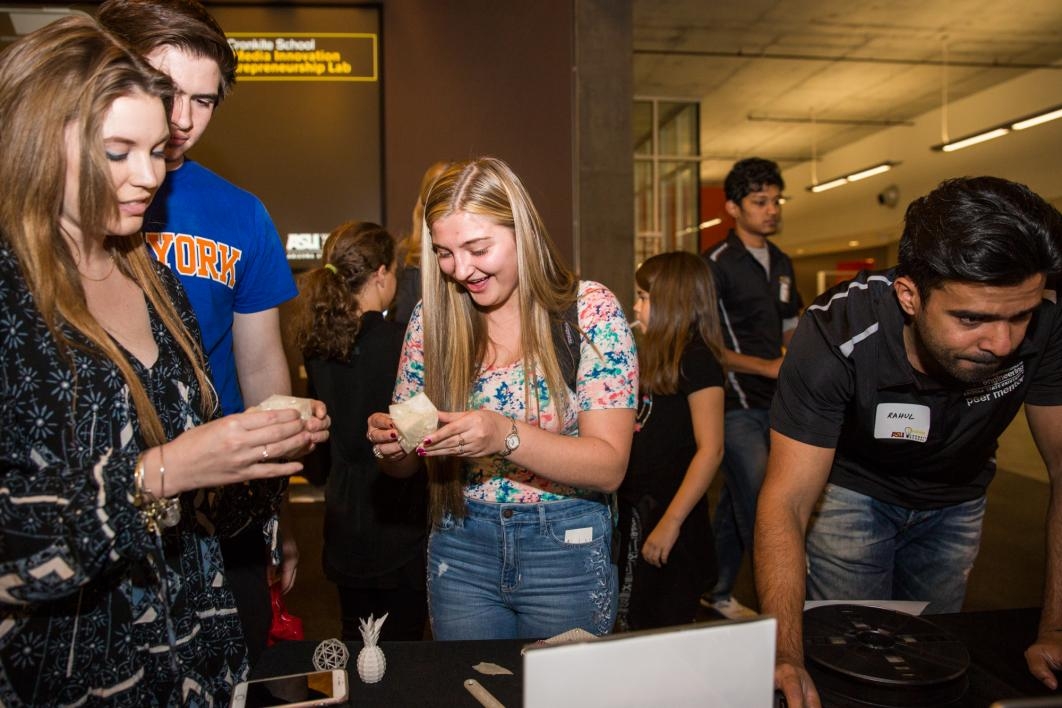 Freshman broadcast major Amanda Slee smiles as she checks out the 3-D-printed objects produced by the Ira A. Fulton Schools of Engineering. 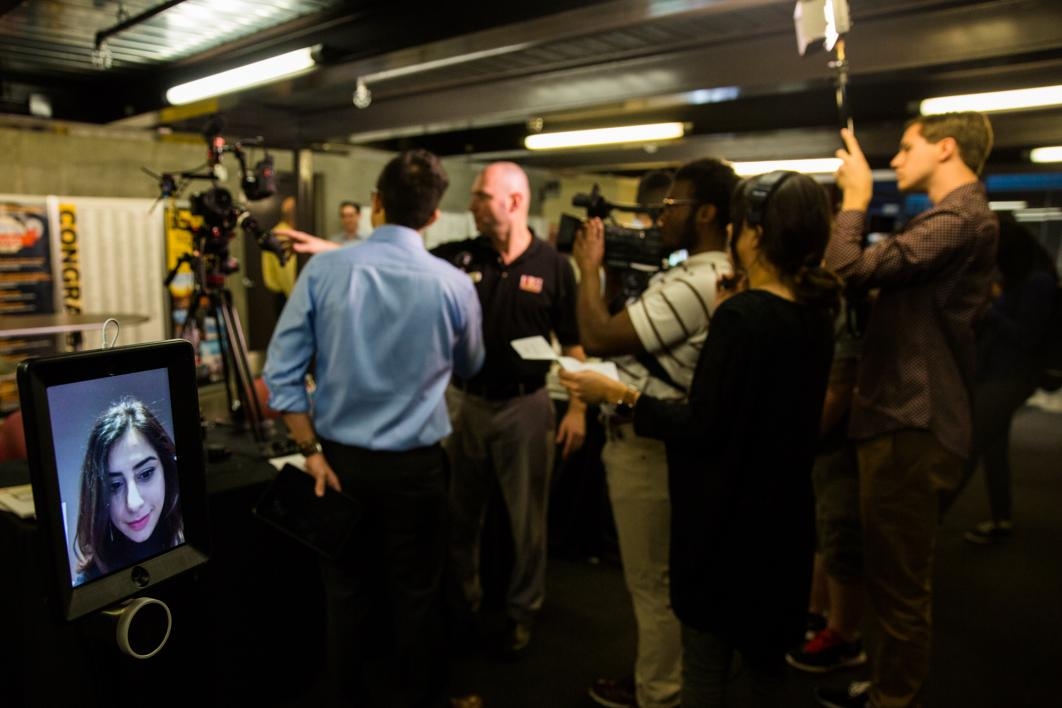 The Double Robotics telepresence makes its rounds of the tables during Innovation Day at the Walter Cronkite School of Journalism and Mass Communication. 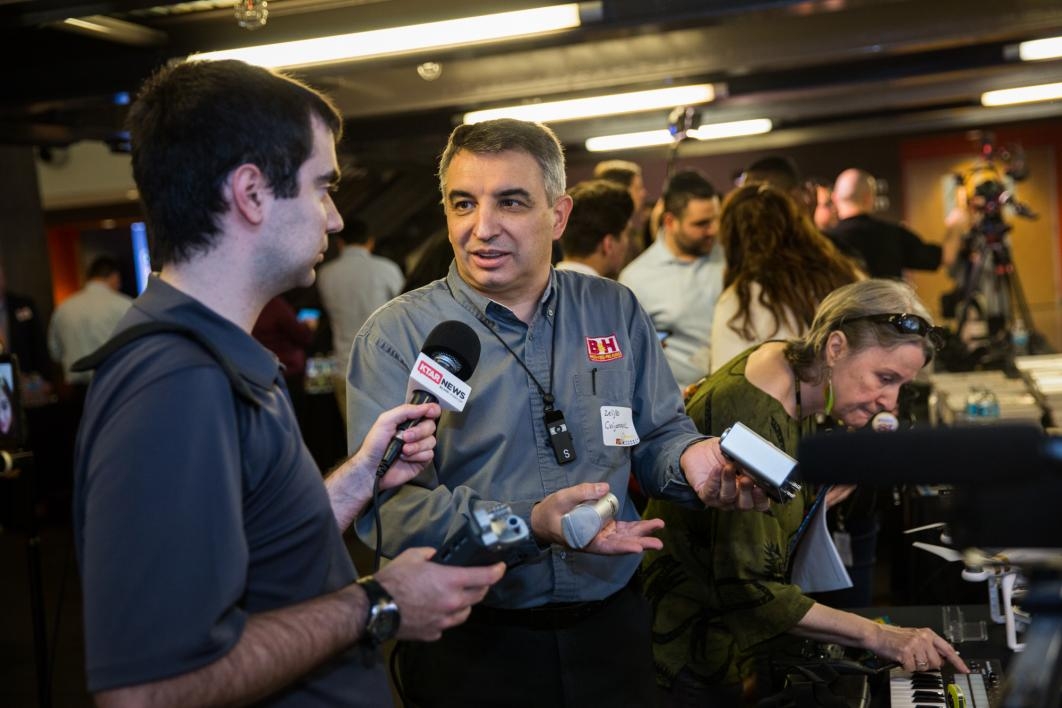 B&H representative Zeljko Cvijanovic shows off an audio recorder and equipment that B&H provides, some being donated to the Walter Cronkite School of Journalism and Mass Communication during Innovation Day. 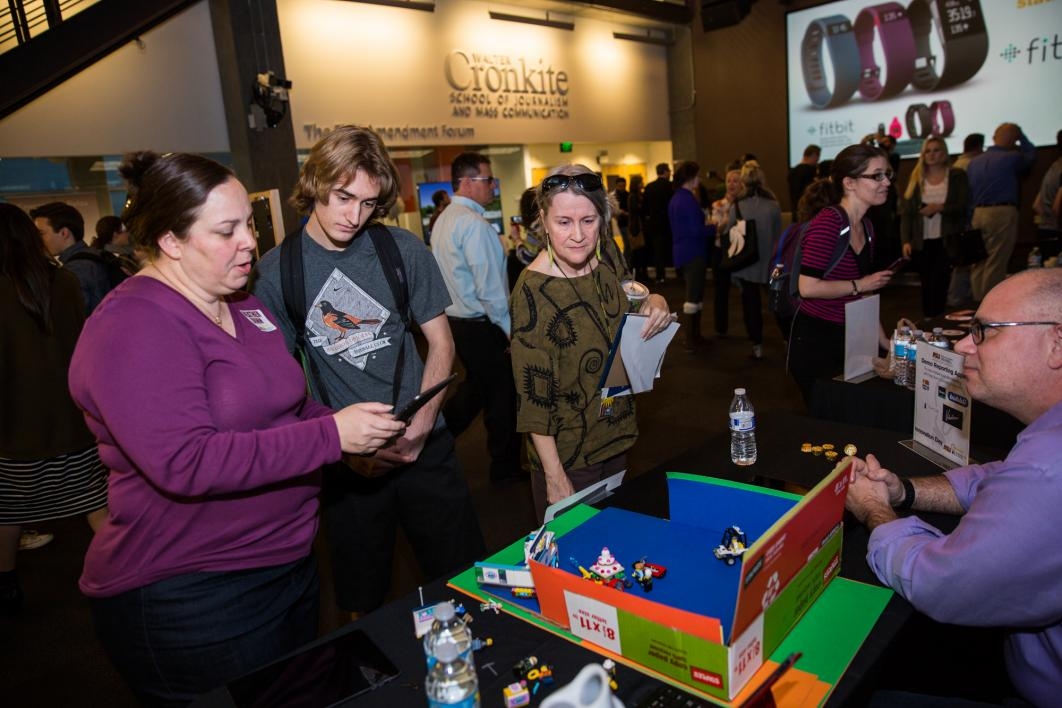 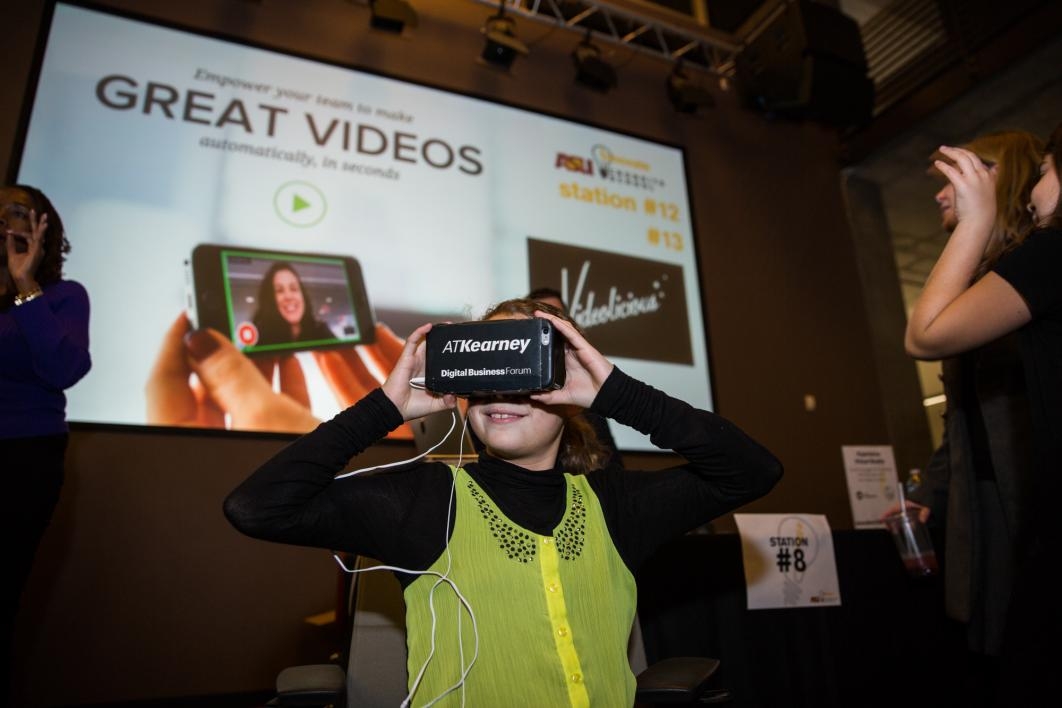 Mallory Alvarez tries out a virtual-reality headset that utilizes a phone inserted into a cardboard apparatus and creates a 3-D vision of the video being viewed during Innovation Day. 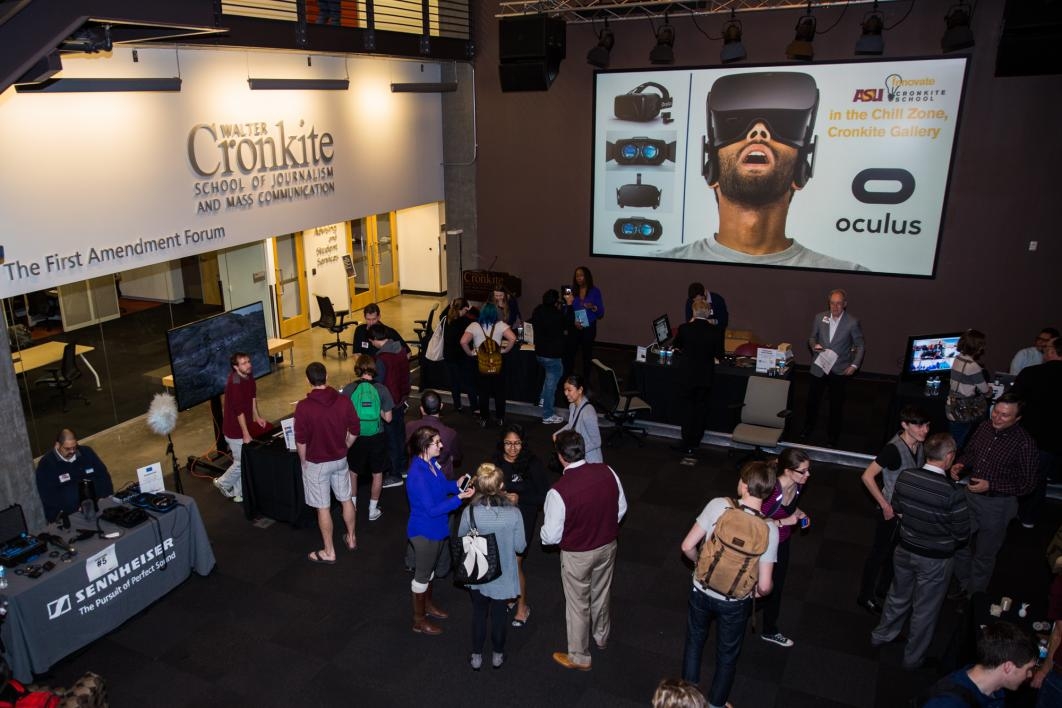 Hundreds of students flowed in and out of Innovation Day at the Walter Cronkite School of Journalism and Mass Communications on Jan. 20 on the Downtown Phoenix campus. 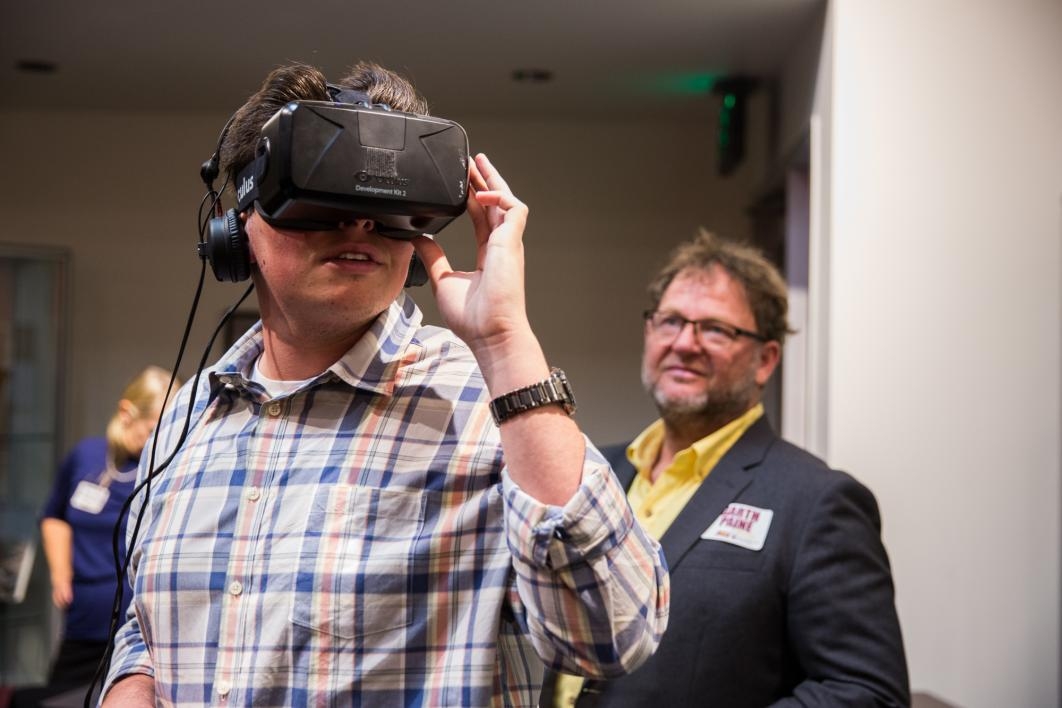 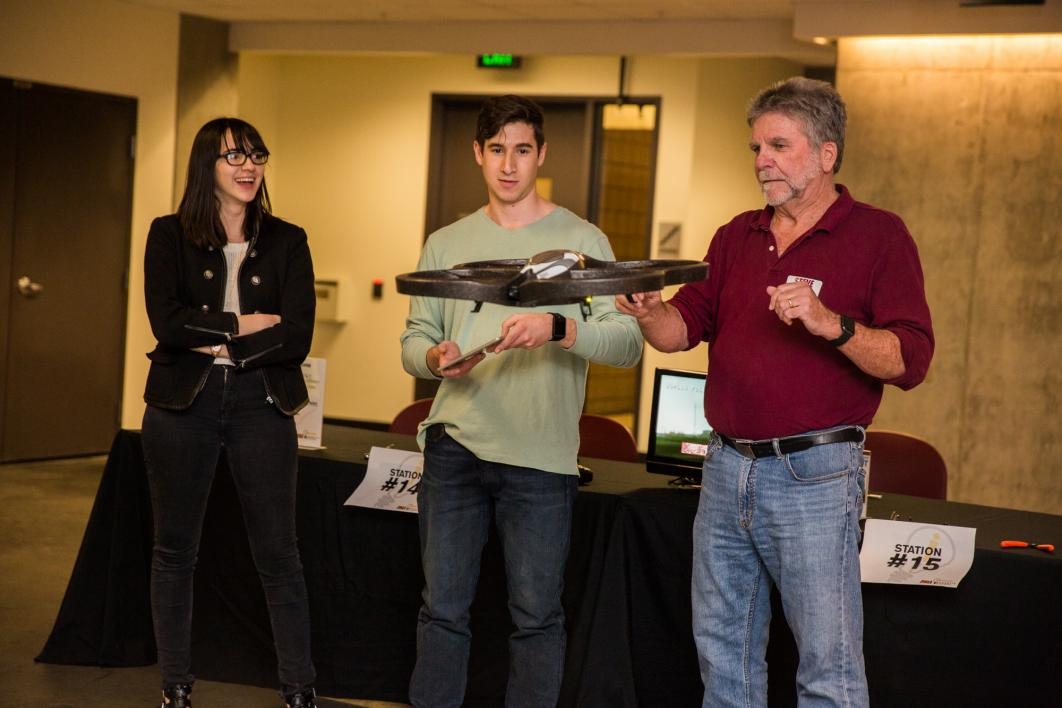 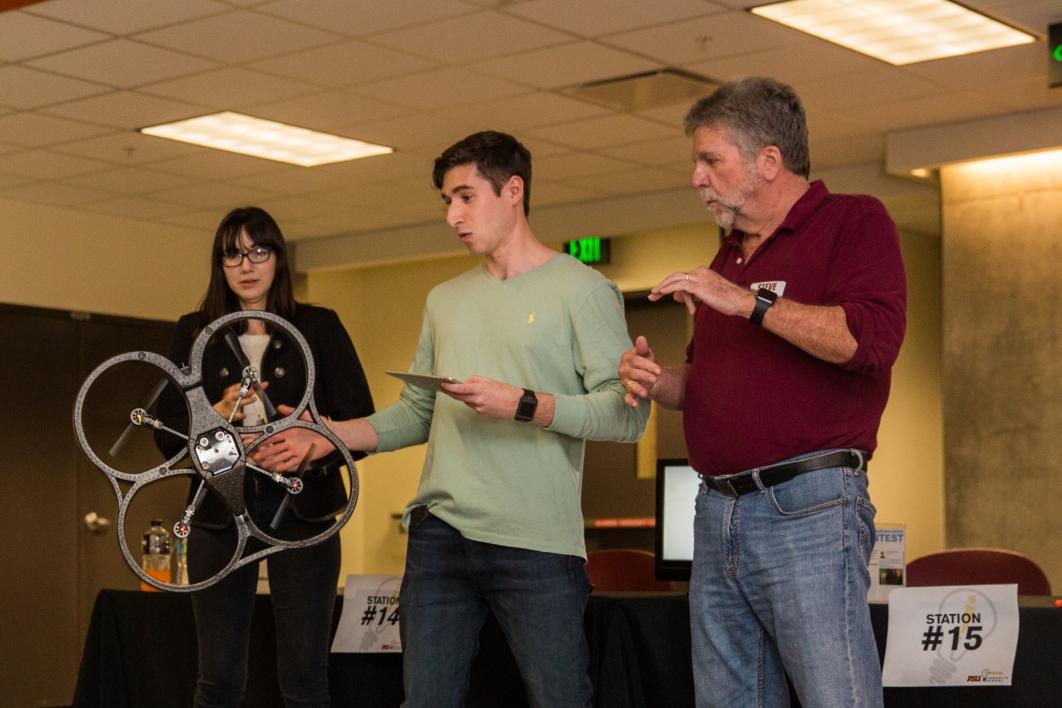 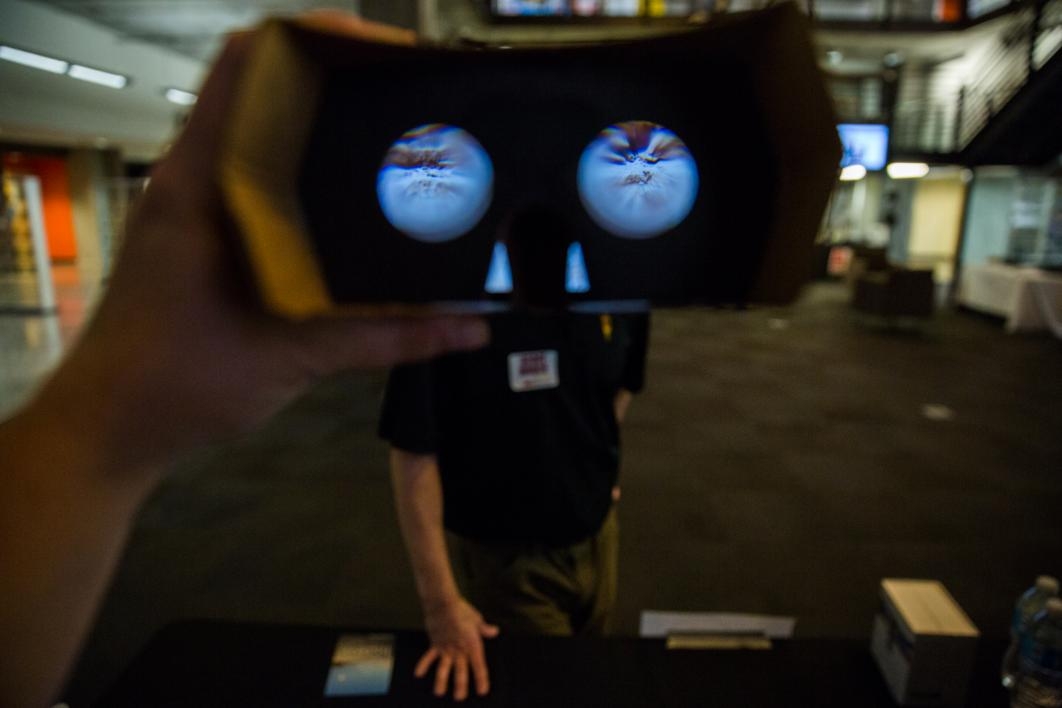 A view of virtual reality through the Google Cardboard app during Innovation Day. 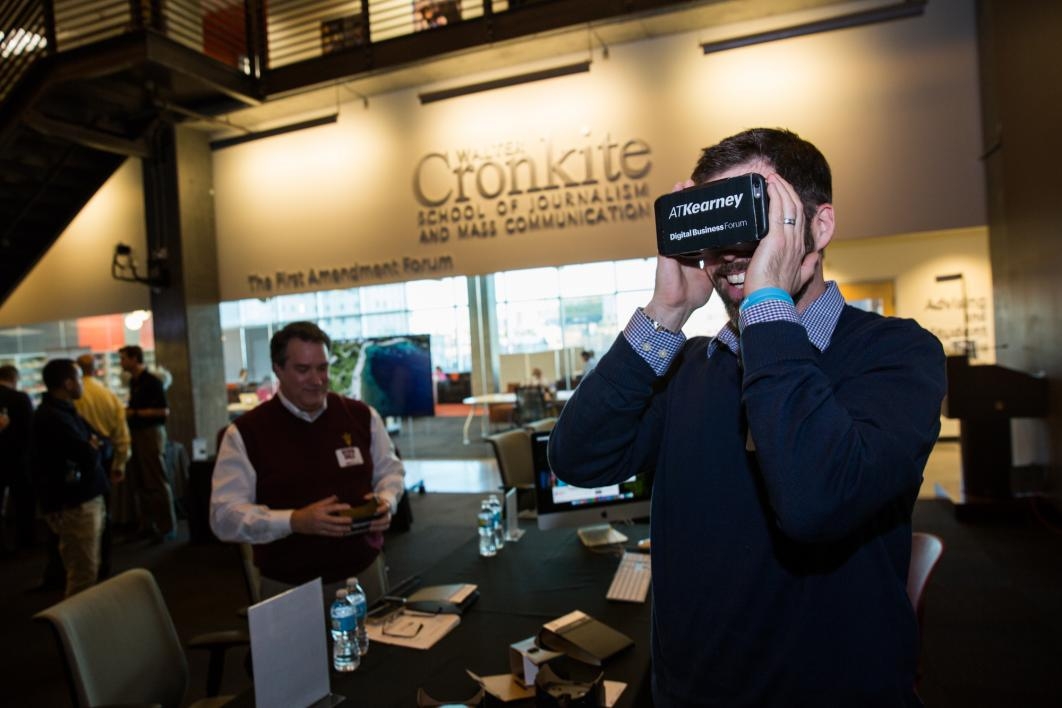 Brett Kurland, director of the Phoenix Sports Bureau and professor of practice at the Walter Cronkite School of Journalism and Mass Communication, tries out virtual reality by watching a video through a cardboard viewer during Innovation Day at the Cronkite School.

“Five years from now people will turn their entertainment rooms, that were once filled with large-screen TVs and electronics, into immersive media rooms where they can have virtual experiences and say, ‘Take me to Tahiti!’ ” Hill said.

Geoffrey Bruce, chief exploration software architect in ASU’s School of Earth and Space Exploration, wasn’t transporting students to Tahiti, but he was taking them on virtual fields trips to the Grand Canyon, Panama and Australia by way of his DJI drone and 4k camera. Bruce said his school is using the technology to teach geology students by taking them to hard-to-reach places. He also sees the possibilities in journalism.

“Let’s say a volcano erupts and you want to cover a story without putting anyone in danger,” Bruce said. “This drone is the best and most efficient way to do that.”

Nic Lindh, institution technology analyst for Cronkite, told students about new apps for reporters such as Bubbli, which gives smartphones 360-degree capability; Seene, which allows for tablets to have 3-D images; and TouchCast, which gives broadcasts pop-up graphics.

“The whole idea behind these apps is to put editing tools in their pockets with an eye to speed and quality,” Lindh said. “These new capabilities lead to all kinds of possibilities.

“Students are either comfortable with technology right away or they’ll say, ‘Take me out of my comfort zone and make me learn this.’ My job is to make them feel safe about using it,” Hill said. “Students who master these technologies will be the first in the newsroom to have a job — and that’s been one of my biggest selling points.”

Hot under the collar? Blame it on El Niño

Scientists reported Wednesday that 2015 was by far the warmest year on record, breaking a record that was set the year before, which has some wondering whether global warming is taking root.ASU climatologist Randy Cerveny, however, identified another culprit.Question: Were you surprised that 2015 is the hottest year on record?Answer: No. The primary reason for that warming is what we call is El Ni... Hot under the collar? Blame it on El Niño

2015 was the warmest year on record, and ASU's weather expert says 2016 will be hotter — but there's a silver lining

Scientists reported Wednesday that 2015 was by far the warmest year on record, breaking a record that was set the year before, which has some wondering whether global warming is taking root.

ASU climatologist Randy CervenyCerveny is a President's Professor in ASU's School of Geographical Sciences and Urban Planning, which is an academic unit of the College of Liberal Arts and Sciences., however, identified another culprit.

Question: Were you surprised that 2015 is the hottest year on record?

Answer: No. The primary reason for that warming is what we call is El Niño, a major warming on the Pacific Ocean. This El Niño is unprecedented in the last 50 years. The fact we are seeing such a warming globally is primarily attributable to the massive warming we are having in the Pacific Ocean.

The fact that we have had very warm temperatures over the past 20 years, particularly — we have had global warming happening at an accelerated rate — will make this more noticeable. But the primary cause is the warming we have in the Pacific Ocean.

A: El Niño is a periodic variation of sea surface temperatures. Normally the Eastern Pacific is cold and the Western Pacific is warm. About every five to seven years there is a surge back from the West to the East of warm water, and it comes along the coast of South America. When it happens we get this change in the storm track and the weather patterns, and it is something that pretty much affects the entire world. A: Yes, 2016 will be an incredibly hot year. The primary reason for that is because we still have El Niño going on. El Niño is a massive warming that began last June and will go on until April or early May of this year; consequently the temperatures we will have globally this year will be marked by that massive warming in the Pacific Ocean.

Q: What will we see as a result?

A: The primary thing that El Niño is associated with is precipitation in the South and Southwestern parts of the U.S. Our forecast for the next few months here in the Southwest is we are going to have many more rains and we will start to fill up some of the reservoirs that have been emptied over the last few years. This is the perfect kind of rains to break droughts.

The full interview with Randy Cerveny is available here.