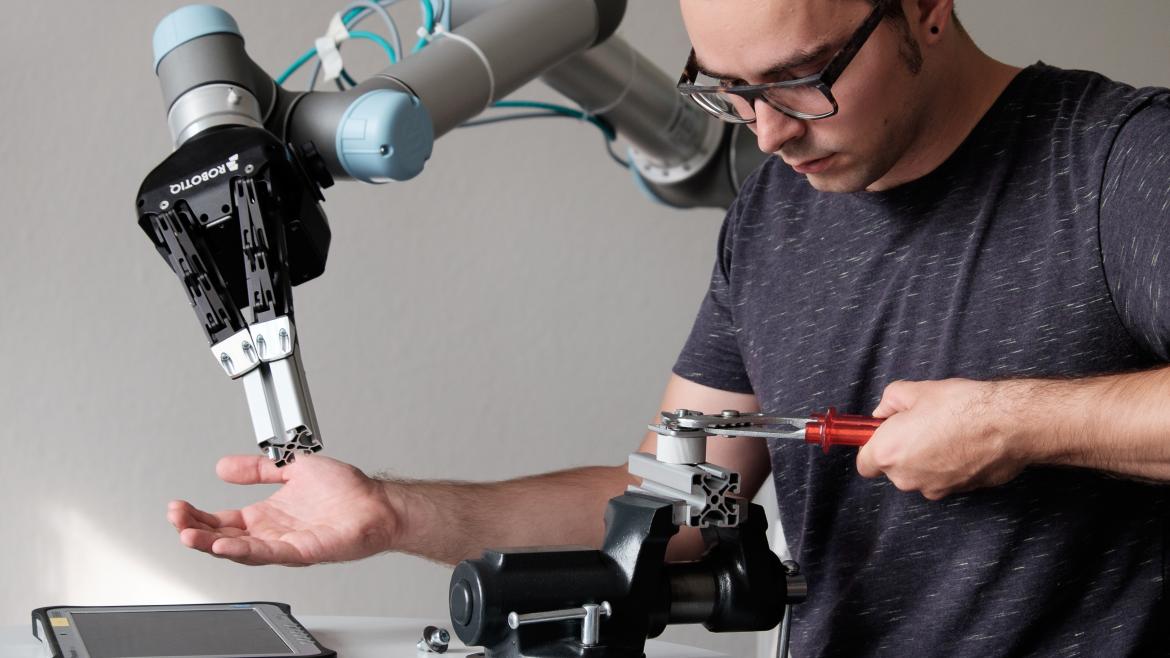 Narrowing gap between man and machine

Imagine an assembly robot that collaborates with a human to assemble a piece of IKEA furniture. The robot would need to analyze the movements of the human to avoid potentially hazardous collisions. 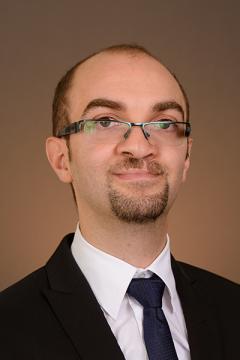 Heni Ben Amor (pictured left) is trying to make that situation become closer to reality by helping robots better understand and respond to human behavior. For instance, the assembly robot may learn that it must hand over a screwdriver whenever a human is stretching out an arm.

Ben Amor, an assistant professor of computer science and engineering in Arizona State University’s Ira A. Fulton Schools of Engineering, is working to make advances in human-robot collaboration and on identifying the importance of such collaborations.

“I develop new methods that allow a robot to work in close proximity with human partners,” he said. “To ensure safe interaction, autonomous robots need to include movements and actions of human partners into their decision-making process.”

There is a widespread misconception that robots will replace humans in all workplaces, Ben Amor said. While it is true that robots can perform mundane, repetitive tasks better than humans, there are still many tasks at which humans are way better than robots.

“For humans, opening a fridge is not a particularly difficult thing to do. For robots, however, this can be a daunting challenge.”
— Heni Ben Amor, ASU assistant professor of computer science and engineering

He believes in a combination of robotic strength and speed on one side, and human decision-making, creativity and dexterity on the other side of a symbiotic relationship between robot and human.

“A fascinating aspect of working with robots is discovering how challenging even presumably simple tasks can be for a machine,” he said. “For humans, opening a fridge is not a particularly difficult thing to do. For robots, however, this can be a daunting challenge.”

Even after having a human program all the steps involved, “it may actually take the robot more than five minutes to accomplish the task. It is therefore very inspiring to see how nature managed to find very elegant and versatile solutions to similarly difficult problems,” Ben Amor said.

“I am particularly intrigued by learning capabilities of biological systems,” he said. “Humans and animals often learn to adapt and change their behavior whenever faced with a new challenge.”

Human-robot collaboration has become an important aspect of many applications of robotic technologies, such as in the automotive industry.

There is a strong interest in bringing human and robot capabilities together. For many tasks, human skills remain important, but  other tasks could best be accomplished by the strength and agility of robots. Deploying robots to help humans in physically demanding tasks could, for instance, lead to a significant reduction in work-related injuries.

Ben Amor is intrigued by machine learning involving robots. He wants to find out if robots can learn how to solve tasks on its own, by employing a human-like trial-and-error strategy to acquire new motor skills or imitating observed human behaviors and learning to program themselves based on what they observe.

“One idea that I am particularly fascinated by is a robot that reads a manual to learn to program itself,” he said.

He expands on the idea of robot assembling IKEA furniture. All of the pieces of furniture come with a manual that is originally intended for humans. He hopes that in the future a robot could scan the manuals and extract the knowledge it needs to program itself to do the assembly.

“I think for the acceptance of robots in many application domains it is important to reduce the programming effort that is currently involved," he said. “Robot learning can help eliminate this effort and thereby enable even laymen to train or program a new robot.”

One area Ben Amor is looking to investigate further is bi-manual grasping and manipulation by robots. Typically, robotic technologies employed in manufacturing operations use only one arm to perform various tasks. He wants to develop methods that give robots increased dexterity so they can match the ability of humans in using two hands and arms.

Mayo Clinic-ASU Obesity Solutions has announced the 2016 winners of its seed funding competition. The seed funding program supports obesity-related pilot studies that will develop new collaborative teams or push forward highly innovative ideas with potential to receive significant external funding in the future.“The array of innovative proposals we received speaks to the breadth and depth of obe...

“The array of innovative proposals we received speaks to the breadth and depth of obesity research happening across ASU,” said Alexandra Brewis Slade, Obesity Solutions co-director. “We had a very strong pool to choose from, and are excited to see where these pilot projects go.”

Applicants were asked to propose projects related to obesity risk and suffering, health and health disparities in vulnerable populations, the patient experience, and technology and behavior change.

The winners, listed below, include ASU faculty and graduate students. Postdoctoral fellows were also eligible for funding.