Connecting university researchers with the larger business community can be a limiting factor in gaining research funding for applied technologies and ultimately creating new businesses and stimulating the local economy. The struggle often comes in connecting with potential industrial partners and learning about potential opportunities.

With that in mind, the Ira A. Fulton Schools of Engineering and Arizona Technology Enterprise are helping coordinate an effort to connect these groups with the hope of spurring future funding opportunities and accelerating technology transfer. The initial effort came in the form of the Technology Showcase and Networkshop on Dec. 4, which brought together more than 90 participants from local and national industry, the Arizona business community and ASU faculty and researchers. 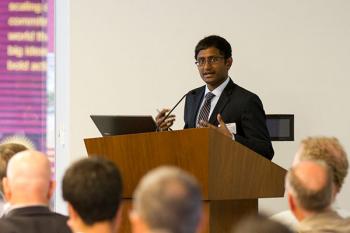 The goal was simple, break people out of their silos and help create possible collaborations and, eventually, new ventures in Arizona.

“In the last 10 years ASU has seen exponential expansion,” said Yong-Hang Zhang, associate dean for research in the Fulton Schools. “Our school has also enjoyed tremendous growth. I thought we should really do more in terms of collaborating with local industry, the local business community through tech development.”

“We realize the value and asset of ASU,” said Tim Becker, a senior vice president for Bank of America. “We don’t think the community as a whole has told the story of ASU very well. We are very interested in helping tell that story with events like this.”

Other attendees, such as Jonathan Ariano, partner with the law firm Osborn Maledon, were interested in helping foster tech transfer from the universities to smaller companies and start-ups.

“The Arizona startup ecosystem has a bunch of different groups right now and I think a big part of that are the universities,” he said. “There’s a lot of tech coming out of the universities and it is really critical to get those commercialized. We represent the companies that are trying to do those commercializations, so, anything we can do to help get that technology out of the hands of university to startups, we want to be a part of."

On the faculty side, participants saw it as an opportunity to discuss their research efforts and meet with potential partners.

“I am here to meet with local leaders to see how we can better transfer ideas from Fulton out into the small businesses,” said engineering professor Tom Sugar. “We have done it but we don’t have a base here in Arizona like there is in the Silicon Valley. But hopefully Arizona can build that base here and students and faculty can really push to start companies.”

For Zhang, this is only the first step in building these relationships. He hopes to talk with the other organization and participants and determine future events. At the very least, the Technology Showcase will likely become an annual event. As one of the many follow-ups, the Fulton Schools and the Arizona Commerce Authority co-hosted an event to discuss the newly announced Naval Sea Systems Command SBIR/STTR, featuring a webinar streamed from Boston on Dec. 16.

The event drew more than 40 people from the Fulton Schools and the industry sector in the valley and Tucson. NAVSEA Program Officer Jonathan Laggett was in attendance and provided one-on-one advice to interested attendees on the structure and evaluation criteria of SBIR/STTR grants.

“It is heartening to see the Fulton Schools of Engineering taking such an important step in the right direction to provide a much needed platform for both industry and ASU build a long-lasting technology partnership,” said Jill Howard.

When Mike Orr accidentally made a million dollars, it set him on a path toward his role as the Valley’s real-estate guru.That was back in 2002, when Orr sold his Silicon Valley house during the real-estate frenzy.“My timing was perfect, although it was accidental,” said Orr, who is director of the Center for Real Estate Theory and Practice in the W. P. Carey School of Business at Arizona Sta... 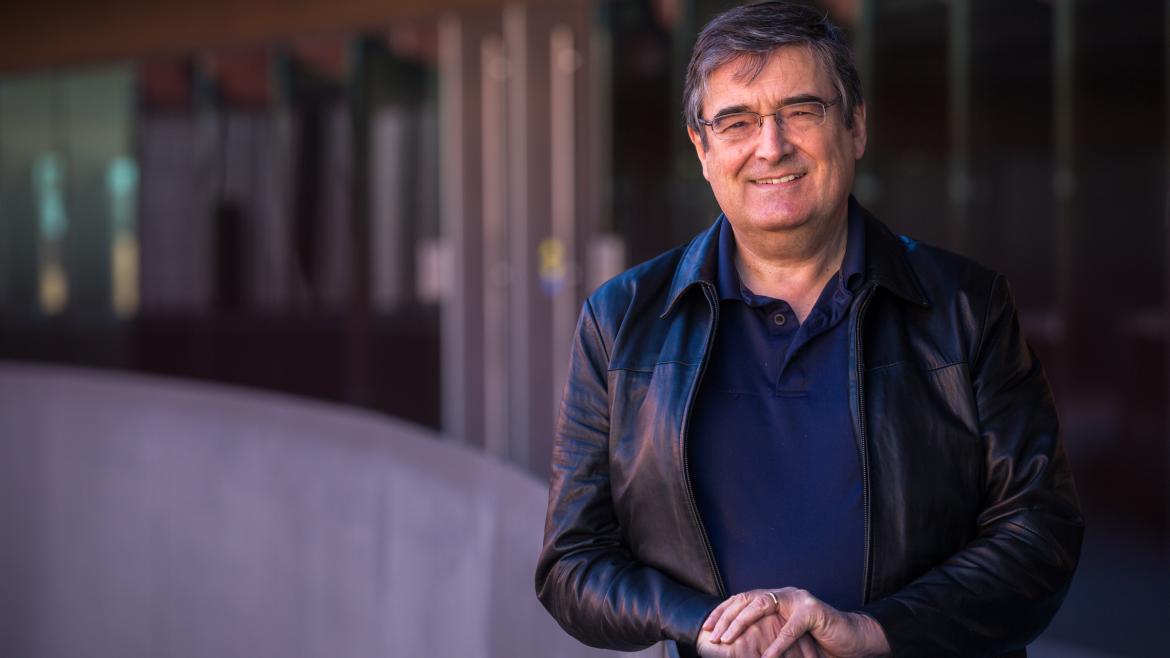 Tempe campus
ASU's real-estate guru sees stability, with shadows on the horizon.
After ASU's Orr made a $1 million by accident, he became a real-estate guru.
December 30, 2015

When Mike Orr accidentally made a million dollars, it set him on a path toward his role as the Valley’s real-estate guru.

That was back in 2002, when Orr sold his Silicon Valley house during the real-estate frenzy.

“My timing was perfect, although it was accidental,” said Orr, who is director of the Center for Real Estate Theory and Practice in the W. P. Carey School of Business at Arizona State University.

After making a seven-figure profit on a house he owned for just six years, Orr moved to Arizona and turned that serendipitous start into a new career. He used his math and computer science background to analyze and forecast real-estate trends in the greater Phoenix area. In the process he became one the first analysts to spot the beginning of the housing bubble, in 2004, and was one of the first to predict the recovery, in 2009.

“Real estate is not like Wall Street, where it’s very unpredictable and people can change their sentiment in the afternoon and back again the next morning,” he said.

Orr produces the Cromford Report, a monthly housing update that’s quoted by media all over the world. He uses cold, hard analytics to spot trends in a field that’s often driven by sentiment.

“You have to be very focused on the numbers and not let emotions get into it,” he said.

Orr was born and raised in England, and after earning a degree in math, he worked for IBM and then the Amdahl Corp. in sales. In 1992, he moved his family to California because Amdahl thought that an Englishman would have a better handle on how to sell to Europe.

The work was financially rewarding but intense, with long hours. So in 2002, he took a big plunge, selling his house in San Jose and pondering the rest of his career. The Orrs ended up in the Valley of the Sun, choosing Mesa for its family-friendly atmosphere.

Then he became a real-estate investor — also by accident. Orr and his wife wanted a house with a basement, but the contractor said it would take a year to complete. So in the meantime, they bought a house without a basement.

“When it became time to sell that house, the market had gone a bit quiet,” Orr said.

So they rented it out.

“The experience of buying and selling houses interested me,” he said. “I thought if I made so much money by accident, maybe I could make more by really trying.”

So he started reading books and got his real-estate license.

“I didn’t really want to be a Realtor. But I wanted the information they had. I’ve always been fascinated by data and collecting and analyzing it.”

In 2004, he began downloading data from the Arizona Regional Multiple Listing Service — the giant database of all houses for sale in the greater Phoenix area. He analyzed the numbers, hoping to glean investment insights.

“But then I looked — this is telling me it’s not a good time to invest. The market is getting very frothy,” he said as he watched housing prices climb ever higher.

“I was stumped. I felt I had a lot of information but I wasn’t able to use it.”

Then he had the idea of creating a report for other Realtors. Although there was a lot of data about commercial real estate, Realtors were hungry for accurate information about single-family residential housing.

“People said, ‘Can you tell us when it would end?’ As it turned out, I could.”
— Mike Orr, on the housing crash

Phoenix was the perfect place to do that. For one thing, the amount paid for a house is public information in Arizona, unlike many states that keep prices secret.

“And not only the price, but in Arizona, you’re legally bound to report the type of financing, the down payment, where the buyer is coming from — lots of really useful information,” Orr said.

Also, the Valley is unique in that one multiple-listing service covers all of Maricopa and Pinal counties. Orr said that elsewhere, small areas can have many services, making data-gathering complicated.

Orr’s idea was brilliant because while there was a lot of information, most of it was useless.

“The data is terrible when you first get hold of it because it’s mostly handwritten and nobody double-checks anything,” he said.

“Houses are listed in the incorrect ZIP code or with incorrect square footage. Or they put an extra zero on the end of the price — which happens more than you think,” he said.

He devised a system to detect and fix errors in the data so it would be more reliable. Then he put it all together into the Cromford ReportSo named because he used to live on Cromford Road. "I thought it sounded English, too. I had already discovered that having an English accent in America is a big advantage." and created a website to sell it.

Everything went well until the Arizona Regional Multiple Listing Service sent him a cease-and-desist letter, asking him to stop profiting from its information. Orr negotiated with the organization, which agreed to buy a subscription and send his report to all its agents.

As the market continued its plunge through 2008, Realtors were desperate for good news.

“It was astonishingly bad. People said, ‘Can you tell us when it would end?’ As it turned out, I could.”

At the end of March 2009, Orr noticed that the price of houses put into escrow started ticking up — before actual sales prices bottomed out. This signaled the start of the turnaround.

“It’s invisible to the public because it’s taken off the market, but it’s powerful information,” he said.

He was so confident in his insight that he bought two investment houses himself that year, and ended up on the front page of the Arizona Republic for his forecast.

“A lot of people said, ‘Rubbish, he’s wrong.’ But that was when prices stopped going down.”

He sold one house for 75 percent profit and still rents out the other one.

“I didn’t buy any more because I didn’t want to borrow money,” he said. “Also, the actual job of being a landlord sucks.”

“The collapse came from inside the housing market because we were feeding too much money into it because of lenders who would lend to anybody,” he said — a situation that no longer exists.

In 2012, ASU reached out to Orr, asking him to lead the university's real-estate research center. He now produces a monthly subscription housing report for ASU that includes interactive charts.

“I think it’s some of the best stuff available from a university anywhere,” said Orr, whose Cromford Report is available at his own website. He has since ended his partnership with the Arizona Regional MLS.

Orr said that housing prices in the area are neutral now, with higher demand for dwellings in the $200,000 range in the central Phoenix area and less demand for more luxurious homes on the fringes of the Valley. Condo prices have also increased more than single-family dwellings over the past year.

Orr said that the Phoenix housing market is stable, but he worries that the global plummeting price of oil, iron ore and commodities such as beef could create job losses, which might affect Arizona. If that happens, and it disturbs housing prices, he’ll see it.

"I’ve discovered that people want accurate information no matter the state of the housing market.”