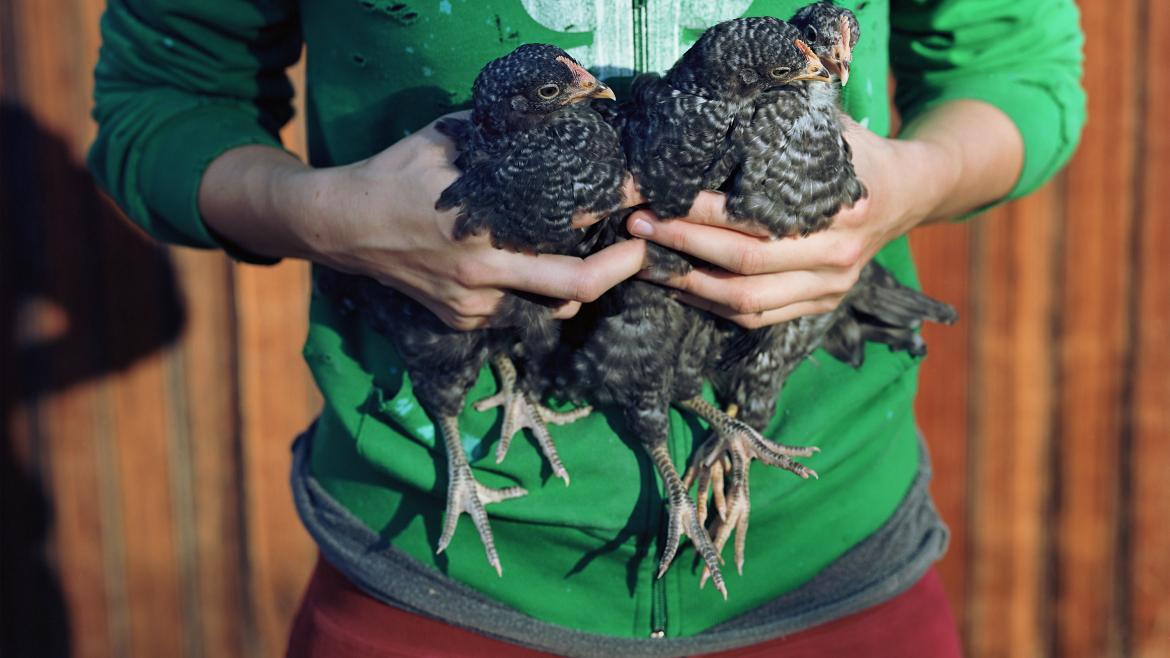 “The objective is to teach the student to see the land, to understand what he sees, and enjoy what he understands”
—  Aldo Leopold, from “The Role of Wildlife in a Liberal Education”

As a high school student in rural Wisconsin, Edgar Cardenas liked to draw. But after high school he stopped creating art, “because I thought I was supposed to be a grown-up.”

No one in Cardenas’ family had finished high school — not his mother and father, who were both immigrants from Mexico, or his stepfather, a devout Jevovah’s Witness who considered higher education a distraction from religion. Even the guidance counselor at the high school assumed Cardenas wouldn’t continue his education: When he expressed interest in a psychology class, the counselor told him that was for students who were going to college.

Cardenas took the class anyway. He got an A.

Years later he has earned his doctorate from Arizona State University's School of Sustainability as a photographer who brings an artistic view into the scientific world.

After high school, Cardenas knew, he was “supposed to” get a job. He said he tried, first building fiberglass semi trailers, then cellphones on the factory line at Motorola. But he couldn’t do work he didn’t enjoy, he said. He decided to go to community college. He also joined the U.S. Marine Corps Reserve.

Unaware that there was such a thing as financial aid, he worked as a night janitor for the Beloit school district to support himself while he took classes, sleeping when he could. After a few years, he transferred to Gordon College, in Massachusetts, where he received a bachelor's degree in psychology. From there, he went on to graduate school at the University of New Haven and earned a master's degree in industrial/organizational psychology.

It was only after his master's program that he found his way back to art by starting to take photos. At the time he was working as an organizational development consultant, once again doing the thing he thought he was “supposed to do.” But his heart wasn’t in it.

One day he walked into a gallery in New Haven and encountered the photographs of Walker Evans. He met the curator, John Hill, who had provided the work for the exhibition and knew Evans personally, and they started talking. One thing led to another, Cardenas said, and he began working in Hill’s studio and getting an informal education in the history of photography. 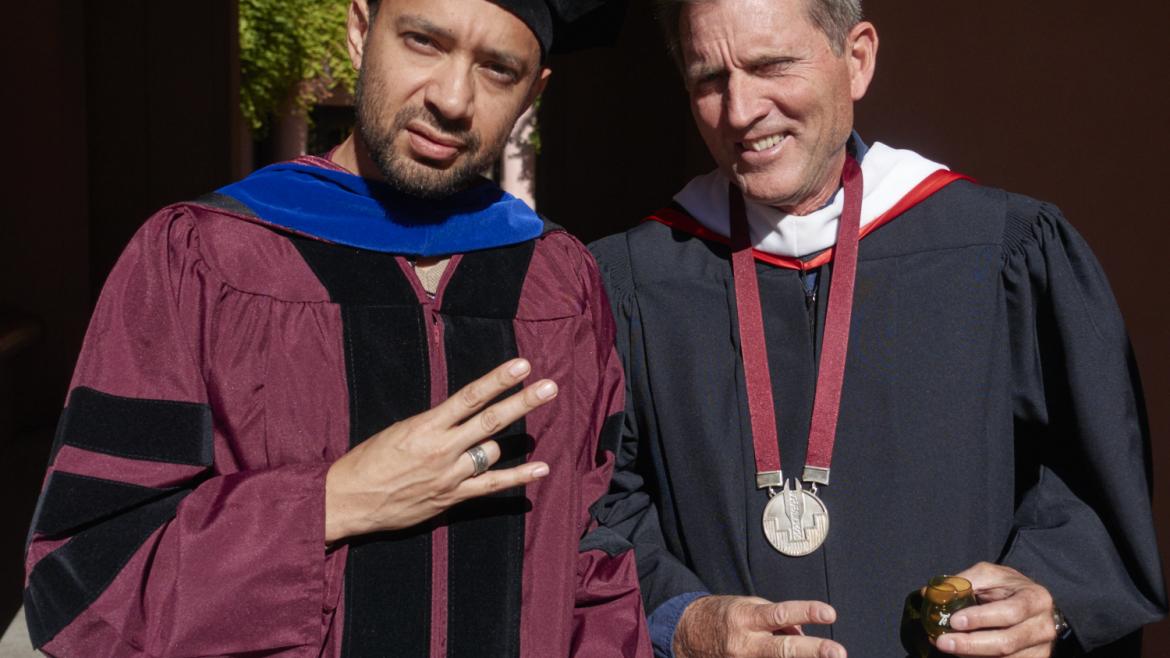 “I was working as a consultant still,” Cardenas said, “but I didn’t like the work. Then the firm disbanded and they asked me if I wanted to go to another firm. And I decided that no, I wanted to be a photo assistant.”

He took a significant pay cut to go to work for New Haven photographer Robert Lisak, a Yale MFA grad. He also started studying for his GRE, because he’d learned about the School of Sustainability at ASU and was interested in applying and earning a doctorate.

“Sustainability was attractive (to me) because of its interdisciplinarity,” Cardenas said. “I knew when I applied to ASU that what I had wanted to do was blend image-making with the sciences.”

By his second semester at ASU, he had connected with renowned geologist-turned-photographer Mark Klett, an ASU Regents' Professor, who invited Cardenas to take his Photography Fieldwork course, which pairs trained photographers with scientists. Cardenas explains the course as “understanding Phoenix through image-making,” in the spirit of the old survey photographers who came out and documented the West.

“[Graduate students] at the University of Arizona, where I’ve gone to speak a few times, all say, ‘You guys are doing the creative stuff up there. We’re not allowed to do stuff like that.’ ”
— Edgar Cardenas, ASU doctoral graduate from the School of Sustainability

First, he found his art community.

“Before coming to ASU, I had mentors, but I didn’t have a cohort,” he said. Once he had a community, “we could comment on each other’s work. It was a way of getting me up and running on the ideas I wanted to explore and how I wanted to communicate them.”

Second, he was able to continue his pursuit of projects that combined both art and science.

“Artists and scientists do a similar thing,” Cardenas explained. “They take data and they organize it. They just do that differently.”

For his culminating project, Cardenas looked close to home.

The body of work he produced is called “One Hundred Little Dramas.” Cardenas observed and documented, through photography and video, how he transformed the backyard over the course of three years. That transformation involved collecting what amounted to hundreds of pounds of compost from the School of Sustainability, plus people’s discarded leaves and wood chips.

“I told people, bring me the waste so I can use it as input for my garden. I was changing the backyard in these ways that would transform it into a different ecological space. I was aware that I was building a habitat for lizards, for birds. I would learn about where the lizards would lay their eggs so we wouldn’t step on those spaces. I saved many baby birds and took them to an aviary. I planted sunflower seeds for the birds. You get in tune with the rhythm of the space.” 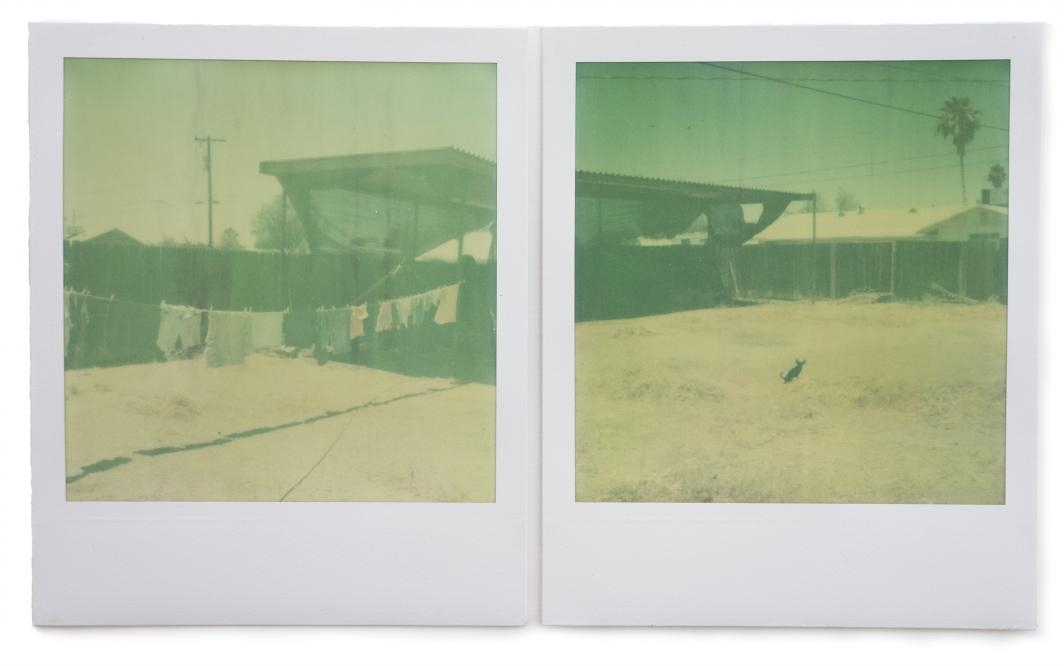 One of the first images of Edgar Cardenas' backyard, in Oct. 2009. Cardenas decided to use the space to build an ecological space that became a habitat for lizards and birds. His photographs of the transformation became a project titled "One Hundred Dramas." 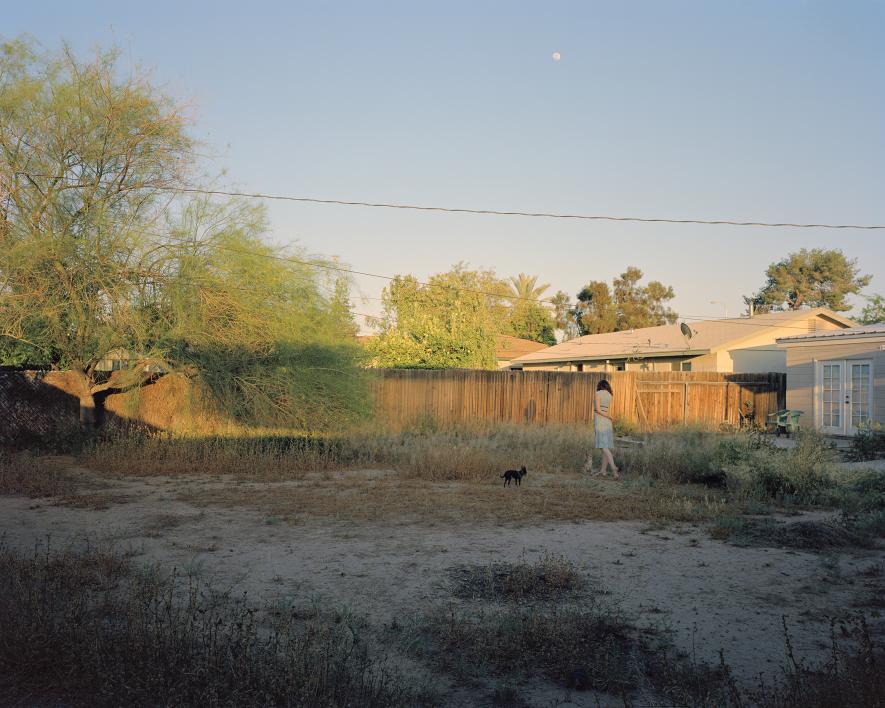 The backyard's brush growth, two months after heavy rains, on May 2010. Young chickens that were given to Cardenas, November 2010. They became residents of the backyard. 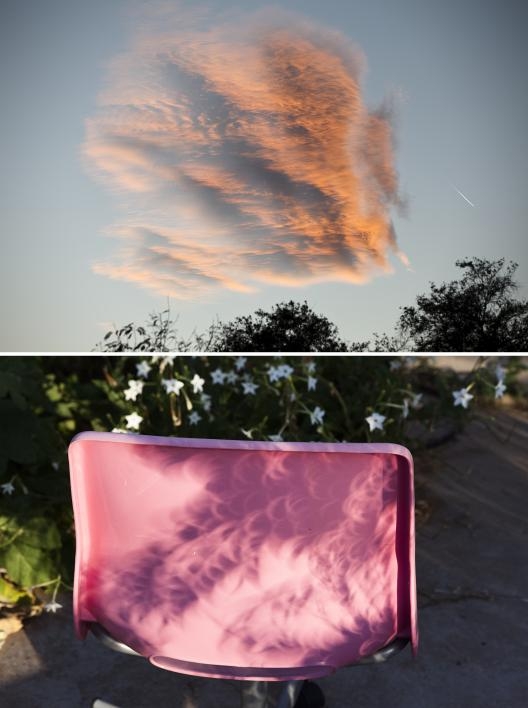 Of the many sights seen from and in Cardenas' backyard, there images and instances that were reminiscent of others. Like this cloud, from January 2011, and eclipse obscura on the back of a chair, from May 2012. 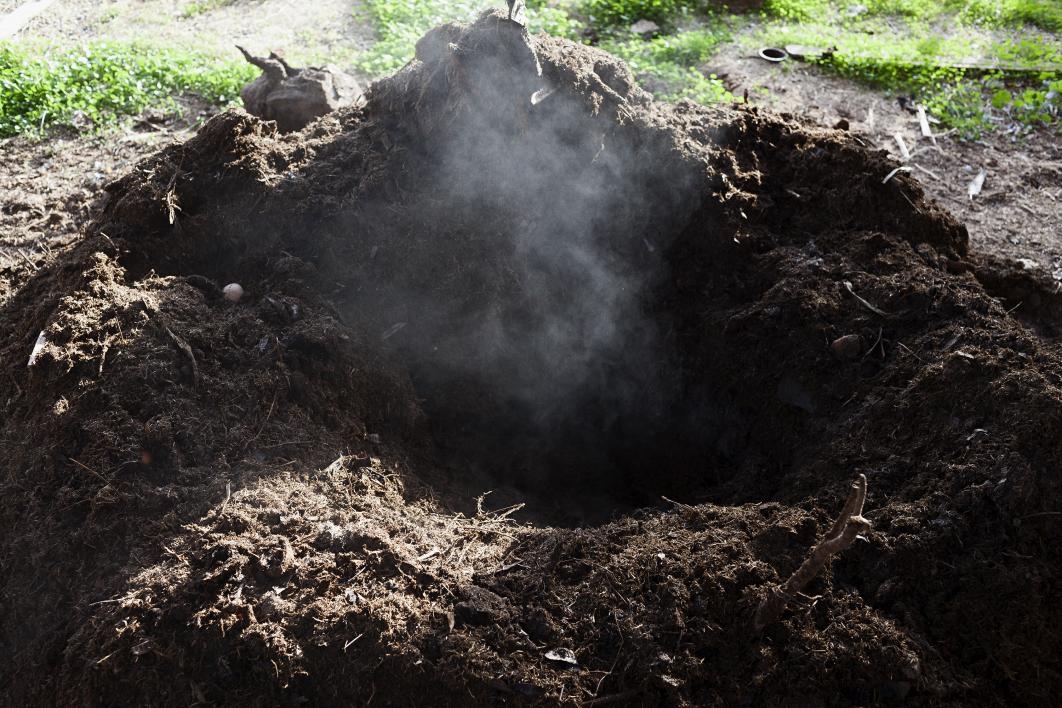 Steaming compost comprised of waste collected from the School of Sustainability and community members, shown on December 2011. 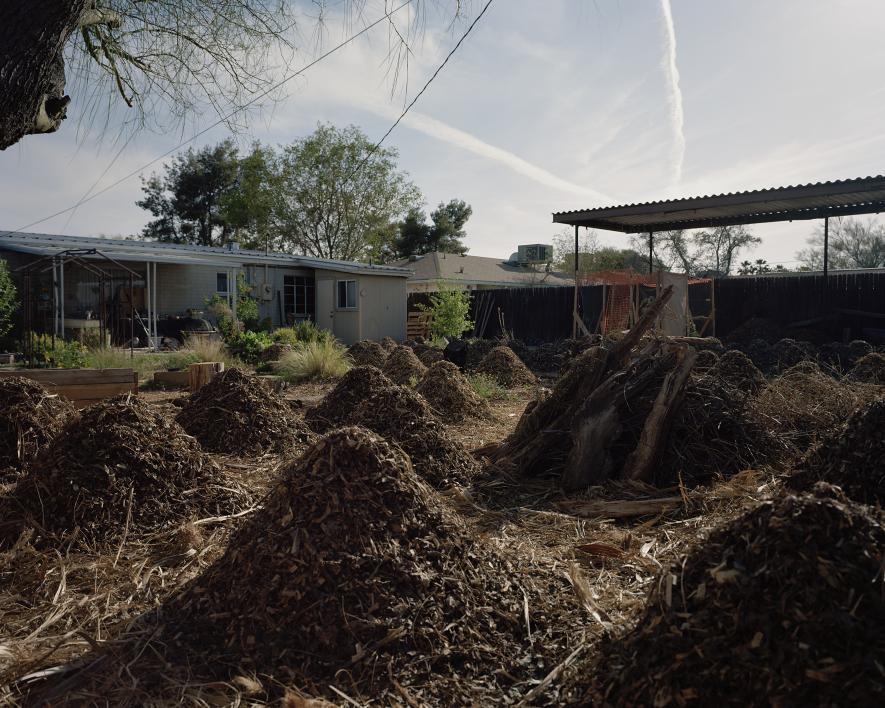 Chipped trees collected, then transported via wheel barrel, into the backyard in March 2012. Not all the finds in the backyard are joyous. Here, a juvenile pigeon that was recently killed by a feral cat, in July 2012. 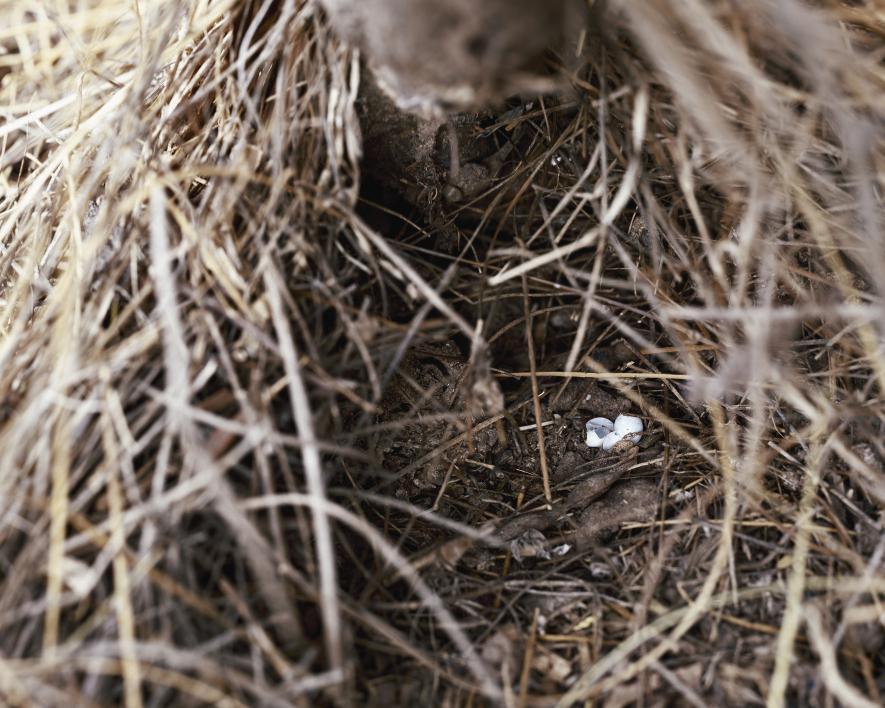 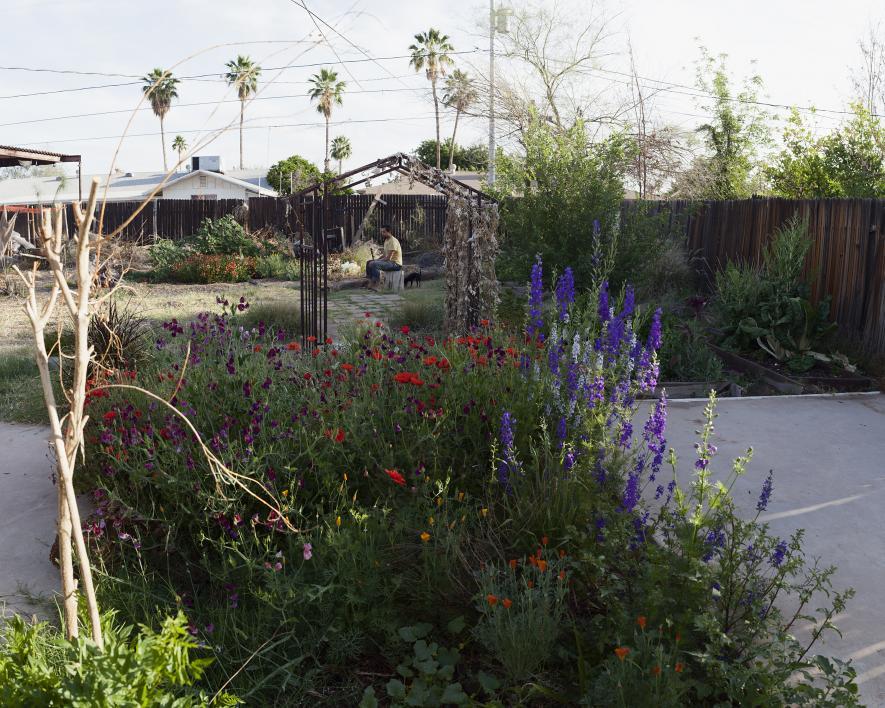 The final image of the backyard, and Cardenas' work, before he moved out of the property in May 2013.

For Cardenas, the work wasn’t just about documenting a place. It was about understanding that place on multiple levels.

“Understanding how ecology works in these little places, that transforms the way you see places you hike, for example. It changes your perspective on the world.”

Cardenas said he doesn’t think he could have produced his dissertation, which gave equal weight to the arts and to the sciences, anywhere but at ASU.

“I brought together perspectives on aesthetics and Aldo Leopold’s relevance to sustainability, produced a thesis exhibit, and then conducted a social psychological study, all under the sustainability umbrella,” Cardenas said. “These three components would not have come together anywhere else.”

“It’s a double-edged sword when you have a program that is very interdisciplinary,” Cardenas said. “You have a lot of rope to hang yourself. But if you’re going to do a project that’s really innovative, you need a lot of rope to run around. And they provided me that.

“People [graduate students] at the University of Arizona, where I’ve gone to speak a few times, all say, ‘You guys are doing the creative stuff up there. We’re not allowed to do stuff like that.’ ”

“Edgar was the first student to pursue such an ambitious agenda integrating art and science, and he was equally proficient in both,” said Klett, who hooded Cardenas at the School of Sustainability graduation ceremony on Dec. 15. “His research was groundbreaking, and it opens the door for future students to pursue a similar path in art and science.”

According to School of Art director Adriene Jenik, the success of Cardenas’ work has helped pave the way for discussions about the possibility of a concurrent degree in art and sustainability, which she sees as a natural fit. In addition to Klett, both Julie Anand and visiting artist Christine Lee teach courses in the School of Art that combine art and sustainability.

Whatever Cardenas does going forward, it will involve both art and science. On his website Cardenas lists himself as an “artscientist,” and he believes that both disciplines benefit from the marriage of the two.

“Art and science provide us with different kinds of information,” he said. “I don’t think they can be overlaid. They come together like a puzzle. I find that the sciences provide us with rich data on the dynamics that are taking place in the world. But that information has to be coupled with our value structures. Art raises that awareness — it raises questions about what we want in our lives and how we think about that more deeply.”

Arizona State University has been named to Kiplinger’s Personal Finance’s list of the top "best college values" of 2016.According to the magazine, ASU is one of the top 100 best values in public higher education for in-state and out-of-state students, as measured by academic quality, freshmen retention and persistence rates, and affordability. “We start with a universe of 1,200 schools, so ...

Engaging in science through art 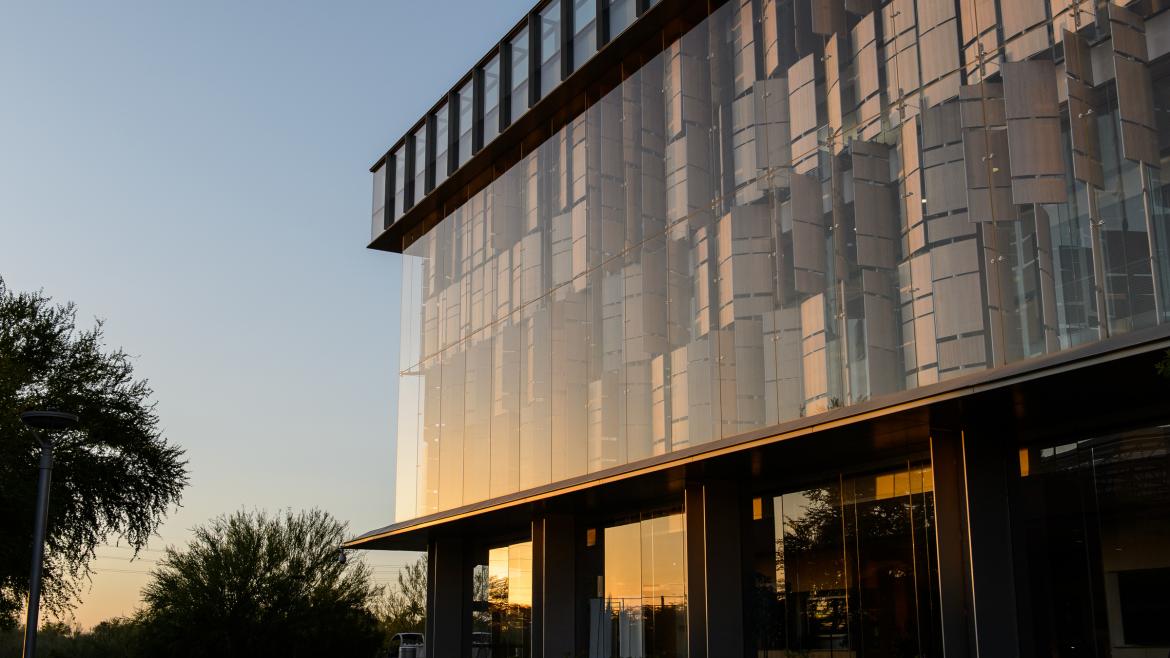 Arizona State University has been named to Kiplinger’s Personal Finance’s list of the top "best college values" of 2016.

According to the magazine, ASU is one of the top 100 best values in public higher education for in-state and out-of-state students, as measured by academic quality, freshmen retention and persistence rates, and affordability.

“We start with a universe of 1,200 schools, so each school on our rankings, from number 1 to number 300, is a best value,” said Janet Bodnar, editor of Kiplinger’s Personal Finance magazine.

Kiplinger’s rewards colleges who help students obtain degrees on time and within budget.

Through student retention programs such as eAdvisor, a unique system that guides and supports students in finding a major that fits his or her talents, and ASU’s unique Major Maps step-by-step roadmap tailored to each degree program to keep students on track, ASU has achieved increased retention and graduation rates.

ASU, the New American University, has opened its doors to all who are qualified while maintaining affordability and raising the quality of programs. ASU’s innovative faculty and high-caliber students from around the world have created an environment where inclusion prepares students for a globally connected world and the process of discovery is not bound by traditional academic disciplines.

This recognition is the most recent for ASU, which has also been lauded as the Most Innovative School by the U.S. News and World Report and the No. 4 public university chosen by international students, as reported by the Institute of International Education.