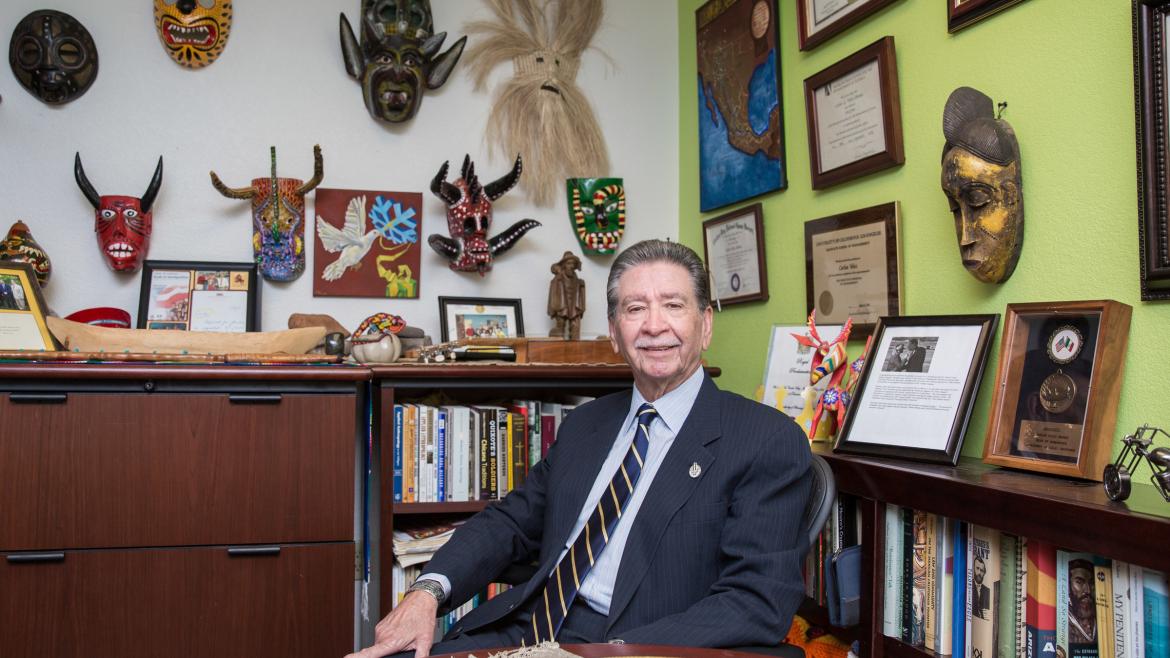 Getting to the heart of the human condition

They’re questions that carry a lot of weight and whose answers he asserts have “enormous implications” for understanding and appreciating humanity, with all its mysteries and nuances.

So for the better part of four decades, the Arizona State University Regents’ ProfessorCarlos Velez-Ibanez serves as a Regents' Professor in the School of Transborder Studies as well as the School of Human Evolution and Social Change, both academic units of ASU’s College of Liberal Arts and Sciences. Velez-Ibanez is also a Presidential Motorola Professor of Neighborhood Revitalization. has made it his mission to uncover those answers, conducting interdisciplinary anthropological research on subjects such as migration, economic stratification and political ecology in the U.S.-Mexico border region of what he calls “Southwest North America.”

Now, his years of passionate inquiry are being recognized by the Mexican Academy of Sciences, which has named him a corresponding member. A high distinction in itself, the recognition is all the more prestigious for Velez-Ibanez, a Tucson native and the first American anthropologist to receive it — and it came as quite the surprise.

“[My colleagues] had been asking me for material and I didn’t know what it was for until I got the notification. I thought they were putting a research project together or some kind of invitation to give a lecture,” he said.

As it turned out, the four colleagues who had been requesting scholarly material from him were using it to nominate him to the academy. They include: Mariangela Rodriguez, researcher and professor at the Centro de Estudios Superiores en Antropologia (CIESAS)The Center for Research and Studies in Social Anthropology; Rodolfo Stavenhagen, one of Mexico’s premier sociologists; Tonatiuh Guillen Lopez, director of Colegio de la Frontera Norte (COLEF)The College of the Northern Border; and Jose Manuel Valenzeula Arce, academic provost for COLEF.

All four of Velez-Ibanez’s nominators are also prominent members of the Mexican Academy of Sciences, a civil organization comprising more than 1,800 distinguished Mexican scientists from various institutions in the country, as well as a number of foreign colleagues, including various Nobel Prize winners — “which ain’t bad company,” Velez-Ibanez notes with a smile. 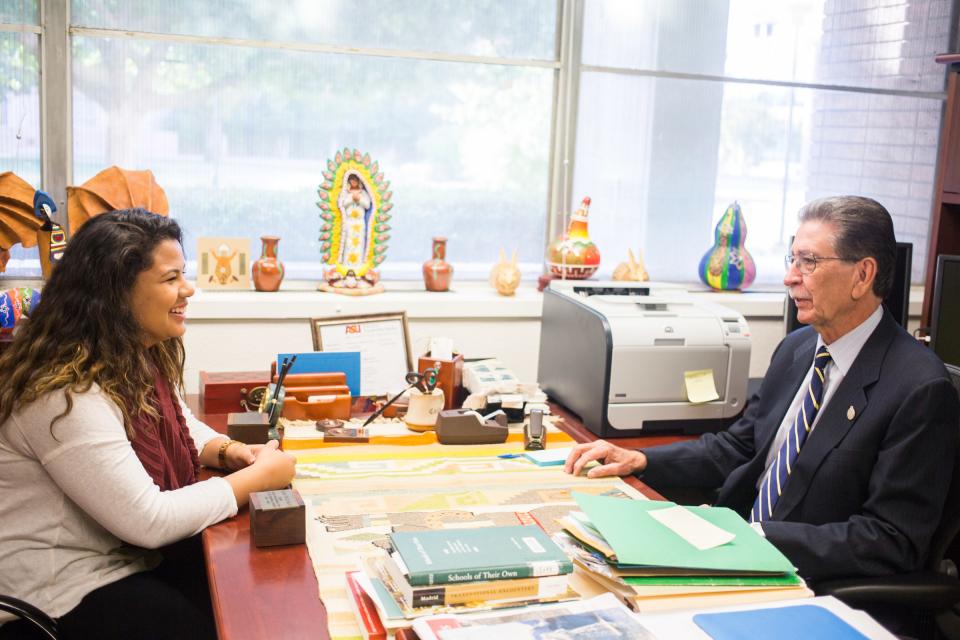 Carlos Velez-Ibanez speaks with a student, freshman business law major Aline Francisco Lewis, in his office at the School for Transborder Studies. Velez-Ibanez was recently named to the Mexican Academy of Sciences, making him the first American anthropologist to do so. Photos by Deanna Dent/ASU Now

The organization, which includes exact and natural sciences as well as the social sciences and humanities, is committed to disseminating the knowledge and values of science, fostering improvements in the quality of education and raising the profile of science in the various spheres of Mexican national life.

In her letter of nomination, Rodriguez described how Velez-Ibanez “has addressed issues that are … nothing more than the will to live, to succeed and to succeed in the midst of the most profound ecological, economic, political and cultural hardships. He has observed in a fine and profound way the cultural resources and financial strategies with which study subjects have faced the precariousness of their world … [and] has contributed in an outstanding manner to the formation of human resources for Mexicans both from [Mexico] and [the United States].”

She ended the letter, “The sole idea of his entrance to the Mexican Academy of Sciences appears to me to be an act of wisdom.”

The contributions referenced by Rodriguez include the publication of several books — four of which are based on original field research — including the forthcoming “Visiones de Acá y de Allá: Implicaciones de la Política Antimigrante en las Comunidades de Origen Mexicano en Estados Unidos y México” ("Visions of Here and There: Implications of the Anti-immigrant Policy in the Communities of Mexican Origin in the United States and Mexico"), on which she had “the enormous privilege of working with him.”

A longtime proponent of the importance of interdisciplinarity in the sciences, Velez-Ibanez is pleased to count himself among the small but growing handful of social-science experts in the academy.

“The problem has been that we have so over-professionalized both, and have acquired such unclear language for each. One, too many times posing as the only way in which to conduct research. The other one using language that at times is so obfuscating that it revels in its verbiage. And so, instead of moving toward clarity — which is what the scientific enterprise and the humanities enterprise is about — many times we obfuscate each other’s objectives and goals.

“Each provides us insights into the universal condition, and so shouldn’t be obfuscated by differences in language. Rather, we should try to bridge between those, because each provides invaluable knowledge to our human condition. It’s just that simple.” 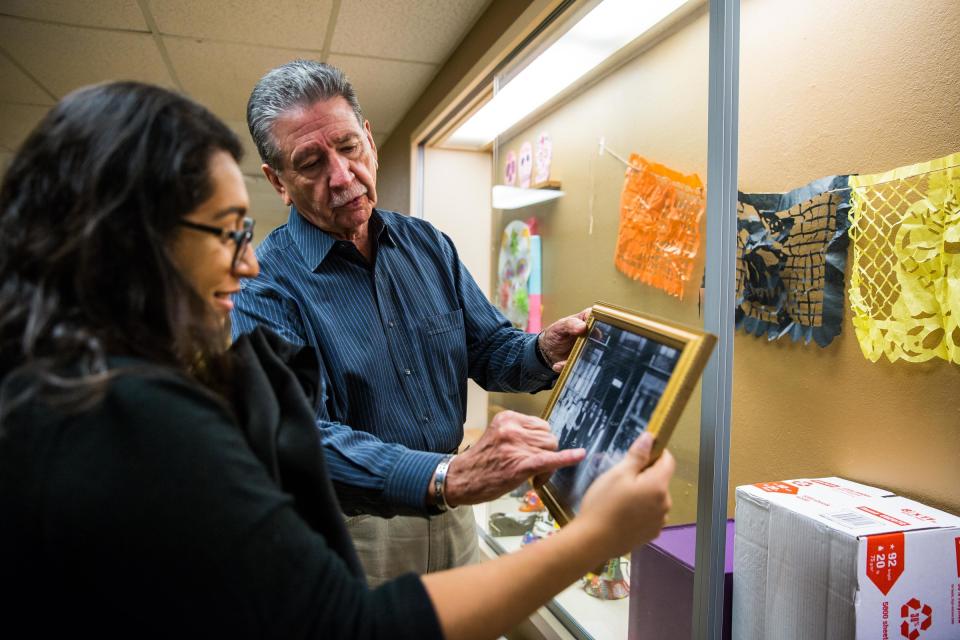 Carlos Velez-Ibanez shows business entrepreneurship sophomore Briana Juarez a photograph of his father from 1916 before placing it in the Day of the Dead altar at the School of Transborder Studies on Oct. 29.

Happily, Velez-Ibanez can point to the many departments and institutions at ASU, his own School of Transborder Studies among them, that strive to do just that.

In regards to this newest distinction, he is honored but says he doesn’t expect it to affect his work, and for good reason:

“All human beings have punctuating points … I regard this as a punctuating event for me. It’s very important for me personally … [but] it doesn’t change anything at all.

“All of these things, these kind of professional punctuating points are fine, well and good, but that’s not why you do it. That stuff comes as the aftermath of whether what you do is of any value or not. It’s not the other way around; you’re not doing it for that. If you’re doing it for that, the work will suffer from your own silly ego. You just want to make a little bit of a difference. And if you can make a little bit of a difference, whether it’s in your teaching, or it’s your research, or whether it’s in some kind of public effort having to do with what you know, that’s what makes it worthwhile.” 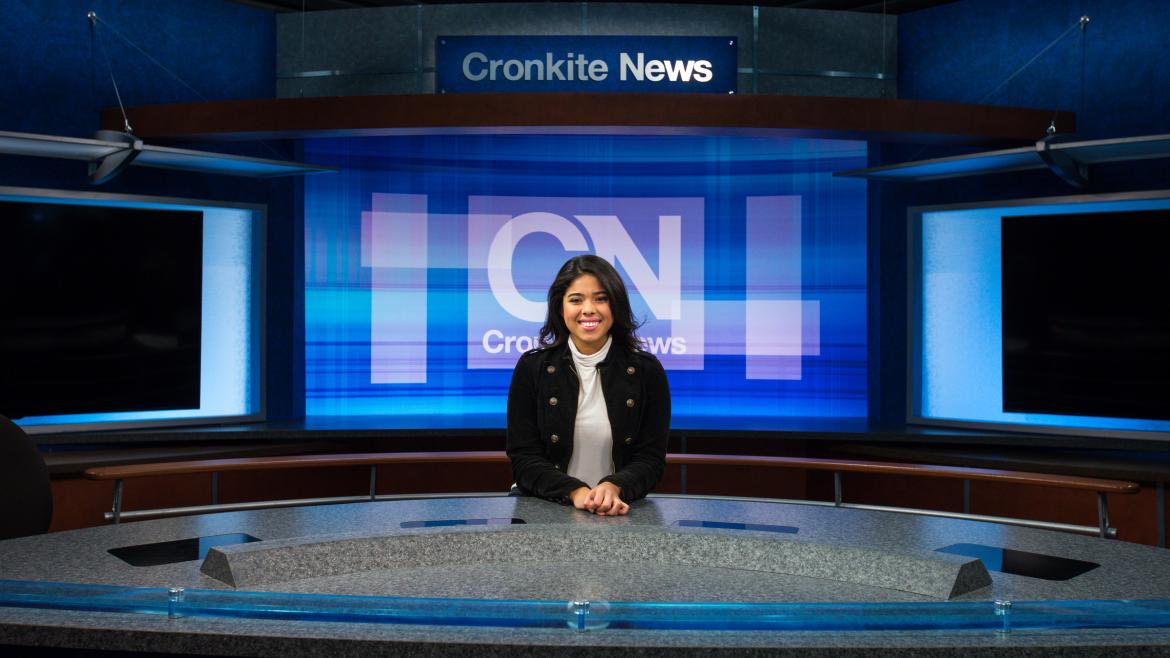 Downtown Phoenix campus
Graduating with a resume that looks like it belongs to a veteran journalist.
"She wants to contribute to society, and she will": ASU grad ready to do good.
December 16, 2015

Which is why, at age 22, her resume already reads like that of a veteran journalist.

For three semesters, Jacquez was a reporter for Cronkite News, the school's award-winning nightly newscast that reaches 1.9 million households on Eight, Arizona PBS. To top it off, this past summer Jacquez worked at Reuters in New York as an editorial intern, covering business and international stories for the global news agency — a credit she gives to her mentor Andrew LeckeyLeckey is a professor in the Walter Cronkite School of Journalism, a Donald W. Reynolds Endowed Chair in Business Journalism and President of the Reynolds National Center for Business Journalism..

“People try to give me credit for their successes; I’m like the guy who wiped the window from the car in the Indy 500. It’s all Yahaira,” Leckey said. “What she brings are the good traits of a journalist: curiosity and enthusiasm. The only reason why you wouldn’t hire her is because you just didn’t like her, but her positive personality, her nature, is infectious. That’s who you want in the newsroom with you.”

Jacquez said her good nature comes from her family. She’s a first-generation college student; her parents immigrated from Cuauhtémoc, Chihuahua, México, and came here to raise their kids with big goals, and bigger dreams. Jacquez knew she could always rely on her family, especially during challenging times.

She recalled a time when she took a difficult videography class. She called home to her parents crying and struggling to get through. In the end, however, Jacquez would not be deterred, partially in thanks to her mother.

Magda Ochoa always wanted the best for her daughter and knew she would succeed.

“I told her to continue forward; these lessons are only something to overcome because it’s preparing you for the future,” Ochoa said.  “But Yahaira has the will, that hunger to do better. She wants to contribute to society, and she will.” Cronkite graduate Yahaira Jacquez worked for three semesters for Cronkite News as an investigative reporter as well as a general-assignment reporter, covering a variety of issues including immigration, education and health. She also worked as a business reporter for the Reynolds Business Bureau and contributed to Cronkite News en Español. Photos by Charlie Leight/ASU Now

Still, even with her accomplishments and support, Jacquez remains humble, giving credit to the school she attends.

“Well, I have been taught through practice. It’s a big thank-you to Cronkite, who tells us to go out there and tell stories. Get experience,” Jacquez said. “We’re given roots here, to learn how to do things, but we’re also given wings. If you want to do it, you’re given the opportunity to do it."

Jacquez came to college understanding that the Cronkite School provides opportunity to the people who grab it — and she capitalized.

“There’s amazing people who go to this school, and they inspired me," she said. “It pushed me. I wanted to work on my craft. I wanted to improve. You have people who represent the school’s reputation. I wanted to be one of those people.”

She is now one of those people, and she’s passing the torch to future generations. Jacquez worked as a mentor for high school students last summer helping them transition into college. Four of those students are now attending the Cronkite School seeking her advice.

“Somebody did it for me. So I wanted to pave the way for the students who have that inclination,” Jacquez said. “If you have that feeling, then it should be fostered. That feeling is for a reason.”

For now Jacquez continues to look ahead, keeping her dreams simple and straightforward.

“I just hope to get my foot in the door with a place that allows me to develop my skills and become the journalist I want to be."