The National Center on Disability and Journalism (NCDJ) at Arizona State University has released a one-of-a-kind style guide for journalists and professionals who report or write about people living with disabilities.

The guide offers information and advice on nearly 70 commonly used words or terms — from “able-bodied” to “confined to a wheelchair.” It is being released to coincide with the United Nations’ International Day of Persons with Disabilities on Thursday, Dec. 3. The day of observance aims to promote an understanding of disability issues and mobilize support for the dignity, rights and well-being of persons with disabilities. 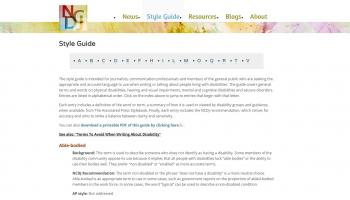 The National Center on Disability and Journalism at ASU has released a style guide for journalists and professionals who report or write about people living with disabilities. Download Full Image

Headquartered at ASU’s Walter Cronkite School of Journalism and Mass Communication, the NCDJ is a national organization that provides support and guidance to journalists and communicators as they cover people with disabilities.

The new style guide greatly expands on one developed by the NCDJ in 2010, said Kristin Gilger, the center’s director and associate dean of the Cronkite School.

“The language of disability keeps changing, and there are so many different opinions about what words and phrases should be used that there’s a real need for an authoritative, neutral source of guidance and information,” she said.

Gilger said disability can be a difficult topic to cover for journalists, many of whom are unfamiliar with current debates over language choices and what might be considered offensive. For example, many in the disability community object to the use of disabled as an adjective. They prefer “a person with a disability” as opposed to “a disabled person.”

“That distinction may seem subtle until you understand that people naturally want to be people first,” Gilger said. “Being disabled is only part of their identity.”

The style guide strives to balance the need for sensitivity and accuracy against the journalistic mandate for language that is clear and easily understood by a general audience, Gilger said.

In addition to offering recommendations on language choices, the guide provides a brief background on each word or term and touches on instances in which disability organizations disagree on usage. It also notes whether the word or term is addressed in the Associated Press Stylebook, widely used by journalists around the world as a guide to writing. Two-thirds of the entries in the NCDJ guide are not covered in the AP Stylebook.

Along with the guide, the NCDJ also has created a companion piece, “Terms to Avoid When Writing About Disability.” The article offers advice to communicators on why they should avoid using terms such as “epileptic fit” or “senile” and directs them to more neutral language.

Tim McGuire, Cronkite’s Frank Russell Chair for the Business of Journalism who is the author of a memoir on living with a physical disability and raising a child with Down syndrome, said he thinks the guide is incredibly valuable for journalists and writers.

“Nobody else can provide this same kind of comprehensiveness on disability language,” said McGuire, who is the former longtime editor of the Minneapolis Star Tribune and serves as an NCDJ advisory board member.

The NCDJ was founded in 1998 in San Francisco as the Disability Media Project to raise awareness of how the news media cover people with disabilities. The organization was renamed in 2000 and moved to the Cronkite School in 2009.

NCDJ’s disability style guide is available on the organization’s website or as a printable PDF.

In the first decade of his career, Bruce Springsteen sang about love, freedom and the loss of American values. But never once did the rock singer and songwriter espouse a political point of view.That all changed on Nov. 5, 1980 — the day after Ronald Reagan was elected the 40th president of the United States, and the same week Springsteen’s double album, “The River,” hit No. 1 on the Billb... 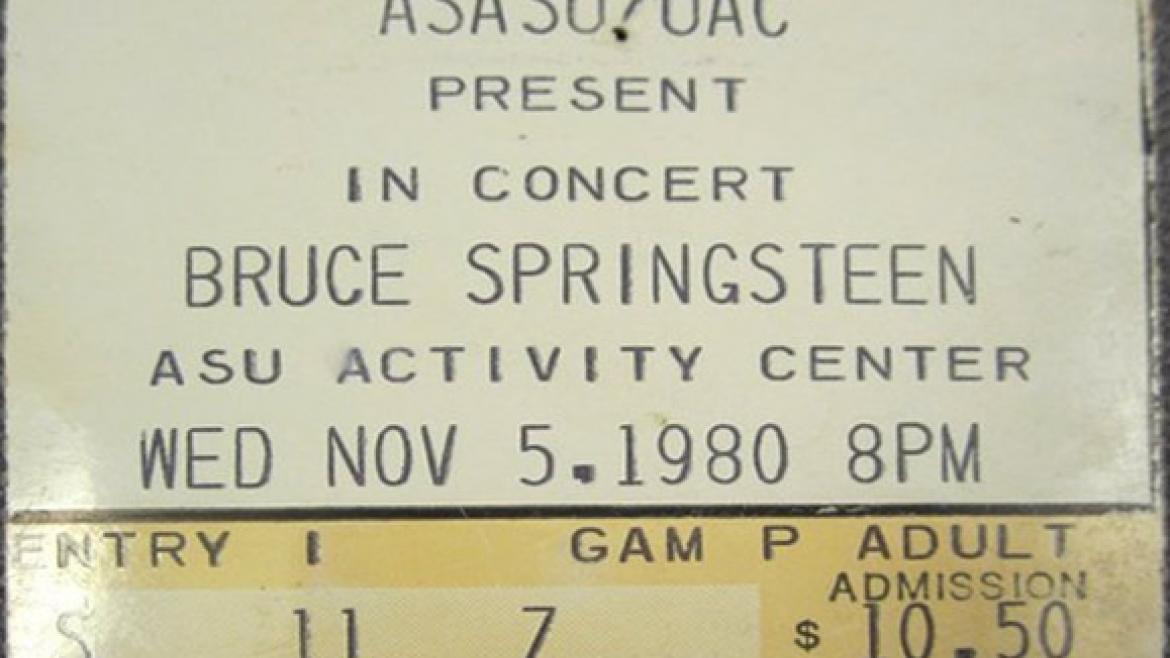 Tempe campus
The night The Boss got political, in front of a bunch of Sun Devils.
New box set showcases classic Springsteen moments at ASU.
December 3, 2015

In the first decade of his career, Bruce Springsteen sang about love, freedom and the loss of American values. But never once did the rock singer and songwriter espouse a political point of view.

That all changed on Nov. 5, 1980 — the day after Ronald Reagan was elected the 40th president of the United States, and the same week Springsteen’s double album, “The River,” hit No. 1 on the Billboard charts.

Long suspected to have Democratic sympathies, the New Jersey rocker often expressed his mixed bag of unrestricted individualism and crisis of the American spirit through his lyrics. However, he kept his political leanings to himself. But Reagan’s landslide victory over Jimmy Carter apparently confounded the singer, and the reactions bubbling inside him came out the next night during a concert at ASU’s Activity CenterThe ASU Activity Center is known today as Wells Fargo Arena..

“All you guys in the aisle find your seats, OK? There’s gonna be a real long show,” Springsteen said to a capacity crowd of about 10,700 people.

Naturally, the audience roared with applause and The Boss followed with his usual live gusto — including an inspired, rousing performance of “Two Hearts.” But it was what he said a few songs later that made this concert so memorable for many of his fans. 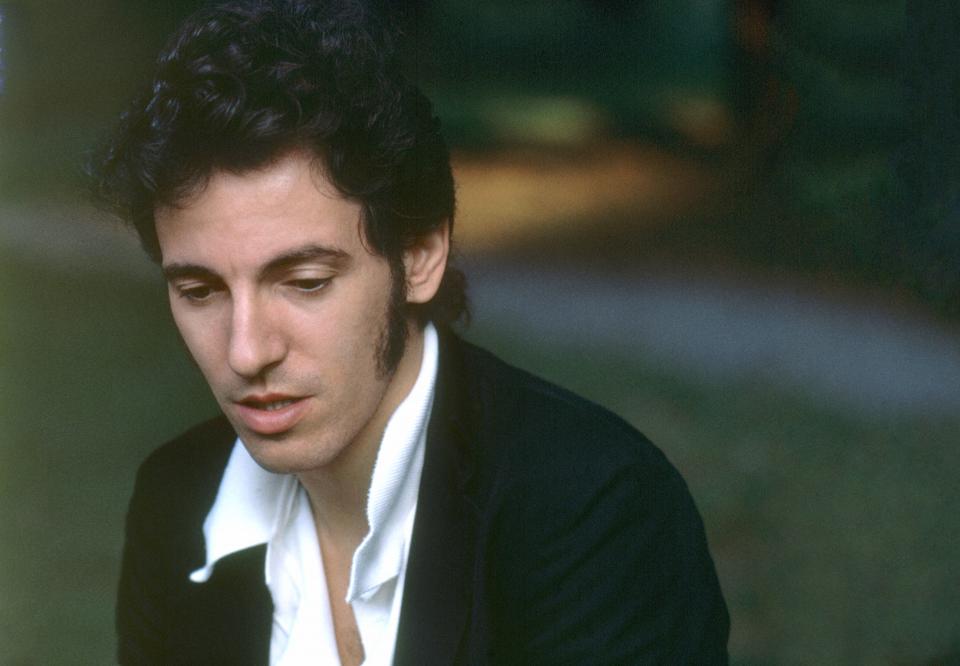 Bruce Springsteen, shown during the era of his 1980 concert at ASU. Courtesy photo.

As Springsteen and his famed E Street Band finished the title track to “The River,” he addressed the crowd as he had never done before.

“I don’t know what you guys think about what happened last night, but I think it’s pretty frightening. You guys are young — there’s gonna be a lot of people depending on you coming up, so this is for you.”

Again, the crowd erupted with applause. They were witness to Springsteen’s political coming-out party, and a concert that has become legendary among the musician’s fans and archivists.

Greil Marcus,the prominent music journalist and cultural critic, saw the Tempe concert as a game-changer. "The songs Springsteen will now be writing will have something to do with the events of Nov. 4,” Marcus wrote at the time. “Those songs will not likely comment on those events; they will, I think, reflect those moments back to us, fixing moods and telling stories that are, at present, out of reach.”

That famed night in Tempe, as well as hours of unreleased material, has been preserved for posterity in the new box set, “The Ties That Bind: The River Collection,” released on Dec. 4. The 4-CD and 3-DVD set includes the original “The River” double album; a CD of outtakes; a 60-minute documentary on the recording of “The River” and the long-awaited 1980 show in Tempe, widely regarded as one of his finest performances.

But what the box set won’t explain is how important this night was to Springsteen fans.

“He (Springsteen) was asking everyone what they thought of the night before, and (saying) how frightening it was to him. Then he did a very heavy and intense rendition of ‘Badlands’ right after that,” said Bill Consolo, a California resident who attended dozens of Springsteen shows throughout his career, including that night in Tempe.

“You could tell that Bruce wasn’t afraid or timid about voicing his feelings any longer. We all knew he was more than just some rocker.”

Thirty-five years later that night on the ASU campus is still a watershed moment for one of America’s most impactful artists. It set the stage for a career that saw Springsteen evolve into a musician who decried the way our nation ignored its war veterans (“Born in the U.S.A.”) and become a reflective voice of pride, regret and hope after the Sept. 11 attacks (“The Rising”).

When Springsteen’s career ends, he’ll be remembered for mesmerizing live shows and songs that wove palpable political and social commentary into rootsy hooks. But it wasn’t until that night in Tempe in front of a crowd of ASU students that he overtly shared those political beliefs on stage.

"Prove It All Night"

"Darkness on the Edge of Town"

"Out in the Street"

"Racing in the Street"

"I Wanna Marry You"

"The Ties That Bind"

"Wreck on the Highway"

"You Can Look (But You Better Not Touch)"