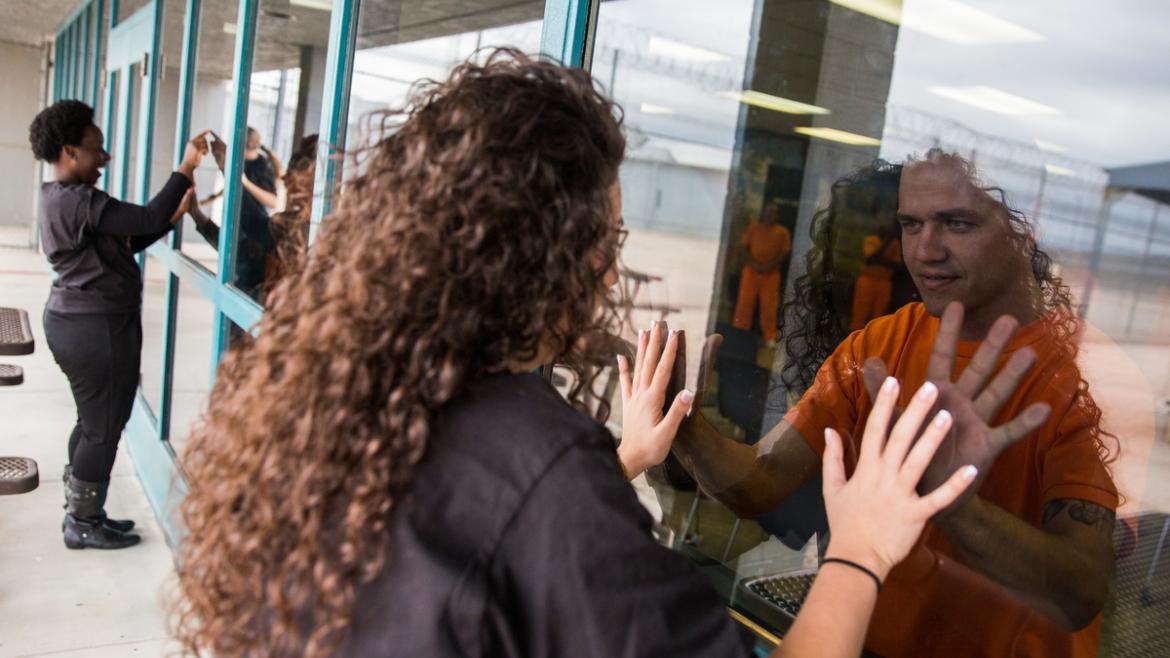 ASU takes its theater program into the prison system.
No first-show jitters as this stage show debuts in prison.
December 1, 2015

Rania Zeineddine peers through a wall of windows, watching the audience fill the seats in this makeshift theater.

She and her fellow actors start the show tapping on the glass to get the attention of her co-stars on the other side. One of them, Charles Thigpen, comes over and flattens his palms against the glass. She does the same before they start laughing and mimicking each other as if the window were a mirror.

This isn’t an avant-garde theater edict. This is a condition of staging a play inside the boundaries of Eyman State Prison.

Zeineddine is one of three Arizona State University undergrads who coordinated and crafted “Free Drama,” a 45-minute joint production between the students and Eyman inmates that stages the journal entries these prisoners and students exchanged during the course of a semester in the School of Film, Dance and Theatre’sThe School of Film, Dance and Theatre is part of ASU's Herberger Institute for Design and the Arts. Theatre Across Prison Walls class.

The doors finally open and the three students wearing ASU shirts walk inside, ready to join the prisoners wearing jumpsuits with “ADC” emblazoned on them.

There isn’t apprehension or fear. Rather, there are smiles and the joy coming from actors who get to perform their stories in front of an actual audience. 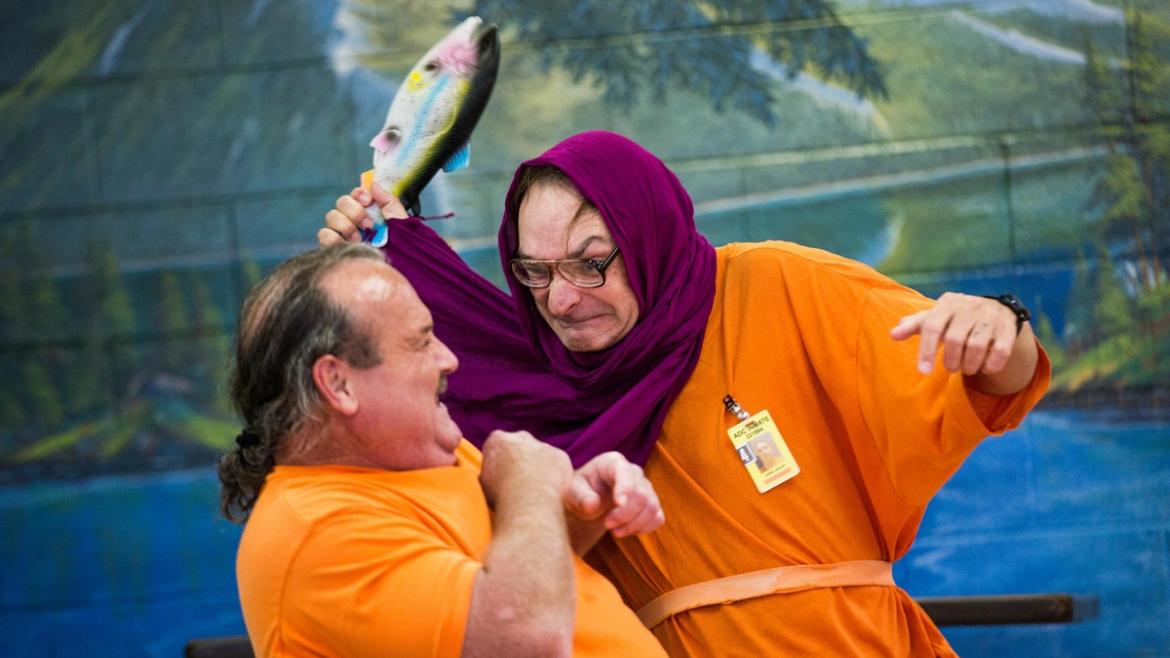 Rivka Rocchio has spent the past two years teaching drama to inmates inside Arizona’s Eyman Prison. But it wasn’t until this semester that the ASU graduate student decided to incorporate undergrads into the process.

She liked the idea of teaching a class that involved an exchange of ideas between her students in prison and her undergraduate drama students. The idea was approved, but there was one problem: The two sides wouldn’t be able to regularly meet to create a production. So Rocchio, who is using this project as part of her graduate thesis, improvised.

They settled on five themes: going home, joy or enjoyment inside of prison, emotions, animals, and stereotypes and layers. Each week Rocchio would ask the students to write journal entries relating to the prompts. After the entries were exchanged between classes, the students selected the pieces that best fulfilled the themes.

Rocchio then gave students in each classes prompts to delve into deeper stories that were developed into group scenes or monologues.

But the exercise become more intriguing when Rocchio decided to have the students and prisoners swap stories for the performance.

The results were varied ­— an inmate spoke about a first summer job interview at Starbucks, an ASU theater major performed a monologue documenting drug addiction and redemption through the Bible and religion.

“That really gave the students the opportunity to try on each others’ stories, to live in that identity for a little while and experience what it would be like, what it would feel like to say as a 23-year-old college student I’ve been a drug addict for 40 years and this is the impact that it’s had on my life,” Rocchio said.

Salome Chuma, an ASU theater major, was cast in an inmate’s tale of fighting with a doctor while his newborn child was in the NICU.

“That was the first time he had ever mentioned that story to anyone else, and he was like, ‘It was interesting that this is a story that’s personal to me and it’s in my memory and now it’s something that you have in your memory now. It’s weird that it’s living in two different people, and I’m seeing that lived out through you,’ ” Chuma said. “As actors you kind of never forget a monologue, or a show, so it’s now a part of you just how it’s a part of them too …  it’s crazy.”

Back in the Cook Unit of Eyman Prison, Chuma sits in a chair on “stage” during the performance in front of inmates and prison administrators.

Her hands are empty, but she relays a monologue about a letter inmate T.J. Garrison had written to his mom, who died during his time in prison. The dialogue explained his attempts to better himself and to better understand his mother’s motivations.

Garrison is soft-spoken and contemplative. His fingers are tattooed with letters that spell out “beauty.” He was convicted in 1997 at the age of 20 and wrote his journal entry on a day he simply “felt open,” which many Cook Unit inmates say is rare.

Afterward, he thanked Chuma for the performance. She thanked him for sharing his emotions and words.

“I didn’t think anything I could do could ever have that kind of effect on somebody, and that felt really powerful,” Chuma said.

Much of the show, which veered from poignant introspection to comedy, inspired the same sentiments between parties.

As the production closed, Rocchio gives thanks to the Arizona Department of Corrections, her graduate adviser and to her students before asking the entire group to paint a large white banner with their thoughts about the performance with markers or fingers. Inmate Garrison writes a large and colorful “Namaste” while B. Brewer, his tattoed hands covered in purple paint, makes hand stamp prints up and down the banner.

Rocchio said the moment this unique experience “clicked” for her students was during the hourlong car ride back to ASU from the prison in Florence. Her students related their initial apprehension and how it gave way to an understanding that drama became a shared experience to better understand another person they had seen as so different from themselves.

“That’s what I want you to get out of it,” Rocchio said. “You are people and these are people and you connect through the passions that you have for theater and art.”

Almost as soon as he’d been given a list of university presidents for consideration to give the keynote address at this year’s Science Foundation Arizona Erich Bloch Lecture and Dinner, William Harris received word from the namesake and technology magnate himself to disregard it.“[Erich] called me and said, ‘Throw that list away. The only person who should speak is Crow,’ ” said Harris...

Herberger Institute for Design and the Arts , School of Music, Dance and Theatre , Barrett, The Honors College , Theater

Tempe campus , School of Civic and Economic Thought and Leadership , The College of Liberal Arts and Sciences , Arts 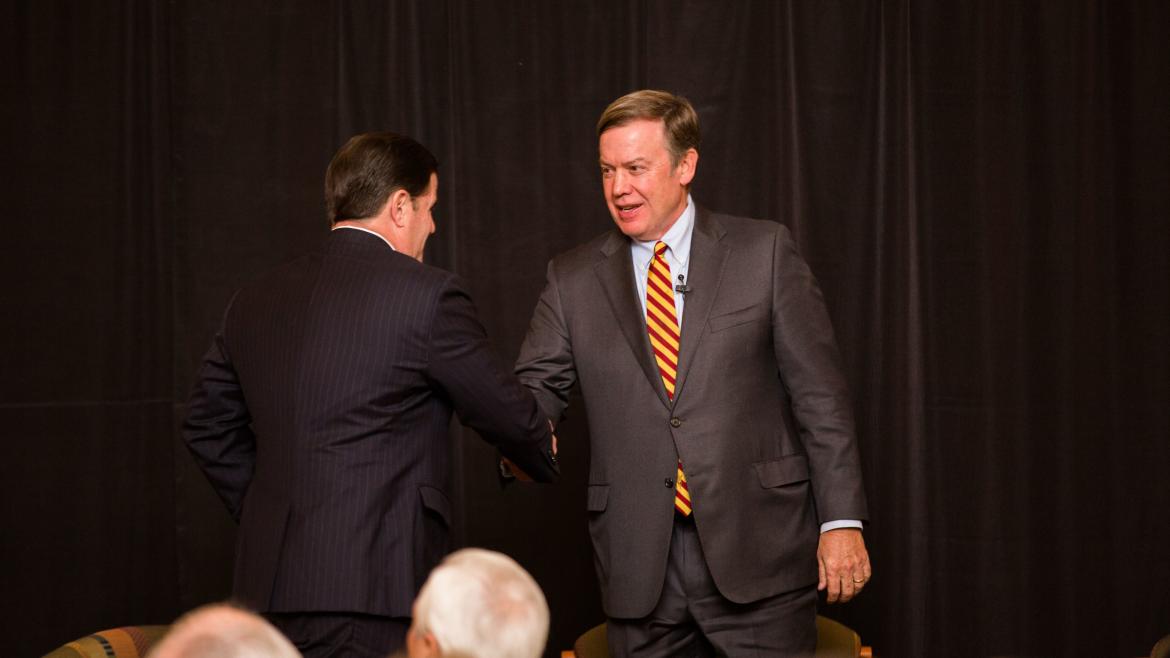 Almost as soon as he’d been given a list of university presidents for consideration to give the keynote address at this year’s Science Foundation Arizona Erich Bloch Lecture and Dinner, William Harris received word from the namesake and technology magnate himself to disregard it.

“[Erich] called me and said, ‘Throw that list away. The only person who should speak is Crow,’ ” said Harris, president and CEO of the foundation.

Bloch was referring to Arizona State University President Michael M. Crow (pictured above right), who has overseen the decade-plus transformation of the university into a model for the New American University — an institution committed to access, excellence and impact, where research and discovery of public value is a top priority.

“Michael Crow is a person who shares many of Erich’s attributes as a strategic thinker and visionary,” Harris said during his opening remarks at the second annual event, this year dubbed “Advancing the Building Blocks of a Modern High-Tech Economy,” which took place Tuesday night on ASU’s Tempe campus and included Arizona Gov. Doug Ducey among its attendees.

Both Science Foundation Arizona (SFAz) and former board member Bloch — creator of the IBM System/360, oft-considered one of the top technological accomplishments of all time — emphasize the increased potential for advancement when universities and industry work together. So after last year’s inaugural event featured a keynote address from industry leader John E. Kelly III, senior vice president for IBM, Bloch wanted this year’s speaker to come from the most innovative of the nation’s academic vanguard.

In a prerecorded video message played at the event, Bloch called Crow the “clear choice.” 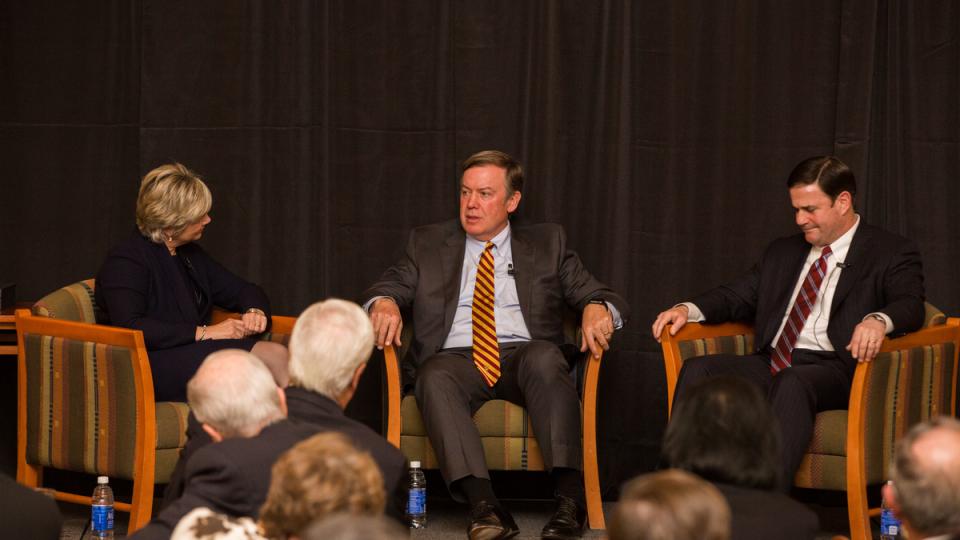 Both Crow and the university — recently recognized by U.S. News and World Report as the most innovative university in the country, ahead of Stanford and MIT — were honored at the event with an award from SFAz, a public-private partnership committed to making connections between the sciences, business and education in Arizona.

Since its establishment in 2006, SFAz has played a critical role in building and diversifying the future of the state’s economy by providing grants that accelerate the discovery of knowledge and reaching out to the community to inspire a love of science among local youth.

During his talk Tuesday night, Crow addressed the crowd on the importance of supporting STEM education, not only for the purpose of producing a skilled professional workforce, but because it fosters a society of individuals capable of the kind of critical thinking required to develop creative “moonshot” ideas for the future.

“There is nothing, no rhetoric that you should be listening to that says that we cannot [improve STEM education], and at ASU we’re working vigorously to make that happen,” he said. “We have a new culture, and the culture is that we’re here to be a world-class research institution that is wildly successful and wildly inclusive of all kinds of students.”

He then shared a brief overview of how ASU is working to meet this need through growing enrollment in STEM-related disciplines and STEM-related degrees awarded, highlighting the university’s engineering education efforts in particular.

Crow and Ducey spoke about the need for cross-sector responsibility and collaboration in order to create a better, more prosperous future for Arizona, with the governor remarking, “I believe in our state and this vision of opportunity for all. ... Education is a state responsibility. We have to work hard on it, and we’ll never check the box and say we’re done.”