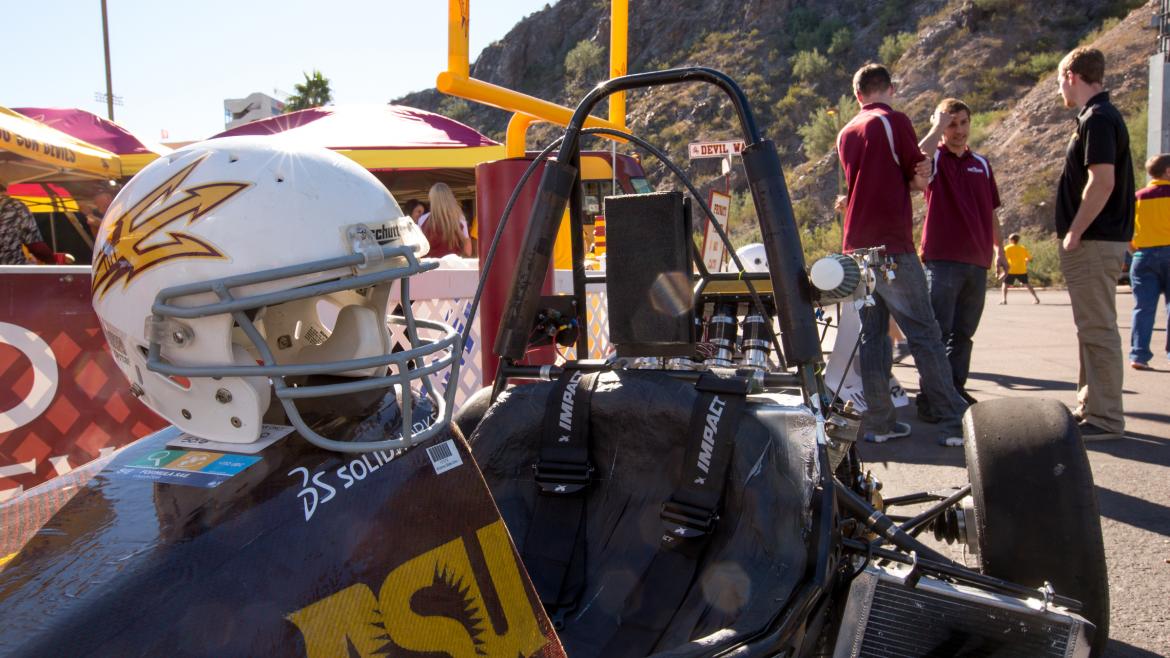 Editor’s note: This is the latest installation in a yearlong series about ASU's Formula SAEFormula SAE is a student design competition organized by the International Society of Automotive Engineers (now known as SAE International). team. Find links to previous stories at the end of this article.

It’s the Saturday of the Territorial Cup game. While a sea of students in gold T-shirts offering “No Pity for the Kitty” heads towards the stadium and hundreds of tailgate parties, the dedicated students of the Formula Society of Automotive Engineers are skipping Arizona State University’s most important day of the year to work on their race car.

“We’re not overfunded by any means,” said team manager Troy Buhr, a junior in mechanical engineering.

Buhr is in the stadium parking lot at an unbelievably elaborate tailgate party — capable of hosting more than 70 people — but he’s not hoisting a beer. Last year’s car sits beside a Formula SAE table with promotional materials. Buhr’s out to see if he can win interest and hopefully some money at the same time.

“We’re here at the tailgate to get our name out there,” he said. “At an event like this it’s going to be individuals.”

The tailgate was hosted by Ray Bilby, vice president of sales and marketing at Trafficade, Formula SAE’s latest sponsor. Trafficade is an Arizona traffic-safety company, specializing in things like pavement milling and asphalt repair. It’s appropriate they sponsor a race car, because a car is the vantage point from which most people watch their work.

“We’re still working hard on sponsorship,” Buhr said. “We’re covering our bills. ... We’re in a better place than we were, for sure.”

The club got a windfall recently when the university reimbursed them $4,000 in travel expenses from last summer’s trip to the national competition in Lincoln, Nebraska.

“If you try really hard, people tend to want to help you out,” Buhr said.

The student-led team is working toward the June Formula SAE competition in Lincoln. They had originally wanted to have the car built by January, so the majority of the spring semester could be spent on testing and improvements.

Building up to deadlines

Chief engineer Wes Kudela shuttled between the table at the stadium and the shop on campus where the car is being built. The build was going well, he said, but the nagging issue of money continued to be the biggest obstacle.

“The only thing we’re hurting on is lack of finances to buy stuff we need,” said Kudela, a senior in mechanical engineering. The 110-student-strong club has spent so much time getting last year’s car into shape for Homecoming and the Territorial Cup that Kudela reevaluated and updated deadlines. Team manager Troy Buhr, a junior in mechanical engineering, talks with an interested fan near the north entrance to Sun Devil Stadium on Nov. 21. The Formula SAE group, along with last year’s race car, tried to raise attention and funds for their project while football fans tailgate before the Territorial Cup. 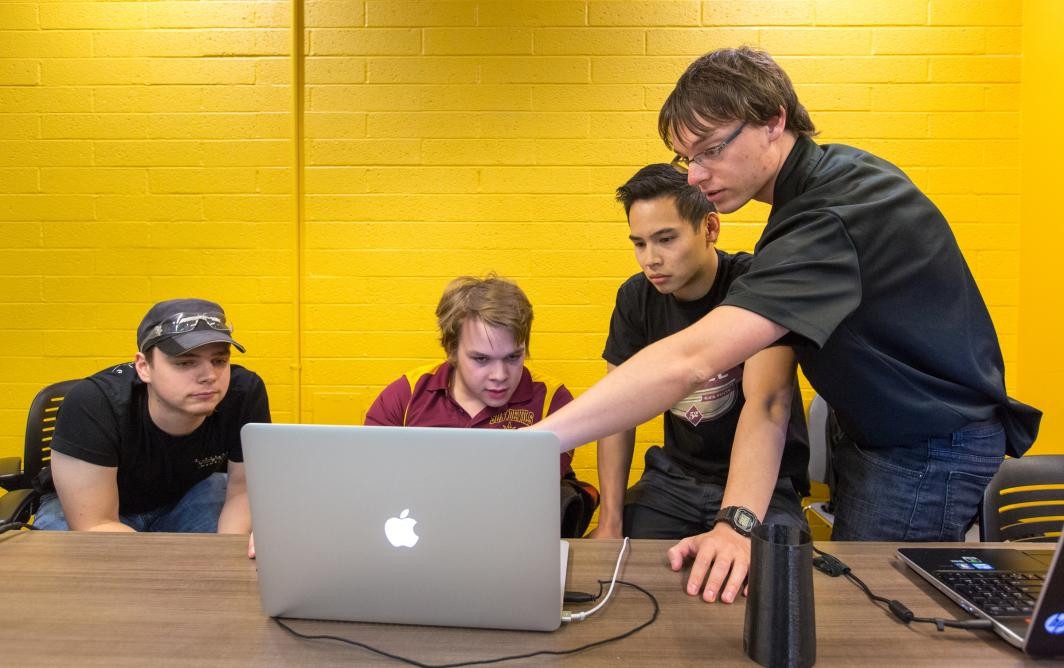 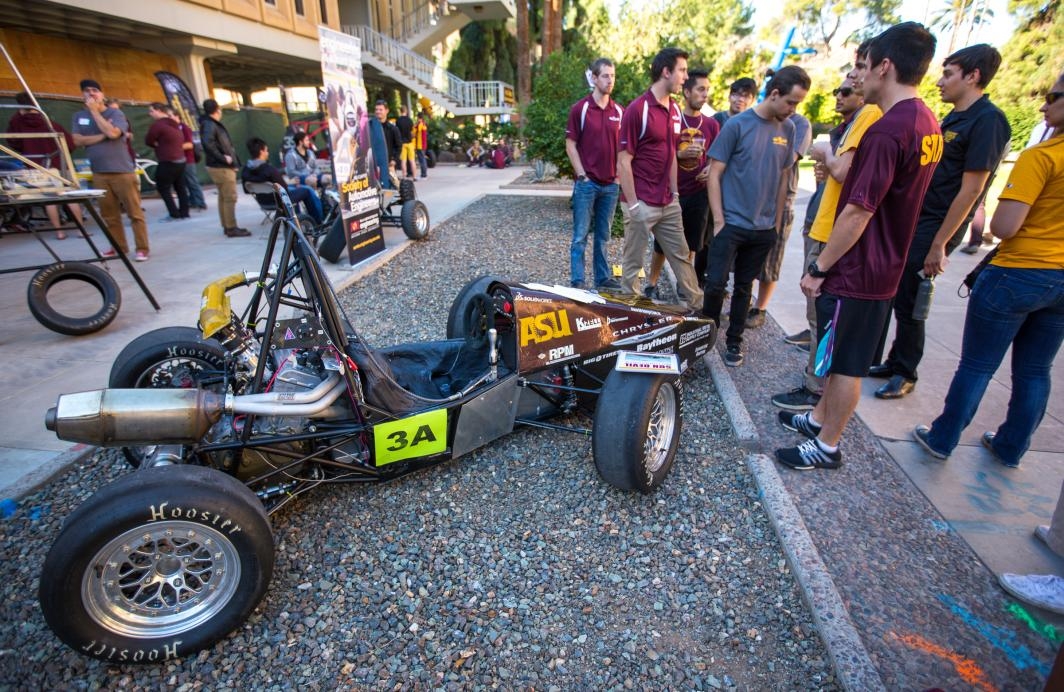 At the Homecoming Block Party on Nov. 14, members of ASU's Formula SAE team stand around last year's car, displayed outside the Engineering Center G building on Tyler Mall. The team drove this car in the parade and displayed the hand-built chassis of their current Formula One-style car. The team's hand-built chassis for this year's car is displayed during the Homecoming Block Party. The students hope to complete their car, from first-sketch design through building and testing, in time to compete with teams from other schools in Lincoln, Nebraska, in June. 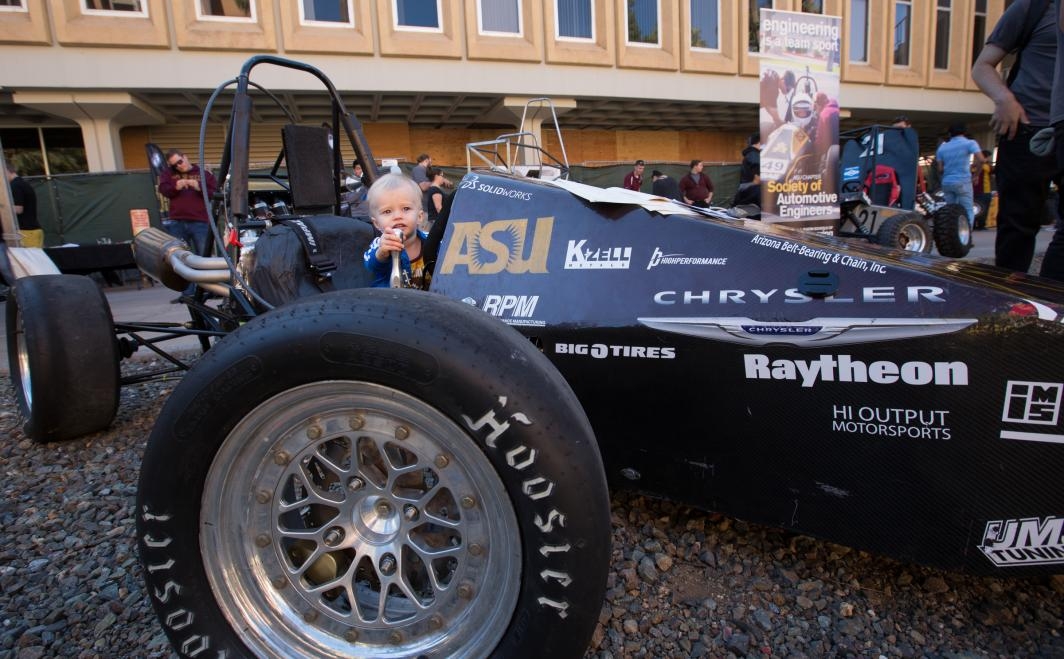 Freshmen are getting younger and younger: 21-month-old Connor Tetreault gets some seat time at the wheel of ASU's Formula SAE team from last year during the Homecoming Block Party on Nov. 14. Connor, the son of two ASU educators, seems ready to start his racing career early. “I gave everyone deadlines they need to meet to have a running car by January 2,” he said. “Everyone got a little pressure put on them, but I think that’s good. ... The main idea is that we are decently ahead of the curve with our chassis manufacturing. That’s encouraging, but that’s not something I want people to use as a comfort zone.”

The team will buy some parts to keep everyone busy in coming weeks.

“Once we buy those parts, it will give all the sub-team leads stuff to do on Saturdays,” Kudela said.

A lot of members plan to stay on campus to get work done over the holiday breaks. Kudela is going home for two weeks instead of four so he can focus on the car. “That will be awesome,” he said.

Though there were only 15 engineering students instead of the usual 60 or 70 in the shop on the weekend of the big game, they were busy measuring, fitting, cutting, sanding and deburring struts for the chassis.

All struts are important, but these vertical struts will carry the engine and most of the weight. Gaps between tubes need to be as tight as possible for strength. Ultimately a thicker weld makes for a weaker joint.

The project is divided into eight teams. Martin Morrow is the leader of the aerodynamics team.

“We’re in charge of the aero aspect of the car,” he said. On the Sun Devil Motorsports–16 (the car’s official name), that means the nose cone and radiator side pod. Normally a Formula car has wings the aero team would design and build, but they can’t afford wings this year.

The aero team makes 3-D models of their components in computer-aided design programs, then tests them with engineering software.

“Everyone got a little pressure put on them, but I think that’s good. ... The main idea is that we are decently ahead of the curve with our chassis manufacturing. That’s encouraging, but that’s not something I want people to use as a comfort zone.”

When they’ve settled on designs and printed out 3-D prototypes, they will put them in one of the two wind tunnels on the Tempe campus and “make sure the theoretical data matches the experimental data,” Morrow said.

As with the rest of the project, the aero team needs a carbon-fiber sponsor. What they have in mind is a triple-layered sandwich of material that won’t rip off the bolts when the car is flying around the track.

The nose cone may be a solid piece, or it may have a top that slides back so that brake lines and pedals can be accessed. “Ideally you wouldn’t need to get in there,” Morrow said. “Ideally.”

It’s the first time ASU’s Formula SAE team has had a dedicated aerodynamics team. They don’t have the historical data teams at other universities have. “There’s a learning curve,” Morrow said.

The toughest problem they have to crack will be designing and testing the radiator side pod. “How small can we make our inlet and still cool the engine at any speed?” Morrow characterized it.

Scott Gramke, a senior majoring in mechanical engineering, leads the drive team. His team’s responsibility covers “pretty much anything after the engine and before the wheels.”

They’re redesigning the differential, which aims engine power at the wheels and transmits power to the wheels while they’re turning at different speeds. The drive team faces an important decision. Do they use the differential from last year’s car, or can they buy an off-the-shelf differential costing $2,600 that they have spec’d out?

“The one we have would cost a couple of hundred dollars” to get test-ready, Gramke said. Their engineering goal is to reduce weight.

To support the ASU Formula SAE team, click here, then select the “write-in” circle in the “supporting” category and enter the following in the box: "ASU-Society of Automotive Engineers 30006731".

Look for the next installment Dec. 10.

ASU gives students a chance to give thanks

This time of year is traditionally a chance to give thanks while surrounded by friends and family. However, not all Arizona State University students are able to travel home for the holidays. Various campus organizations are working to bring ASU’s culturally diverse student body traditional and non-traditional Thanksgiving meals, as well as a homey atmosphere.Every year, the Off Campus Student ... ASU gives students a chance to give thanks

This time of year is traditionally a chance to give thanks while surrounded by friends and family. However, not all Arizona State University students are able to travel home for the holidays.

Every year, the Off Campus Student Services department partners with the Sun Devil Family Association to provide traditional Thanksgiving meals to in- and out-of-state and international students — as well as their family and friends.

Their Thanksgiving Dinner has been bringing holiday traditions to students since 2007. More than 50 participants attended the first year. Since then the number of students, family and friends has increased to 363. This year, the department hopes to serve 500 attendees, according to Maureen Duane, ASU Family Resources program coordinator senior.

This year's Thanksgiving dinner will take place from 11 a.m. to 1 p.m. Thursday, at the Off-Campus Student Services Building on the Tempe campus. The dinner is free; a canned-food donation is requested for the City of Tempe Food Bank. An RSVP is required; find more information here.

The November holiday is typically celebrated in the Unites States and Canada (which has its own version of the holiday), but ASU is home to thousands of international students who may be unfamiliar with the holiday or do not celebrate it. Those students are given an opportunity to come together and give thanks during the annual Gratitude Dinner.

This is the second year that the Graduate and Professional Student Association (GPSA) is hosting the Gratitude Dinner. Last year approximately 100 graduate students attended the potluck dinner, and GPSA President Pauline Venieris anticipates that the number will increase this year.

“This is a time to be around the community that you are a part of and a time to be grateful for where you are,” Venieris said. “Many of the students who come are international students, and they express how grateful they were for a place during for them to be during this time.”

Venieris explained that students are able to get a taste of home while experiencing cuisines from all over the world. Those who have attended in the past brought dishes like handmade dumplings, freshly rolled sushi, various curries and baklava to the potluck for their fellow classmates to try.

This year’s Gratitude Dinner will be held at 6 p.m. Wednesday, Nov. 25, at the Graduate Student Center in the Center for Family Studies building on the Tempe campus.

“Many of the students who come are international students, and they express how grateful they were for a place during for them to be during this time.”
— GPSA President Pauline Venieris

Chun Tao, director of International Student Concerns for GPSA, has been planning the Gratitude Dinner for a few weeks now. She says that even though all students do not celebrate Thanksgiving, this event caters to a diverse group of people, giving them a way to come together and express gratitude.

Tao and a group of students from GPSA have been working to set up activities for students at the dinner — from writing letters to their families thousands of miles away to writing down what they are grateful for:

“Taking time to reflect on things you are grateful for can contribute to your happiness,” Tao said.