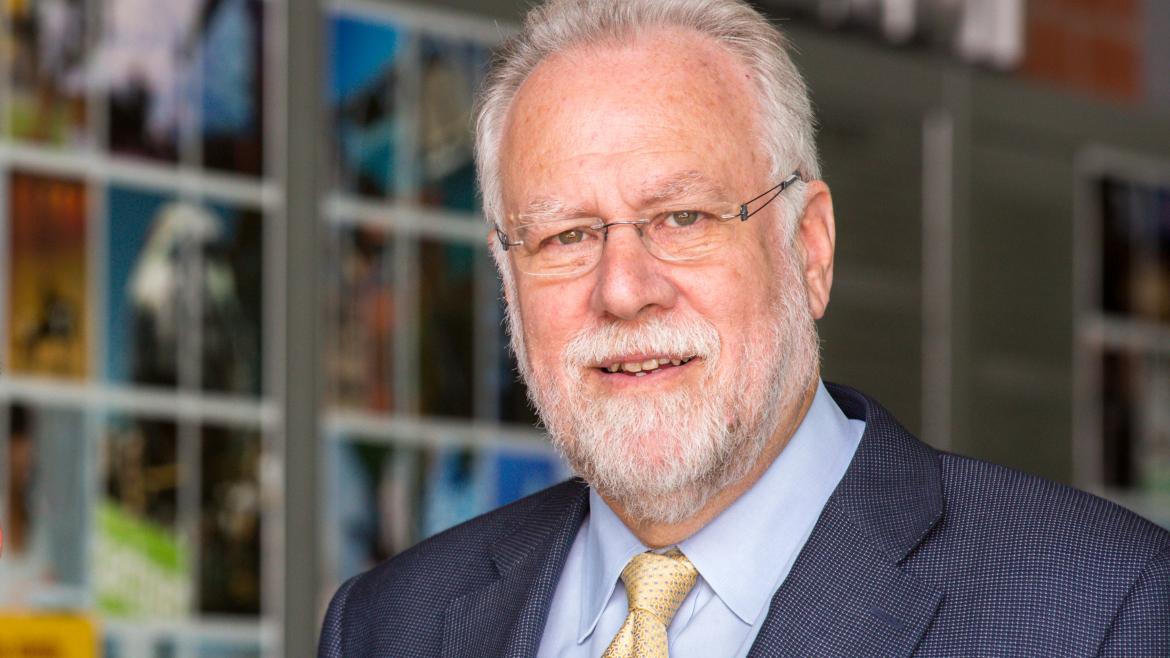 Mark Searle has been named provost of Arizona State University.
New ASU provost served as dean of West campus and VP for academic personnel.
ASU's provost also a prof. in the School of Community Resources and Development.
November 20, 2015

Searle, currently the interim provost, has been at ASU since 1995

ASU President Michael Crow promoted Searle to the post, which Searle has held in an interim capacity since June, and charged him with mapping out a three-year plan to raise student retention and graduation rates, increase tenure track faculty and increase access to higher education for qualified students. The Arizona Board of Regents approved Searle’s appointment today.

“Mark has served ASU with distinction for decades in increasingly complex roles,” said ASU President Michael M. Crow. “His experience, skill, commitment to a modernized and innovative ASU and work ethic have proven to be invaluable to ASU and all that the institution is achieving. In addition he is well regarded by faculty, students and leaders throughout and around the institution.”

While ASU already has increased access for qualified students, the success of the state and the country depends in large part on finding ways to provide more students with the opportunity to seek a quality higher education, Searle said.

“There is tremendous need in Arizona,” he said. “There are many more thousands of students graduating from high school in Arizona capable of going to college than are going to college. We need to get those students going to universities, and we need them to go to Arizona State.”

Those students need to learn from both the teaching and research faculty, requiring the university to increase the number and diversity of tenured and tenure track faculty.

“We need them to advance the intellectual product,” Searle said. “We need to have more research done, because we have opportunities and demand for the expansion of knowledge and discovery of knowledge.”

Searle said ASU must raise its student retention rate, the percentage of students who return for the next year of school. And while it’s graduation rate has more than doubled over the past two decades, the goal is to see 75 to 80 percent graduating by the year 2020

Searle arrived at ASU in 1995, when West Campus was in its nascent stages of development, and the vacated Williams Air Force Base only recently had been turned over to ASU, later to grow into the Poly Campus. ASU had only recently climbed into the first tier of research institutions.

Since then, enrollment has doubled and the university’s research enterprise has grown from around $100 million to nearly $450 million

Searle advanced through the ranks at ASU since joining the university as founding dean of the College of Human Services. He served as a faculty member and as provost of West campus, vice provost for academic affairs, vice president for academic personnel and deputy provost and chief of staff to the provost.

He held a series of academic leadership positions with increasing responsibility at the University of Manitoba before moving to ASU.

Searle has served many organizations and governments in a variety of capacities over his career.  He has edited one journal, served as associate editor of four others, reviewed for national granting agencies, and served his local community through leadership roles on various boards of directors.

ASU will conduct a national search to fill the role of deputy provost and vice president for academic affairs.

When he started at ASU and would travel to academic conferences, his employer’s name drew limited attention, Searle said. Now other attendees are keen to learn more about ASU.

“They want to understand all the change, the experimentation, the speed of success — all of that coupled with an environment that’s producing research at a rate that’s phenomenal,” Searle said. “We can do things that most people don’t think they can do.”

Earth's oxygen-rich atmosphere emerged as transient “whiffs” in shallow oceans around 2.5 billion years ago, according to new research from Canadian and U.S. scientists.These whiffs of oxygen likely happened in the following 100 million years, changing the levels of oxygen in Earth’s atmosphere until enough accumulated to create a permanently oxygenated atmosphere around 2.4 billion years ag...

Earth's oxygen-rich atmosphere emerged as transient “whiffs” in shallow oceans around 2.5 billion years ago, according to new research from Canadian and U.S. scientists.

These whiffs of oxygen likely happened in the following 100 million years, changing the levels of oxygen in Earth’s atmosphere until enough accumulated to create a permanently oxygenated atmosphere around 2.4 billion years ago — a transition widely known as the Great Oxidation Event. Analysis of selected bands of the late Archean Mt. McRae Shale found in the upper 200 meters of the ABDP-9 core provide evidence of oxygen in Earth's atmosphere 50 million-100 million years earlier than previously known. The project, financially supported by NASA and NSF, brought researchers together from five universities, including Arizona State University, where the core samples used for research are housed. Also pictured is a vial of processed — pummeled — rock powder used for geochemical analysis. Photo by Tim Trumble/ASU Download Full Image

“One of the questions we ask is: ‘Did the evolution of photosynthesis lead directly to an oxygen-rich atmosphere? Or did the transition to today's world happen in fits and starts?" said Ariel Anbar, President’s Professor in Arizona State University’s School of Earth and Space Exploration and the School of Molecular Sciences. “How and why Earth developed an oxygenated atmosphere is one of the most profound puzzles in understanding the history of our planet.”

The findings are presented in a paper published this month in Science Advances from researchers at the University of Waterloo, University of Alberta, Arizona State University, University of California Riverside, and Georgia Institute of Technology. The team presents new isotopic data showing that a burst of oxygen production by photosynthetic cyanobacteria temporarily increased oxygen concentrations in Earth's atmosphere.

“The onset of Earth's surface oxygenation was likely a complex process characterized by multiple whiffs of oxygen until a tipping point was crossed,” said Brian Kendall, a professor of Earth and Environmental Sciences at the University of Waterloo, who led the study. “Until now, we haven’t been able to tell whether oxygen concentrations 2.5 billion years ago were stable or not. These new data provide a much more conclusive answer to that question.”

Kendall was a visiting student, postdoctoral fellow and faculty research associate at Arizona State University from 2006-2012, where he worked with Anbar.

The new data support a hypothesis proposed by Anbar, Kendall, and other collaborators in 2007. In Western Australia, they found preliminary evidence of these oxygen whiffs in black shales deposited on the seafloor of an ancient ocean.

The black shales contained high concentrations of the elements molybdenum and rhenium, long before the Great Oxidation Event.

These elements are found in land-based sulfide minerals, which are particularly sensitive to the presence of atmospheric oxygen. Once these minerals react with oxygen, the molybdenum and rhenium are released into rivers and eventually end up deposited on the seafloor.

In the new paper, the researchers analyzed the same black shales for the relative abundance of an additional element: osmium. Like molybdenum and rhenium, osmium is also present in continental sulfide minerals. The ratio of two osmium isotopes — 187-Os to 188-Os — can tell us if the source of osmium was continental sulfide minerals or underwater volcanoes in the deep ocean.

"The osmium isotope evidence for increased continental sources directly correlated with higher molybdenum and rhenium concentrations in the shale," said professor Robert Creaser of the University of Alberta, a coauthor of the study whose lab carried out the new analyses. "By comparison, black shales with lower molybdenum and rhenium concentrations had osmium isotope evidence for less continental input. These correlated changes are best explained as reflecting changes in the O2 content of the atmosphere."

The paper’s authors also include professor Timothy Lyons from the University of California Riverside and professor Chris Reinhard from the Georgia Institute of Technology.