It’s a tricky question, because there isn’t a definite answer. Sports stars come in all shapes and sizes — from a 5-foot-8, 141-pound soccer player to a 6-foot-4, 265-pound NFL tight end.

Just look at the athletes who come together every Tuesday night in ASU’s Memorial Union bowling lanes. They’re a mix of body types, ages and abilities. But they’re all athletes if you measure by a different metric: the desire to compete and better themselves through sport.

The team was formed last month when ASU’s Student Athletic Association (SAA) paired up with the Gilbert Roadrunners of Special Olympics Arizona to create a unified bowling squad made up of some of Arizona’s best Special Olympic athletes and some of the Pac-12’s finest competitors.

The partnership began when junior women’s soccer defender Annie Warren was elected president of the SAA this year. Warren, who has a brother with autism and is an active Special Olympics volunteer, began looking for ways to merge Special Olympians with ASU collegiate athletics. Special Olympian Sofija Obradovic of Chandler
instructs one of the ASU student athletes
on proper technique at Sparky's Den.

“It kind of just gets rid of these negative connotations that people tend to have about people with special needs: that they can’t do anything, that they’re just kind of a — just basically a problem with society, that they just inhibit people from living their lives,” Warren said. “I think you see these athletes who are going out, who are playing sports just like we are, who are living these normal lives, who are competing, and it kind of closes the gap between the special-needs community and between the regular community of people who live without handicaps.”

In fact, the Gilbert Roadrunners play many of the same sports Arizona State athletes do, including baseball, swimming and track and field. But a joint bowling team was a new undertaking for both groups, one that presented a unique set of challenges — like knowing how to bowl.

It was quickly apparent that the ASU athletes were the ones who needed the most help.

Madison Berridge, a junior on the university’s beach volleyball team, was going through a rough stretch of frames when Sofija Obradovic, a Special Olympian from Chandler, came over to offer some help.

“Her ball, it bounces,” Obradovic says of Berridge’s style. “I’m going to teach her not to make the ball bounce.”

Obradovic says she has been bowling all her life. It showed. By the end of the practice she had the high score of 119. She attributed her success to the adjustments made on the day. “When I bowl, the ball moves to the side. I bowled straight today,” Obradovic said.

She’s a player you can build a team around. And her skills helped some of the ASU student-athletes readjust their perceptions of people with limitations.

“Even though they have a disability, that doesn’t define their ability to do other things,” said Elisha Davis, a senior guard on the ASU women’s basketball team. “As you can see, some have hit strikes — I haven’t hit a strike yet.” 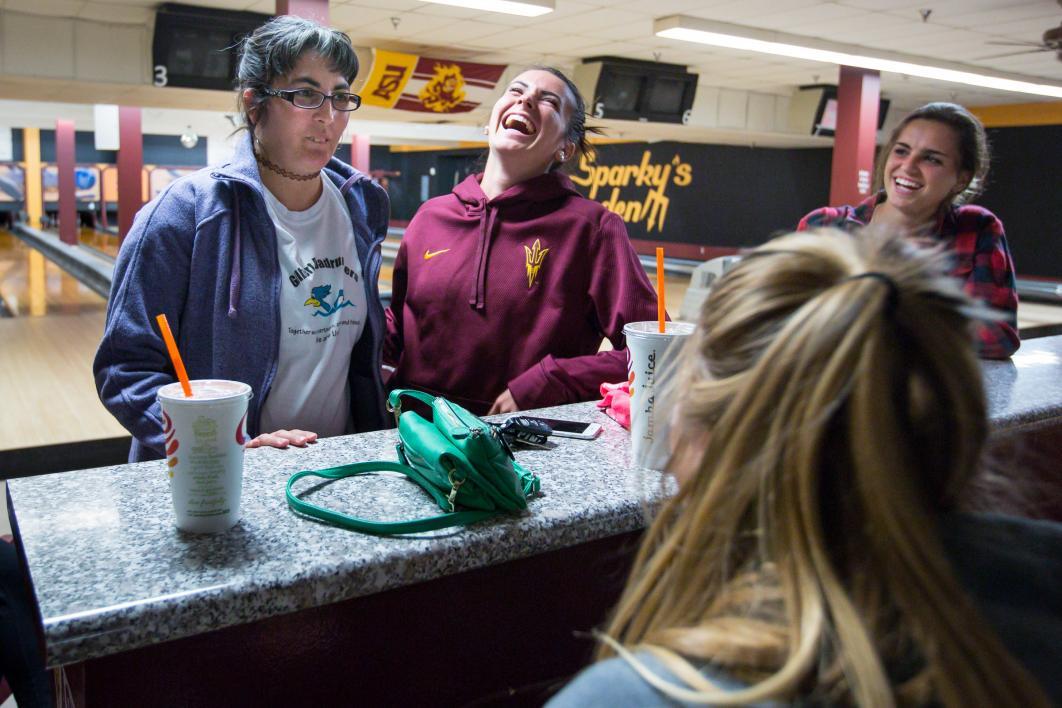 (From left) Sofija Obradovic of Chandler jokes around with varsity soccer players Cali Farquharson and Annie Warren before they begin to bowl at Sparky's Den in the Memorial Union basement on Nov. 10. Farquharson is a senior in biological sciences, and Warren is a junior in economics and political science. Warren also serves as president of ASU’s Student Athletic Association. 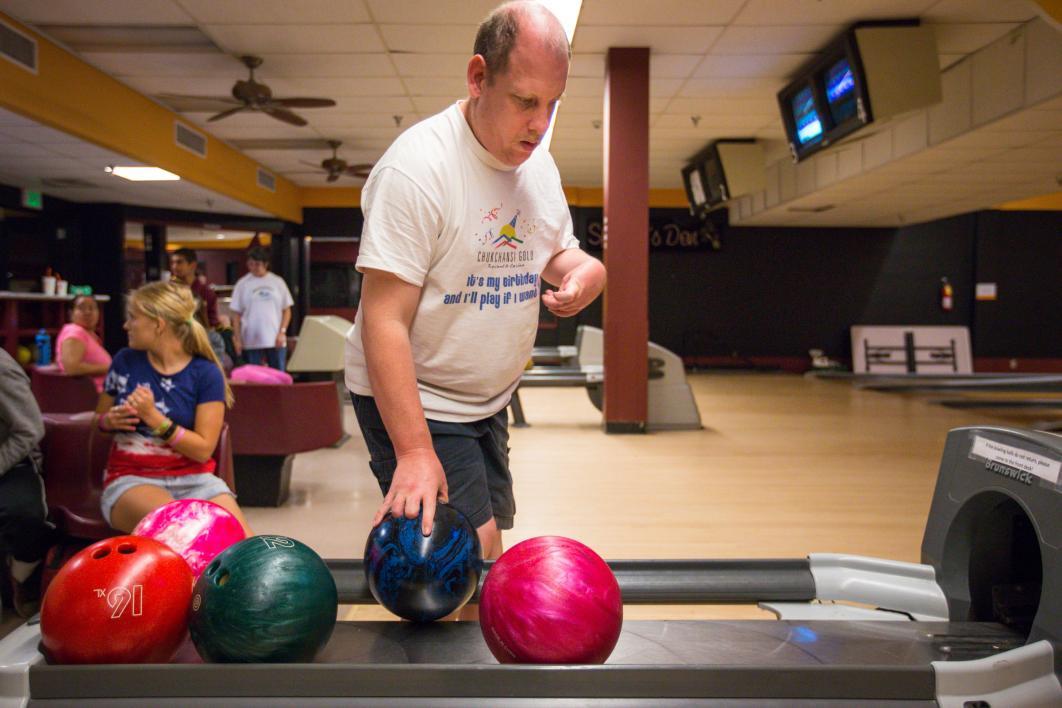 Special Olympian Danny Lambert of San Tan Valley grabs a bowling ball at Sparky's Den on Nov. 10. The squad's bowling season is over, but they'll look to begin a new season after the winter break with more athletes from both ASU and Special Olympics Arizona forming a track and field team. 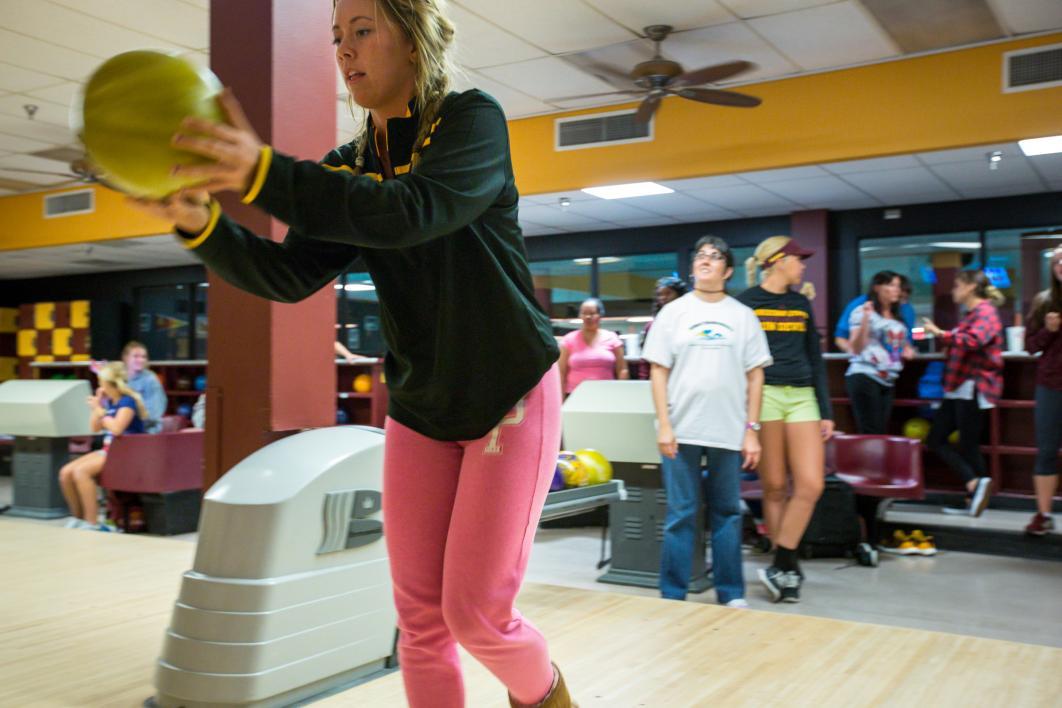 Beach volleyball player Madison Berridge, a junior in sociology, takes her bowling turn at Sparky's Den in the Memorial Union on Nov. 10. 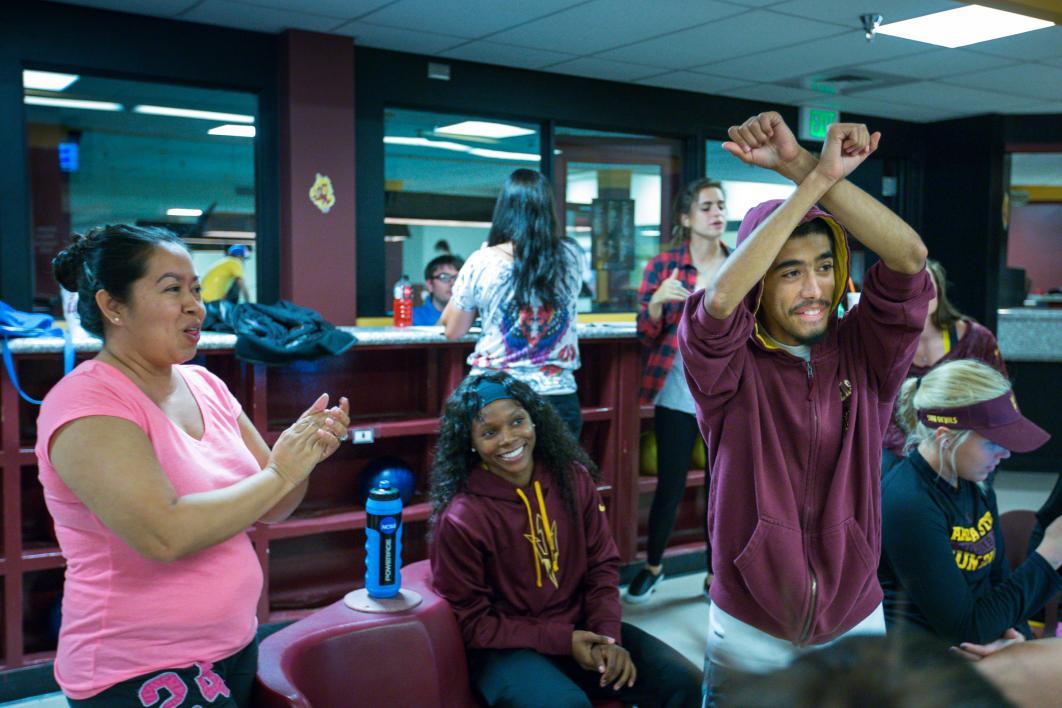 Special Olympian Jorge Marquez, 16, of Mesa celebrates a partner's strike at Sparky's Den. Behind him, his mother, Dominique Counga (left), and basketball player Elisha Davis join in the merriment. 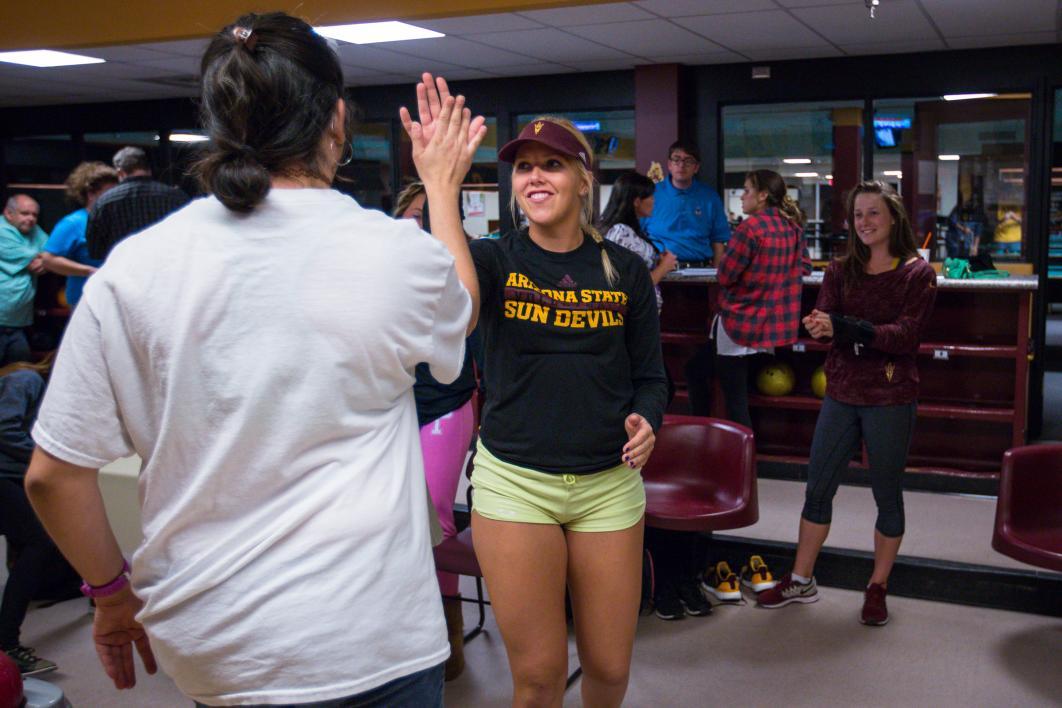 Special Olympian Sofija Obradovic gets congratulated on her turn by beach volleyball player Bethany Wedepohl at Sparky's Den. Wedepohl is a freshman in business communications.

Some of the Special Olympians were also learning the finer points of bowling, like 16-year-old Jorge Marquez of Mesa.

“I’m learning how to bowl. I appreciate learning and people telling me how,” he said in sign language interpreted by his mother, Dominique Colunga. “I enjoy coming to ASU, it’s my favorite. I love supporting ASU; it’s wonderful. I want to come here for college.”

The team traveled to Mesa for a bowling tournament featuring 22 unified teams at the Brunswick Zone on Friday. One athlete, 16-year-old Daerick Dalton of Gilbert, bowled a career-best 108 in an entertaining back-and-forth between him and Marquez, in their own personal “rivalry.”

The best bowlers of the team received medals that day, which marked the end of the bowling team’s season. The squad will look to begin a new season after the winter break with more athletes from both ASU and Special Olympics Arizona forming a track and field team.

“With these athletes, a lot of them aren’t the only children, they come from houses with siblings, and these children and these athletes grow up in houses where they go to their siblings’ soccer games, their basketball games. They’re always the person cheering someone else on,” Warren said. “And the amazing thing about Special Olympics is it allows these athletes to be the ones getting cheered on, to be the ones in the sports, not for once being the kid carpooled everywhere to go and watch their siblings complete — and you just realize that they’re just like the rest of us.”

Associate professor Steven Semken of Arizona State University's School of Earth and Space Exploration (SESE) is a co-editor of a geology guidebook that has been given an award for excellence in geoscience publishing by the Geoscience Information Society (GSIS) at its annual meeting in Baltimore.The book is "Geology of Route 66 Region: Flagstaff to Grants." It is a guide to the geology, history, ar...

Associate professor Steven Semken of Arizona State University's School of Earth and Space Exploration (SESE) is a co-editor of a geology guidebook that has been given an award for excellence in geoscience publishing by the Geoscience Information Society (GSIS) at its annual meeting in Baltimore.

The book is "Geology of Route 66 Region: Flagstaff to Grants." It is a guide to the geology, history, art and archaeology of northern Arizona and western New Mexico. Maps, road logs and a mix of scientific and popular articles add to the work's appeal for many audiences. The book was published by the New Mexico geological society in 2013. The other editors are Kate Zeigler, J. Michael Timmons and Stacy Timmons. 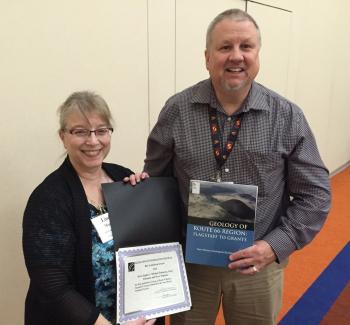 Associate professor Steven Semken of Arizona State University's School of Earth and Space Exploration is a co-editor of a geology guidebook that has been given an award for excellence in geoscience publishing by the Geoscience Information Society at its annual meeting in Baltimore. The book is "Geology of Route 66 Region: Flagstaff to Grants." Download Full Image

The award was accepted by Semken, an ethnogeologist and geoscience education researcher at SESE, a unit of the College of Liberal Arts and Sciences.

The Best Guidebook Award was established by GSIS to recognize and promote excellence in this important type of geoscience literature.

The Geoscience Information Society is an international professional organization devoted to improving the exchange of information in the earth sciences.  The membership consists of librarians, editors, cartographers, educators and information professionals. Information about the society may be found at its website www.geoinfo.org.