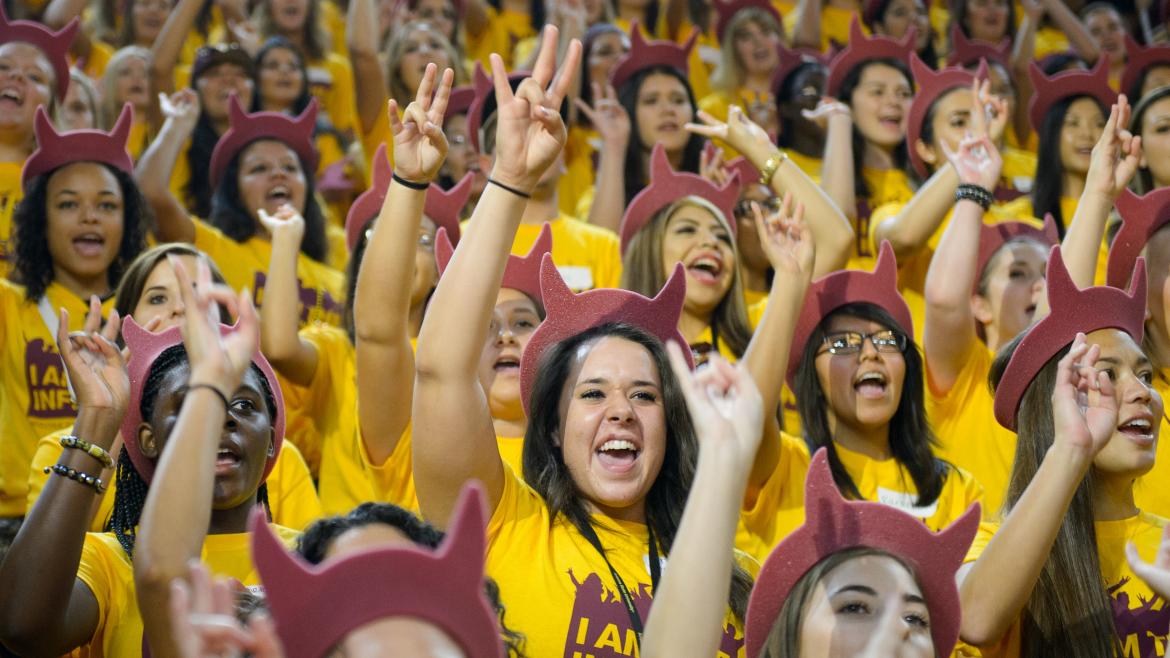 Getting to know ASU's students

We take readers inside different slices of the Sun Devil community

ASU boasts a diverse population of students from near and far. In this series, we take a peek inside the lives of a variety of Sun Devils. We'll add more stories over the next two weeks.

Shifting to college life can be a tough transition for any student, but students who come to ASU from the military have unique concerns and situations that make the change more complicated. Thats why ASU has programs and services to help veteran students succeed in their academic pursuits.

The daily grind: ASU student-athletes work hard for their success

ASU student-athletes say their lives are a busy balance of achieving student and athletic success, but they would not have it any other way.

The tough transition: International students help one another adjust to ASU

There are about 9,800 international students at Arizona State University, and they’ve taken a variety of paths to ASU. And although these students come from all over the world, they face similar issues once they get here — from language barriers to the acclimation of a new culture.

As if homework wasn't enough to worry about, Tony Bothwell has freeze rays to contend with. That's the life of this ASU online student balances a full time job in California and parenting a "Despicable Me"-loving kid with earning a degree in graphic information technology. Bothwell's drive is typical of ASU online students - people who want to add to their successes or improve their futures by earning degrees from home.

Researchers at the State University of New York-Downstate Medical Center and Arizona State University have published the first study of levels of parabens — antibacterial substances commonly used as preservatives in cosmetics and other products — in human cord-blood samples.The researchers found that a cohort of pregnant women in Brooklyn predominantly of Caribbean- and African-American descen...

Researchers at the State University of New York-Downstate Medical Center and Arizona State University have published the first study of levels of parabens — antibacterial substances commonly used as preservatives in cosmetics and other products — in human cord-blood samples.

The researchers found that a cohort of pregnant women in Brooklyn predominantly of Caribbean- and African-American descent had the highest level worldwide of methyl paraben and propyl paraben.

The results were published online in the journal Environment International, in an article titled, "Maternal and fetal exposure to parabens in a multiethnic urban U.S. population."

The article notes that parabens have been used for decades and, at recommended levels, are "generally recognized as safe" by the U.S. Food and Drug Administration and the European Union.

However, parabens have the potential to disrupt the expression of hormones during influential times of development, possibly affecting fetal, child and even adult health.

The authors point out that recent studies have raised awareness for potential health effects, particularly during fetal development and in children younger than six to 12 months of age, a period when detoxification systems are still immature, "and thus leaving the exposed more vulnerable," notes senior author Rolf Halden, PhD, professor and director of the Biodesign Center for Environmental Security at Arizona State University.

Article co-author Laura A. Geer, PhD, MHS, associate professor in the Department of Environmental and Occupational Health Sciences in the School of Public Health at SUNY Downstate, said, "What we know from the study is that parabens are being transferred from pregnant women to their fetuses. This is problematic because parabens have demonstrated endocrine-disrupting potential in animal studies, leading to developmental and reproductive disorders. It is too early to know if these same effects can occur in humans, and if so, at what levels of exposure."

"I would not characterize these findings as alarming, but rather of concern, since we do not have relevant regulatory limits for these substances,” Geer said. “The European Union countries set limits by volume per product, a good starting point. Limiting exposure to these substances is complicated because of their ubiquity in personal care and consumer products. Higher exposure levels in more vulnerable populations, such as in our study, gives further justification for us to answer the questions of what higher levels mean for health."

In a follow-up study, the authors are examining possible impacts on birth outcomes; results are forthcoming.