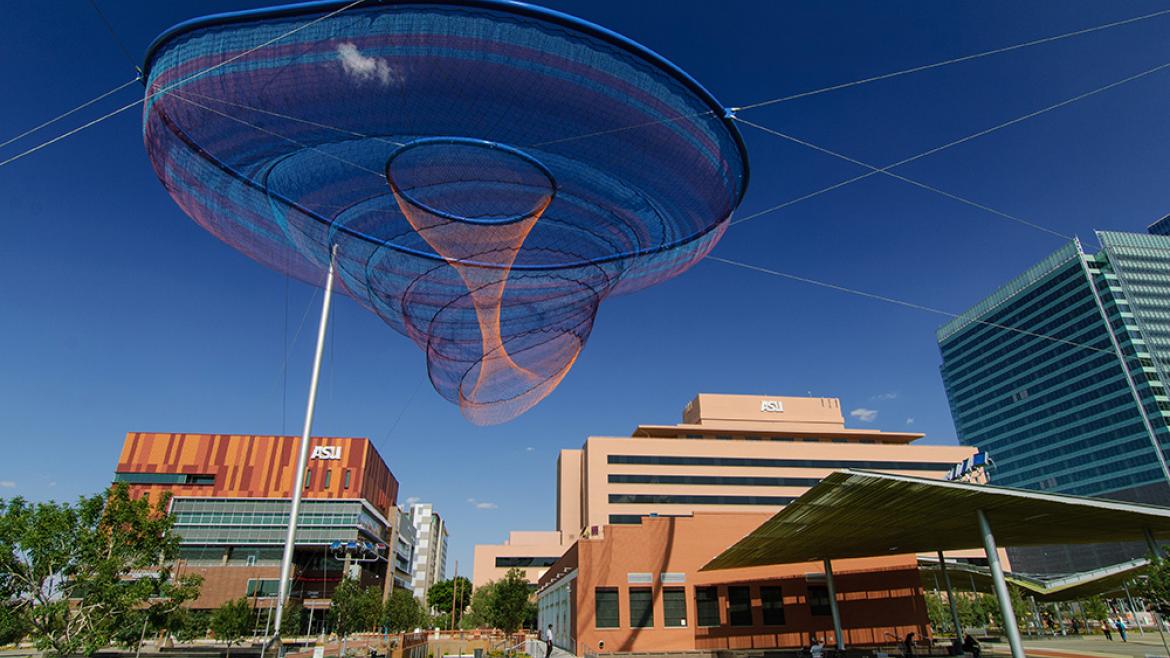 On the Downtown Phoenix campus, ASU offers students academic and urban lifestyles in the heart of Arizona's capital. With more than 11,500 enrolled students, the campus offers a wide variety of schools and colleges, including nursing, journalism, future of innovation, health solutions, letters and sciences, public service, teaching and soon the Sandra Day O’Connor College of Law. 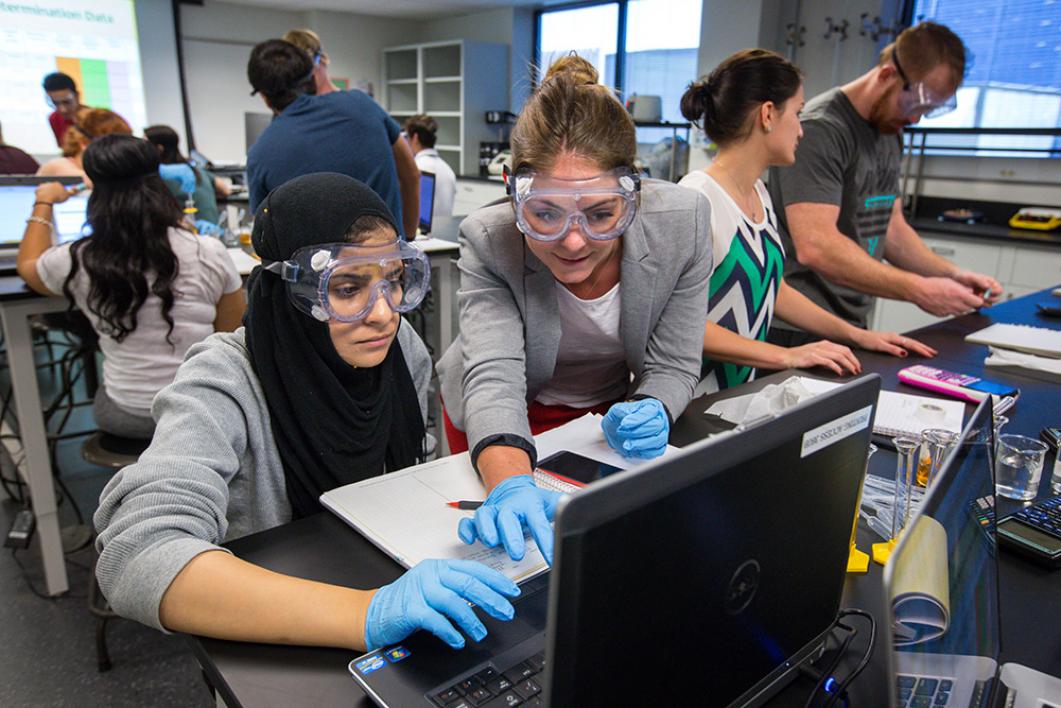 Diana Alshalabi (left) and Kelly Champlin work together in their chemistry lab in the University Center building. 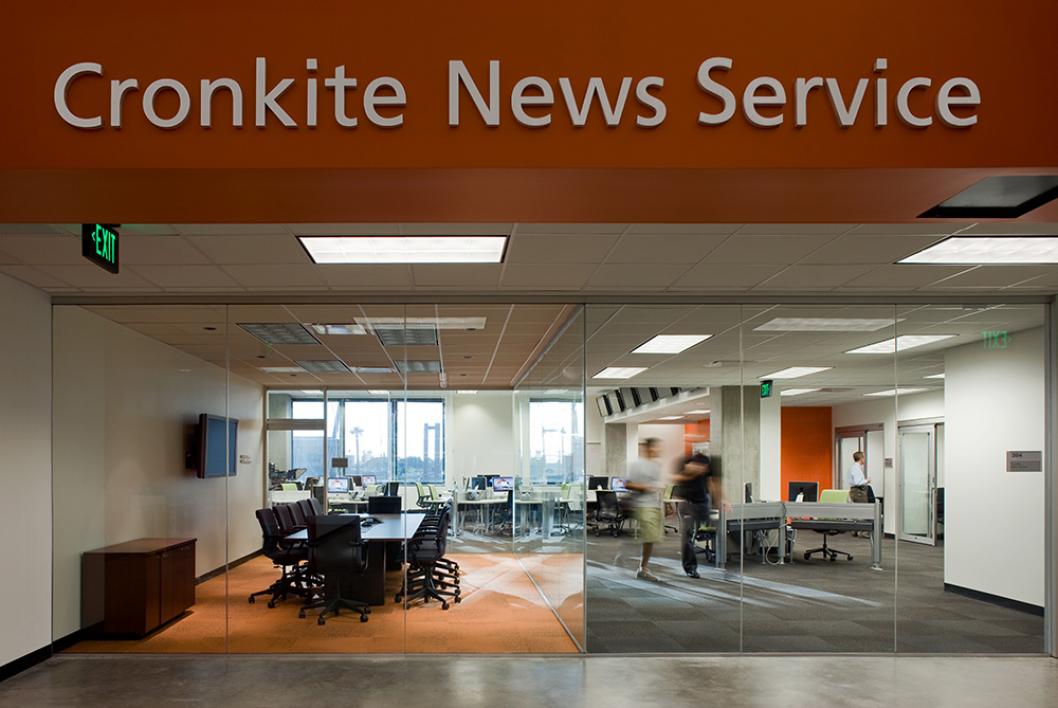 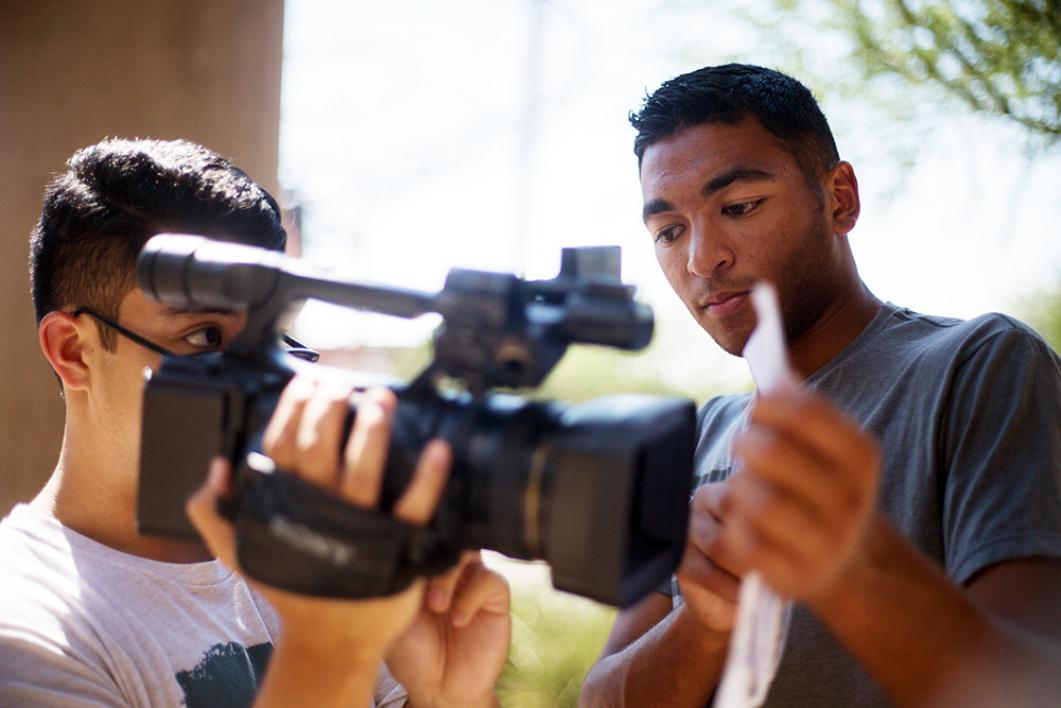 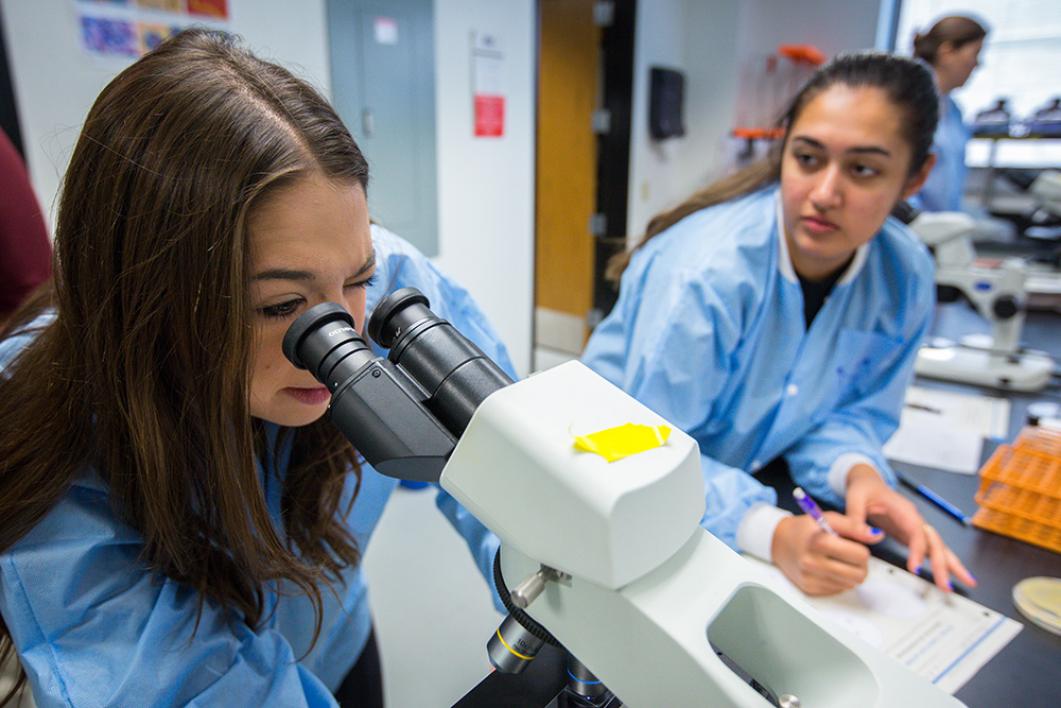 Allison Lucas looks at a slide under her microscope in the microbiology lab. 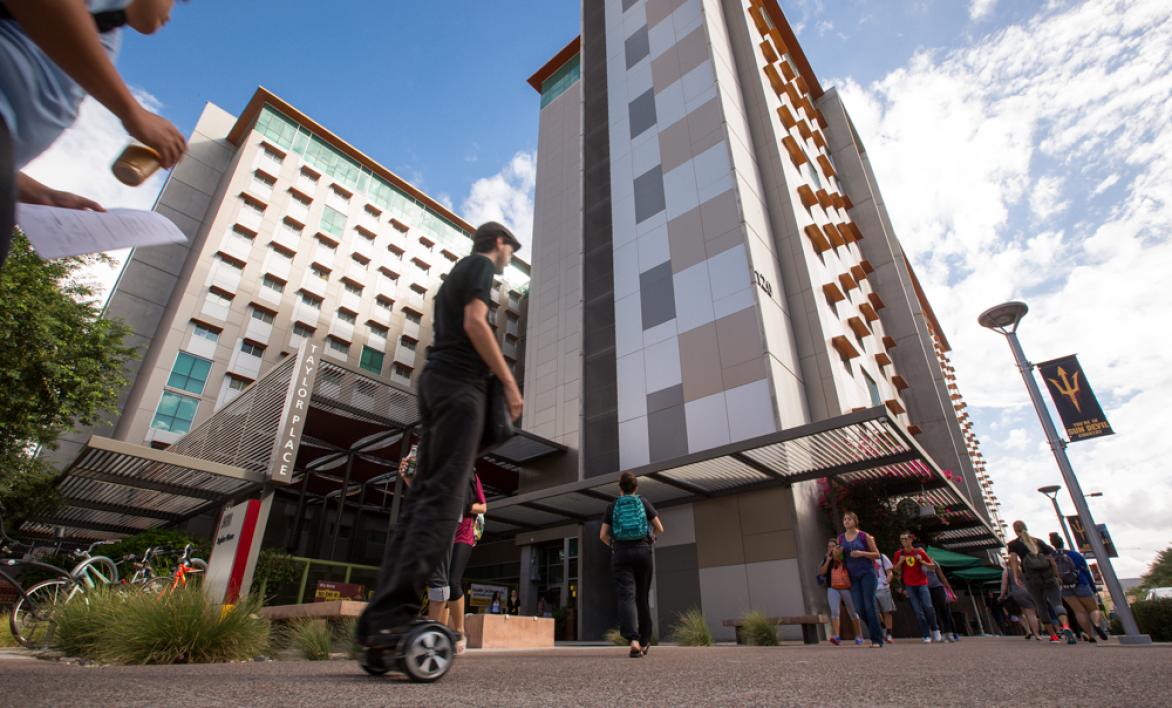 Students pass by residential hall Taylor Place in the heart of the Downtown Phoenix campus. 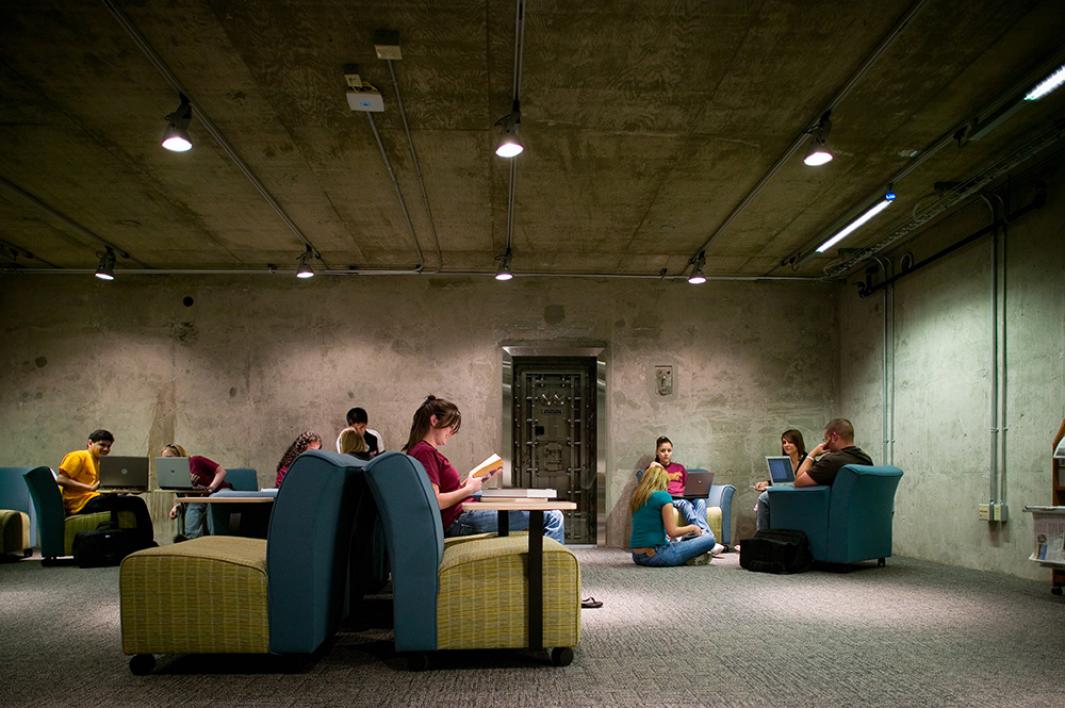 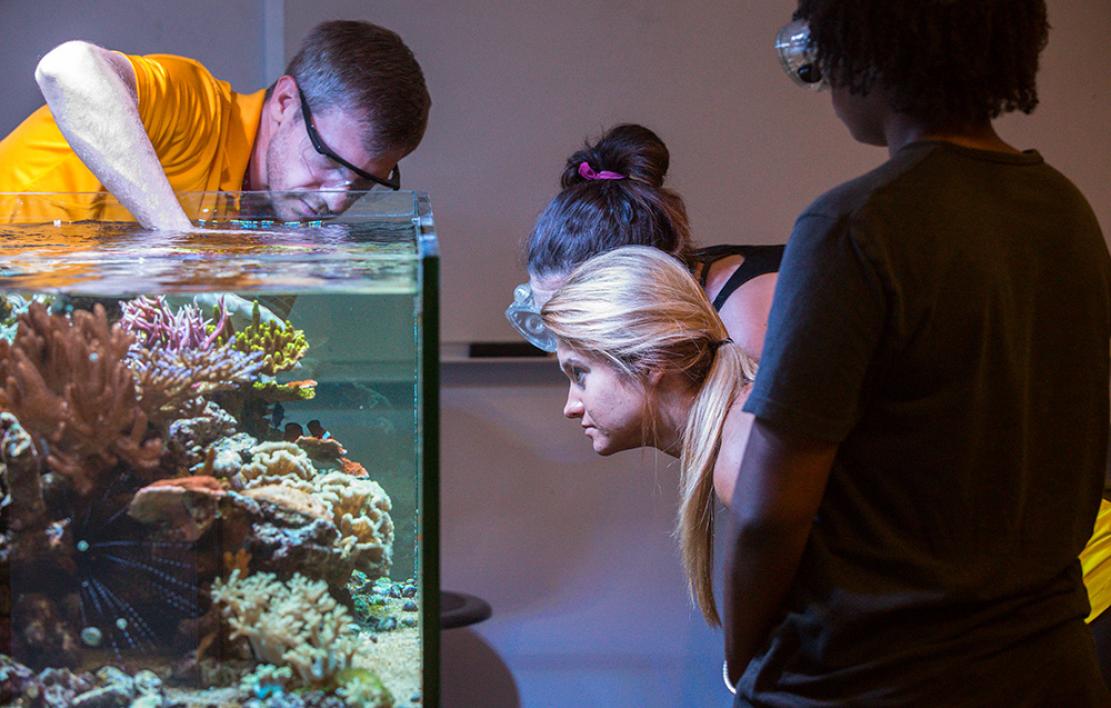 ASU lecturer Cayle Lisenbee (left) points out some of the animals in a salt water aquarium to Morgan Bowen and others in the general biology lab. 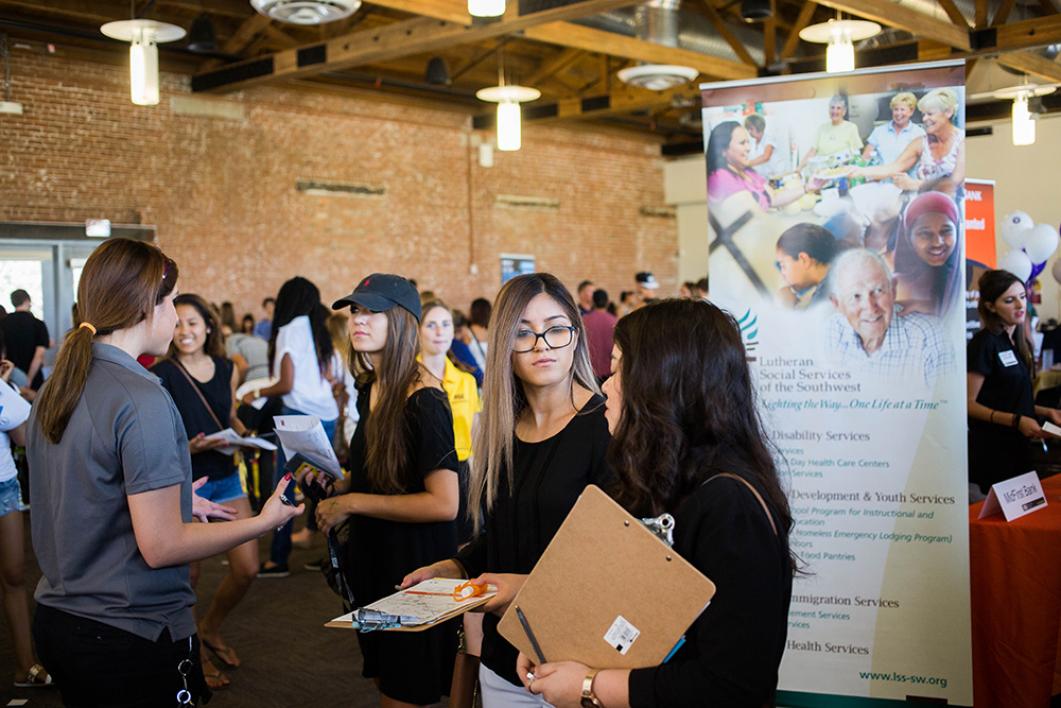 Hundreds of students filtered in and out of the Downtown Campus Career Fair at the historic A.E. England Building. 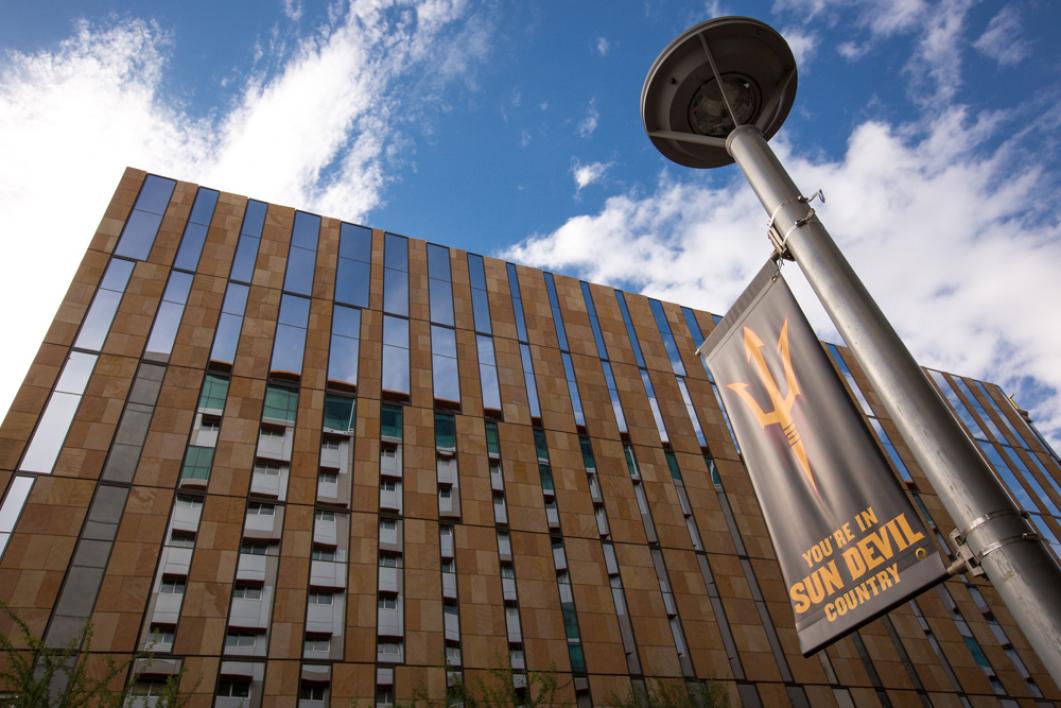 Residential hall Taylor Place is reflected in the windows of the Arizona Center of Law and Society, future home of the Sandra Day O'Connor College of Law. 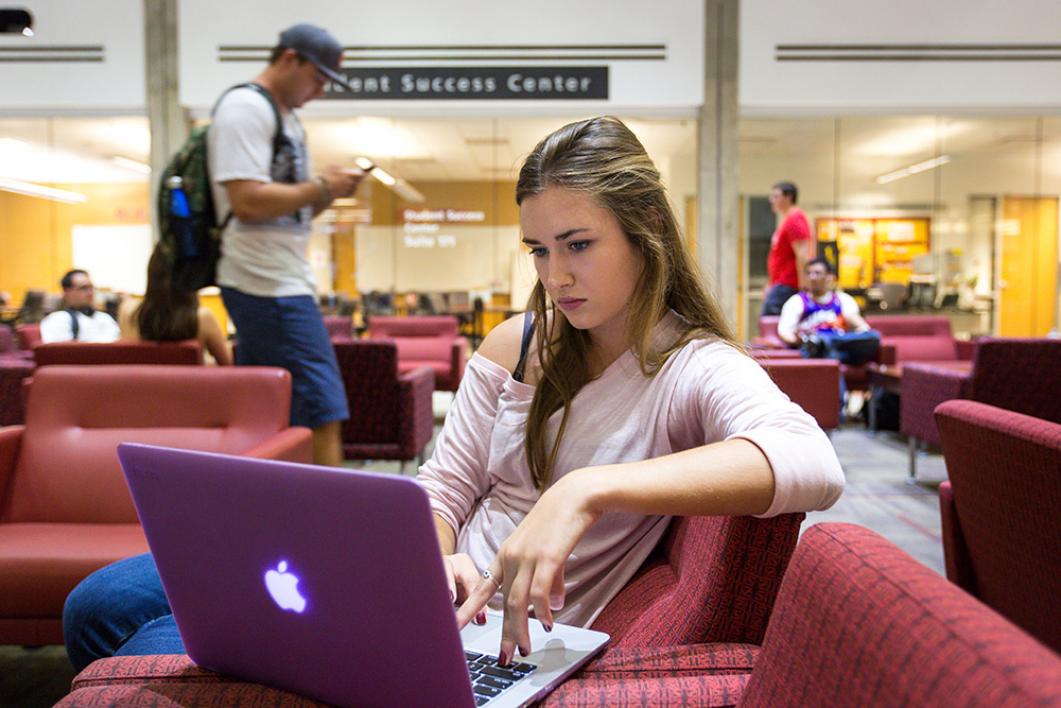 Olivia Davila does some work between classes at the University Center Commons. 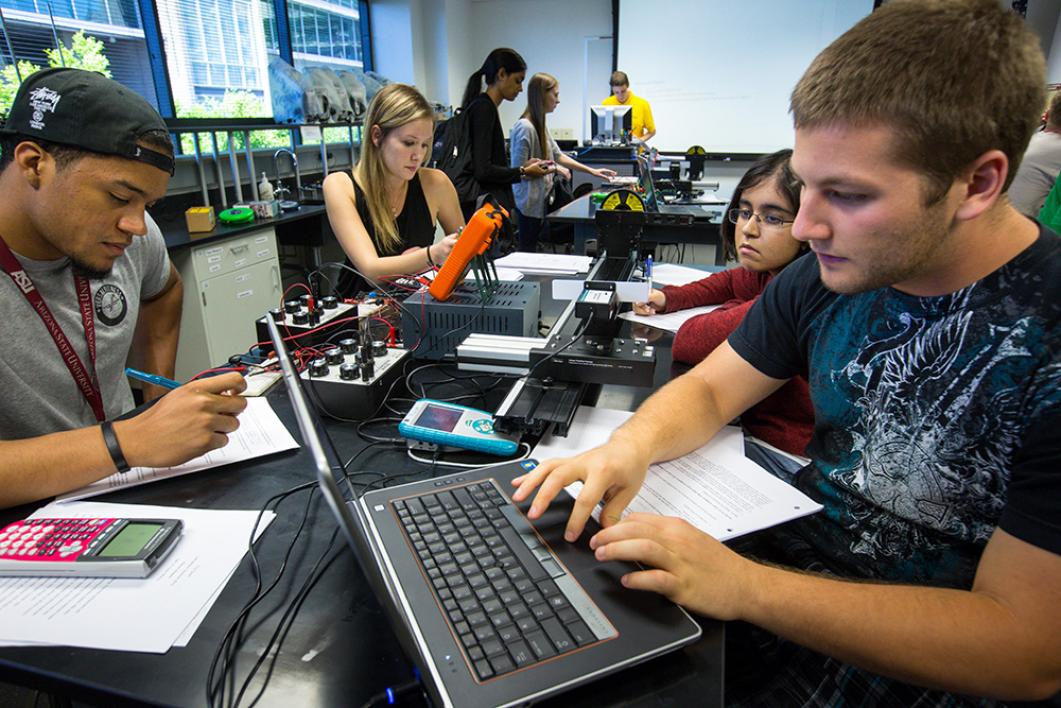 Physics students work on measurements from a laser diffraction and light interference. 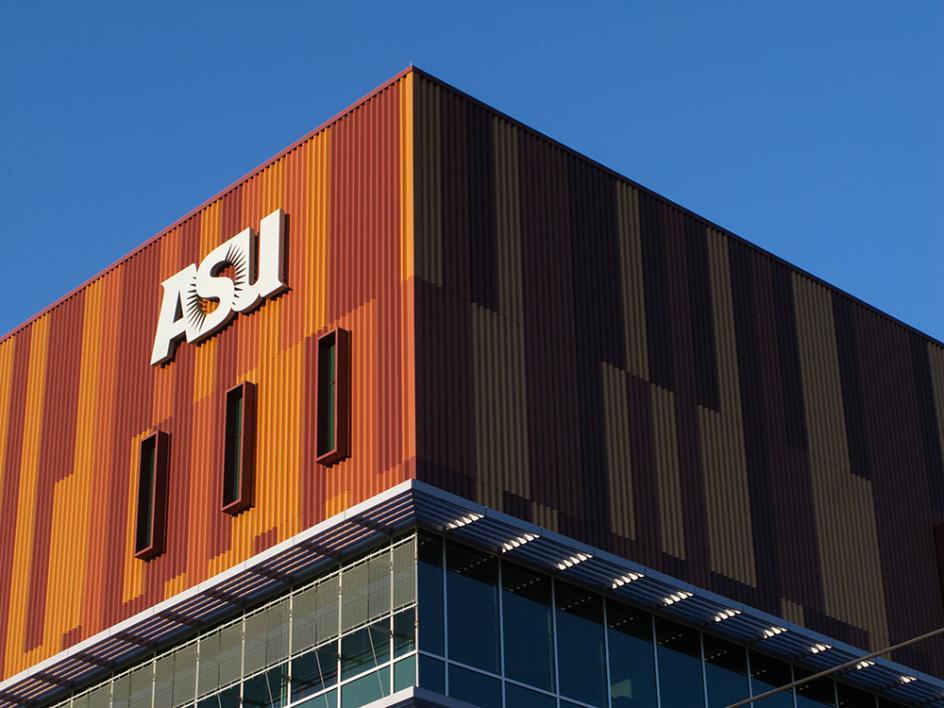 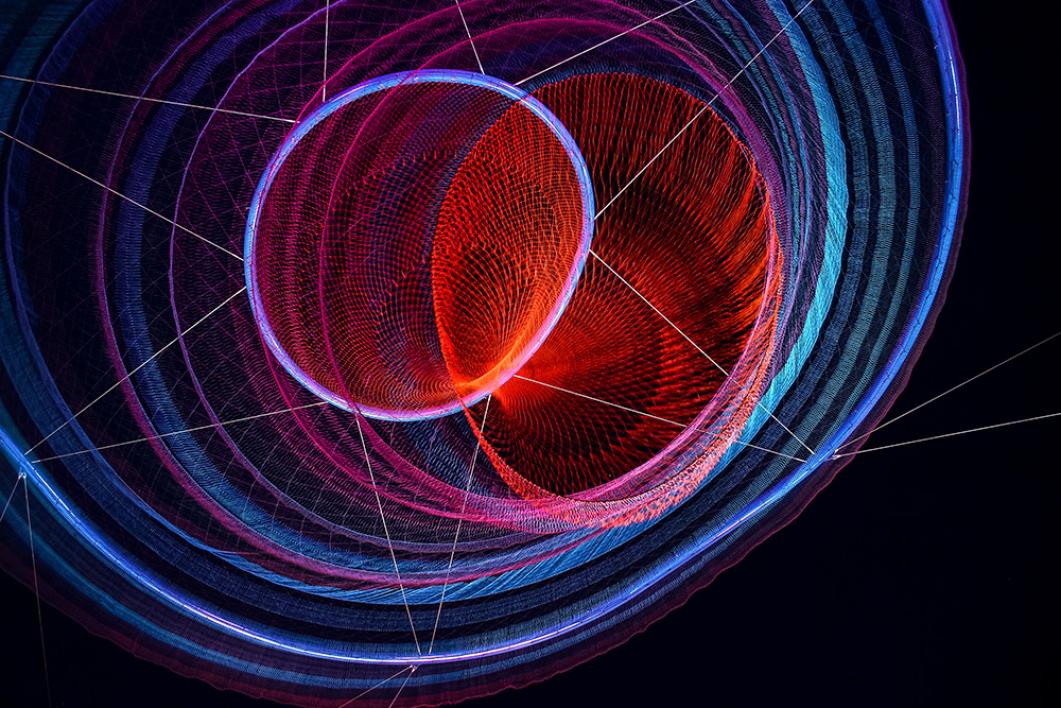 Janet Echelman's 2009 art work, "Her Secret is Patience," floats above the civic space park, which is a "bridge" between the ASU and surrounding community, and accommodates a variety of uses, events and daily functions of the university.

This summer President Barack Obama became the first sitting president of the United States to visit a federal prison, touring one in Oklahoma. He did so at a time when the country’s criminal justice system is under intense scrutiny for its number of incarcerated individuals — though the U.S. represents about 4.4 percent of the world's population, it houses around 22 percent of the planet’s p... 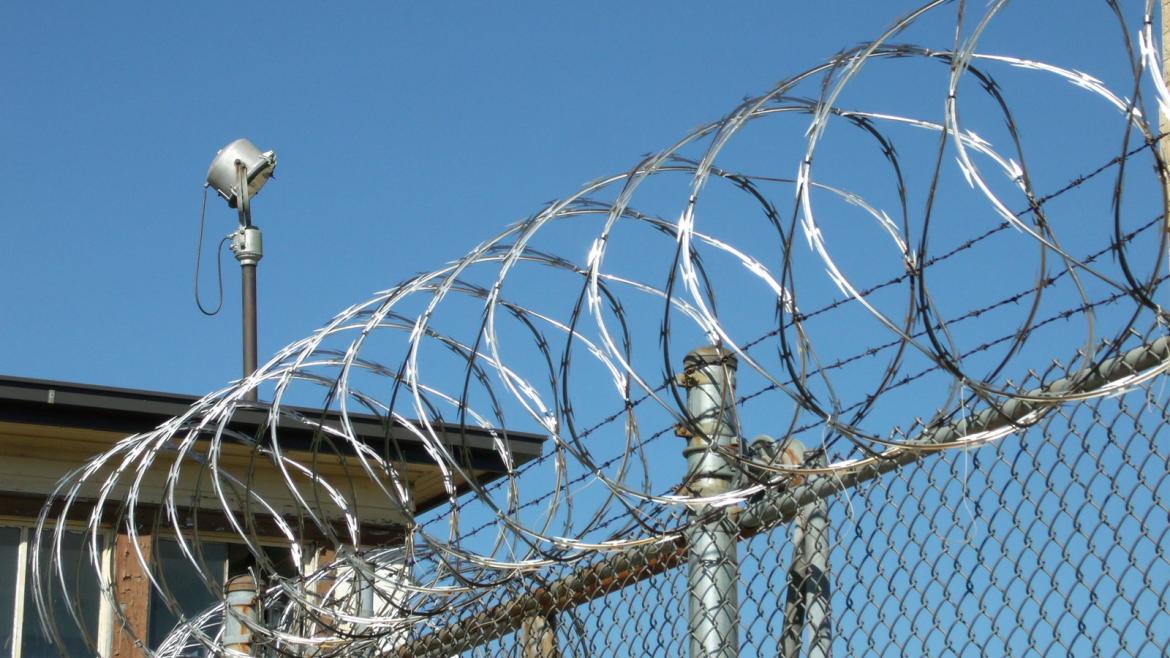 ASU's Prison Education Initiatives began with English but grew to many subjects.
Students call teaching in the prisons a highlight of their time at ASU.
In one supermax class, the inmates spent the entire class in individual cages.
October 21, 2015

ASU students, faculty teach behind bars for Prison Education Initiatives and benefit as much as the inmates

This summer President Barack Obama became the first sitting president of the United States to visit a federal prison, touring one in Oklahoma. He did so at a time when the country’s criminal justice system is under intense scrutiny for its number of incarcerated individuals — though the U.S. represents about 4.4 percent of the world's population, it houses around 22 percentAccording to the International Centre for Prison Studies. of the planet’s prisoners.

Considering the sheer number of people behind bars, one of the topics addressed by Obama during his prison visit was the importance of education for inmates.

“It’s a really practical concern, and I think it’s an important one,” agreed Wells.

This spring, Wells took over as director of ASU’s Prison Education Initiatives, members of which were honored Oct. 3 at the Arizona State Department of Corrections' fourth annual Volunteer Appreciation Dinner with awards presented by the Florence and Eyman state prisons. 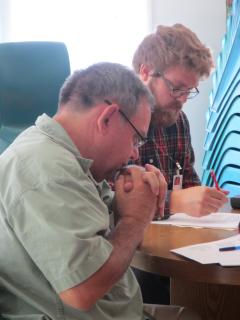 The program got its start when ASU associate professor of English and former director Joe Lockard (left, with creative writing master’s student Bryan Asdel) began teaching at the Arizona State Prison Complex­–Florence in 2009 and realized it might be something his students could benefit from as well.

“Teaching in a prison brings you back to the basics of teaching. There’s no mediated classrooms, there’s no high-tech; it is you, the students and a blackboard, if you’re lucky,” Lockard said. “It is the fundamentals of teaching.”

The initiative started out as the ASU Prison English program, providing opportunities for mutual learning and engagement between ASU English students and prisoners at Florence.

Interested students would sign up, go through a lengthy and complicated process to be approved to teach in the prison and then head the nearly 60 miles southeast of Tempe to the state prison complex, where they would read stories, have discussions or write with convicted criminals. 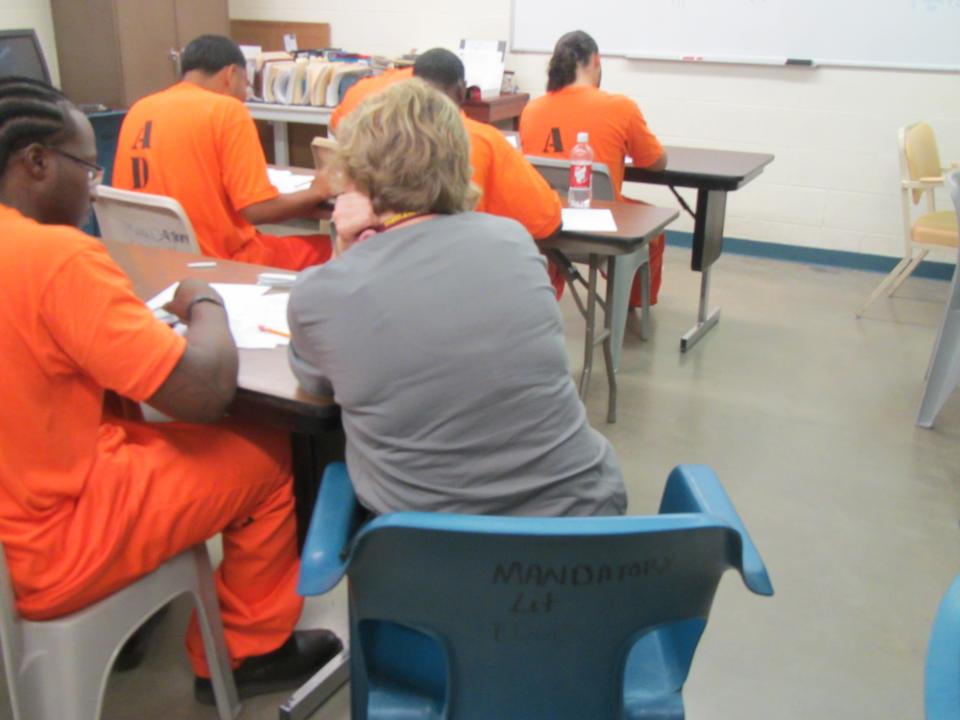 Janet Sipes, graduate student and teaching associate in ASU’s School of Mathematical and Statistical Sciences, tutors a student in a prison class that teaches eighth-grade to GED-level math skills. Fall 2015 is the first semester that ASU-generated math help has been available to inmate learners. Before this, they struggled on their own to study for the GED and other tests. Four ASU math teachers visit Florence and Eyman state prisons every Friday for two hours at each prison. Photo courtesy Corri Wells

One student, Tina Cai, broached the idea of teaching Chinese. Admittedly, Lockard wasn’t sure how that would fly.

“The prison admin said ‘What? You want to give them a language they can speak and we can’t understand?’” he recalled.

Despite the chilly reception, Lockard pressed on.

“It’s very important to listen to students and their ideas,” he said.

The Chinese course was eventually approved and now maxes out at 29 students, roughly eight of whom have reached the intermediate level.

Cai, now a Columbia University grad student, reported in the 2014 ASU Prison English Project newsletter how even learning a subject as seemingly impractical as Chinese bolstered the inmates’ self-confidence.

“When asked to elaborate on the personal and intellectual rewards of learning Chinese, my students offered variations on a theme: the sense of achievement derived from overcoming intellectual obstacles,” she wrote.

“I asked [Joe Lockard] whether anyone was teaching biology in this particular program,” she said. “They weren’t, but he got the biology class approved and said, ‘If you want to do it, you’ll start in September.’ I panicked, to be honest.”

But with the help and support of School of Life Sciences professor Tsafrir Mor and several doctoral students, Larson got the biology class up and running for the fall 2014 semester.

By that time, the Prison English program had expanded to teaching classes at nearby Arizona State Prison Complex–Eyman as well as Florence. The addition of the Chinese and biology classes — along with others like philosophy and theater — prompted the collective rebranding of the programs as the ASU Prison Education Initiatives. 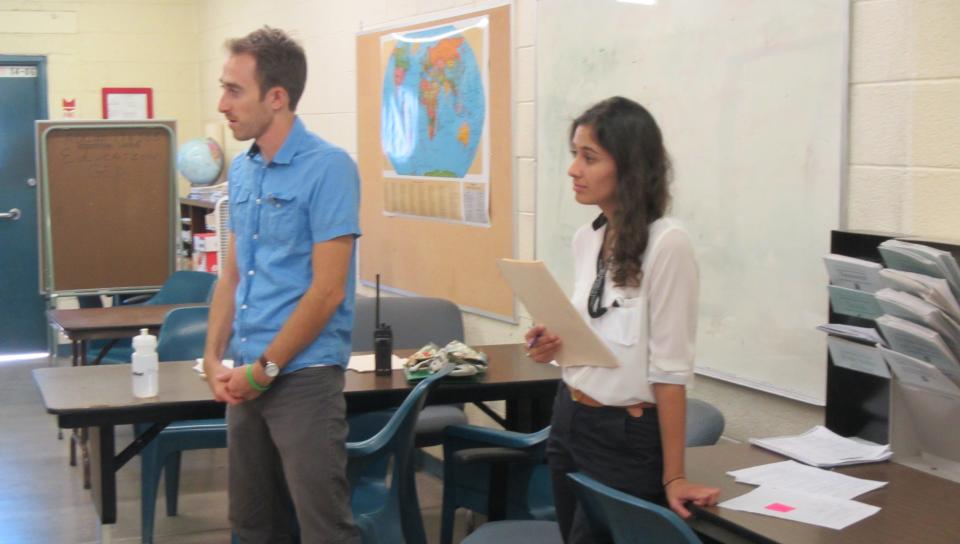 The new biology class was to be taught in a supermax facility at Eyman, called the Browning Unit. All of the inmate students arrived in restraints and spent the entirety of the class in individual steel cages.

The conditions added a degree of difficulty for Larson and the other biology teachers, but in the end, the class was deemed a success and was renewed for the 2015-2016 academic year.

Larson called the experience “a highlight” of her time at ASU, and Mor expressed admiration for her “commitment and idealism.”

“I believe that education is a human right that people should not be deprived of, even at supermax security prisons,” Mor said. “Moreover, it is in society’s best interest because providing such opportunities to inmates carries societal dividends.”

Among the benefits to society, Lockard cites the fact that introducing education to inmates significantly reduces recidivism rates.

“There is a very strong bipartisan recognition … that the rate of recidivism is vastly high and needs to be lowered, and education is the answer. It’s unquestionable that education helps prevent recidivism,” he said.

Wells also teaches the course English 484: The Pen Project, a Department of English writing internship and a facet of the ASU Prison Education Initiatives that got its start in 2010 after the initial success of the Prison English program.

The Pen Project remotely and anonymously pairs ASU student interns with inmates in maximum-security prisons in Arizona and New Mexico. The interns coach inmates wanting to improve their writing skills through a process that involves the handwritten work of inmates being collected by prison staff, mailed to ASU instructors, scanned into Blackboard and transcribed by the student interns.

The student interns then read and critically comment on the inmates’ writing. This individualized instruction is edited by instructors of the course, transferred through Blackboard back to the prisons, printed in hard copy and hand-delivered by prison staff directly to prisoners in their cells.

ASU writing interns currently coach about 150 inmates who, together with the interns, produce between 1,500 and 2,000 pages of writing and critique per semester.

“People are dedicated to it; they get a lot of satisfaction from it. It’s very gratifying to know you’re being of service to people who need it,” Wells said. Jessica Fletcher (left), ASU English undergrad and president of PEAC (Prison Education Awareness Club), and Corri Wells, who took over the Prison Education Initiatives Program this spring, are honored for their volunteerism by the Arizona State Department of Corrections on Oct. 3. Photo by David Wells

Wells serves as a faculty adviser for PEAC, which also raises funds for and develops programs to facilitate effective education in the prison system.

Eric Verska, a 2015 graduate of the W. P. Carey School of Business, found out about PEAC through his mother, a retired former employee of ASU’s Department of English.

His interest in the club went deeper than most. A former drug addict, Verska discovered PEAC during his second stint as an ASU student, his first attempt having ended in failure, followed shortly after by a seven-year, drug-related prison sentence.

While incarcerated, Verska found educational offerings to be invaluable.

“That was huge for me. It built my confidence and provided me with the opportunity to continue to pursue [a four-year degree],” he said.

“Many treat prison as ‘out of sight, out of mind.’ However … the men and women incarcerated are our neighbors and future coworkers; they are the sons and daughters of friends; they are the mothers and fathers to children in our communities. Just as traditional education is considered paramount to well-being, prison education is vital to the humanity and well-being of prison inmates,” she said. Brent Knutson, ASU School of Mathematical and Statistical Sciences lecturer, and Janet Sipes, graduate student and teaching associate, help a student decipher a math problem. Most of their prison teaching is individualized tutoring like this since math skill levels vary dramatically from student to student. Photo courtesy Corri Wells

A chance at redemption

Former creative writing program manager Corey Campbell taught at the Florence state prison for three years and wrote about it in an introduction to the spring 2015 issue of Insiders, an online journal that features the writing of inmates.

During that time, she developed a bond with her inmate students that gave her a deeper appreciation for their experience.

“I think there’s an undercurrent of despair throughout the prison, throughout the yard, and anything that they can do to engage with the outside world is going to help them and remind them that they are human beings and they are part of the group; they’re not just thrown away somewhere,” she said.

Wells argued a similar point in her introduction to the summer 2015 Prison English newsletter, posturing that what the ASU Prison Education Initiatives and other programs like it offer is more than just a lesson on how to dissect a sentence or solve a math equation — what they offer is a chance at redemption.

“Anyone — even someone sentenced to die in prison for heinous acts like rape and murder, as well as someone convicted of much lesser, so-called ‘victimless’ crimes like drug possession — is capable of life-altering growth and transformation ... to their last breath.”