They may patrol the campus mall. They may bust some sweet Segway moves. But don’t mistake them for mall cops.

The Arizona State University Police Department (ASUPD) is an independent, fully functional arm of the greater Arizona police force. It’s been in operation since 1948, but for the first time, the department opened its doors Oct. 14 and 21 to host a two-day course detailing the inner workings of the university’s peacekeeping agency.

“The whole concept of people not understanding what we do for our community was really driven home to me about five years ago,” said Michele Rourke, commander of the West campus. “I was in the elevator at Computing Commons going up to meet someone and a lady gets on and a gentleman gets on. The lady looks at me and says ‘Is something going on?’ I said, ‘No, I’m just going to meet somebody and talk about an issue.’”

“No, I’ve worked here 12 years and I never knew we had a police department,” the lady replied.

To shed some light on the day-to-day operations of ASUPD, students, faculty and staff in attendance were greeted with presentations from every facet of the department’s operations including counselors, detectives and dispatchers.

Over the course of the two days, one of the biggest points the academy drove home was that the job of an officer entails a great deal more than just enforcing the law. For example, ASU hosts approximately 1600 special events a year — an average of more than four per day — all of which are reviewed by a two-man branch of the department that determines if an event requires a police presence. Disney, ASU Police Department's explosives-detection K-9, steals the show on the second day of the department’s Community Police Academy on Oct. 21. The program is designed to familiarize university students and employees with the department. Disney is a six-year veteran of the force and relishes the attentions she gets while working. 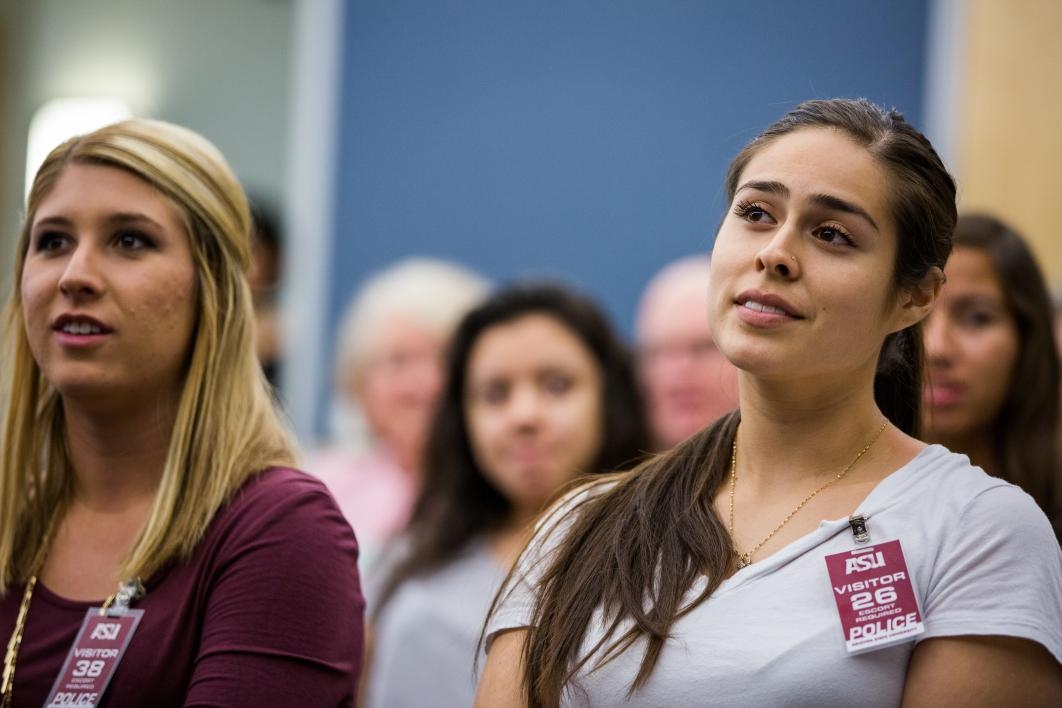 ASU Police Department assistant chief Luigi Digirolamo smiles as he speaks to participants about his time with the department during the Community Police Academy on Oct. 14. 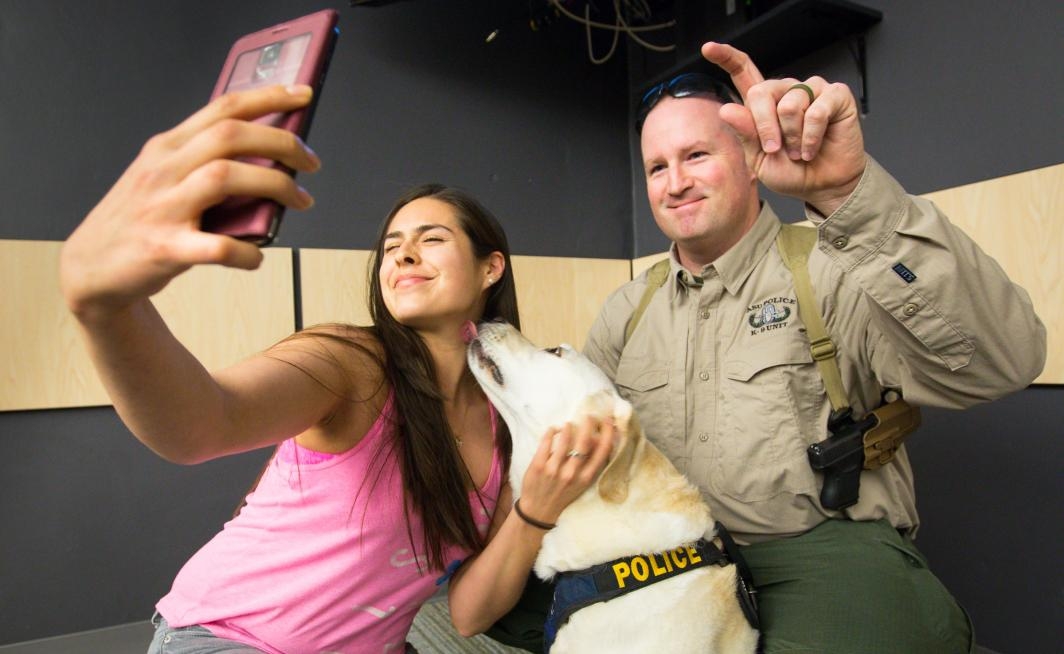 Disney, ASU Police Department's explosives-detection K-9, steals a kiss while posing for a selfie with Grace Cienfuegos and Detective Parker Dunwoody on the second day of the department’s Community Police Academy on Oct. 21. Cienfuegos is a senior in criminal justice and hopes to work with the Phoenix Police Department's K-9 unit. 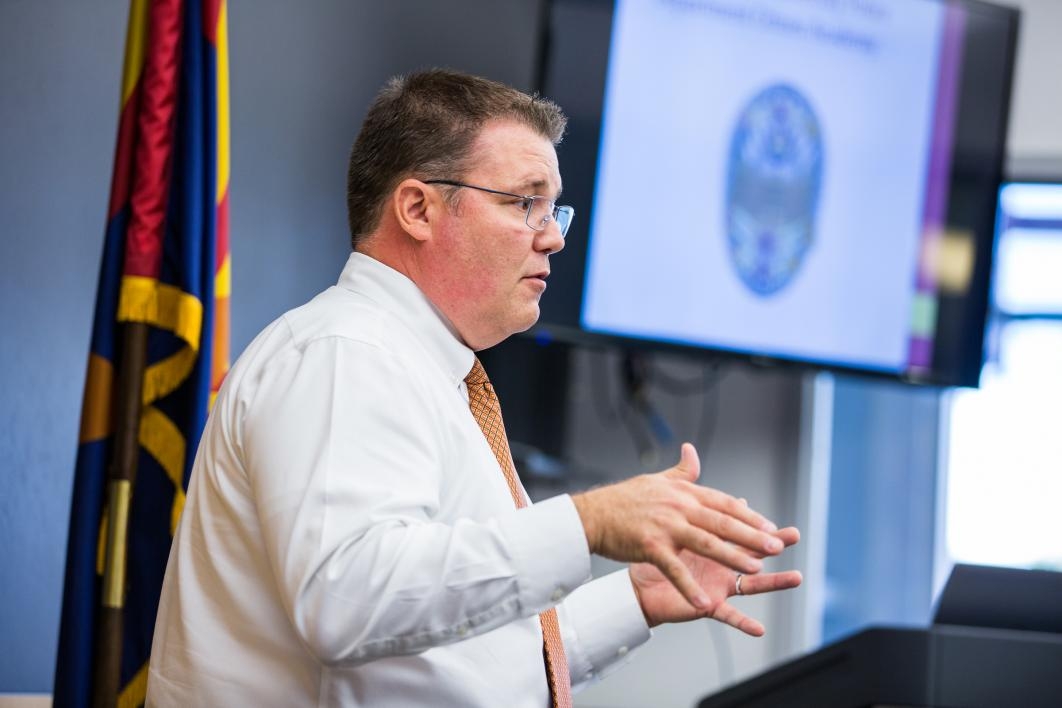 Michael Thompson, police chief of the ASU Police Department, speaks to participants about the organizational structure and operations of the department. 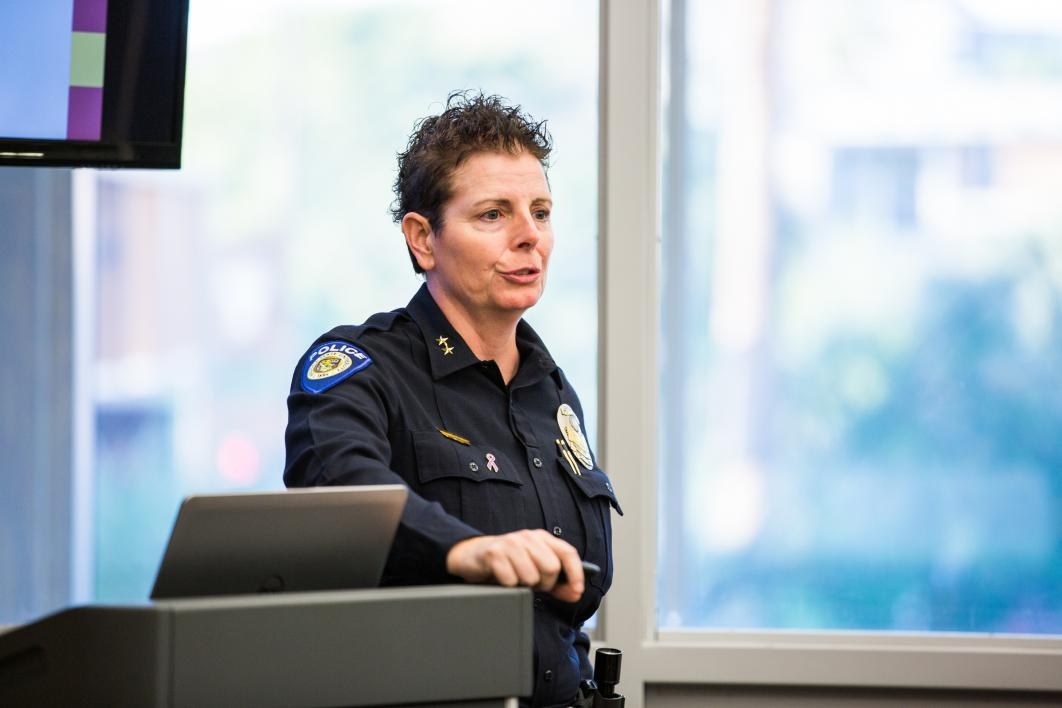 “If we were to follow an officer around all day, you would probably find that a majority of their shift has nothing to do with law enforcement,” said ASUPD police chief Michael Thompson. “It’s to do with assisting our community members, making contacts on campus, taking a report, helping somebody work through an issue, especially on a university campus.

“When I would sit down with police officers that had just been hired on to the department, I would tell them, 'Look, if you have some delusion or some aspiration of rappelling down a helicopter with a machine gun on, then this is not going to be the environment for you to do that in.'”

Thompson emphasized that his department has the tactical resources at its disposal if necessary, but doesn’t see the need for full-time use.

One of those tactical resources isn’t an it, but a she: Officer Disney, a highly trained munitions detection and disposal expert with years of experience working high-profile events across the country like Super Bowl XLV in Arlington, Texas. She also sniffed out a key piece of evidence in a local bank robbery last month.

Disney is, without a doubt, the most popular officer in the entire department. But because she is a yellow Labrador who won’t hesitate to kiss everyone she meets, she tends to have a couple legs up on her colleagues. She is one of the few bomb-sniffing dogs in the area and frequently lends her services to police departments around the state. Her partner, detective Parker Dunwoody gave a demonstration of Disney’s bomb-detecting capabilities during the second day of the academy.

Shortly afterwards, attendees received a completion certificate and a newfound understanding of the stresses, motivations and methods that drive ASU’s peace officers.

“I thought it was very helpful and very informative. I definitely got information I don’t think I would’ve sought out otherwise,” said 19-year-old interdisciplinary studies major Alexa Jimenez. One of her concentrations is homeland security, and she hopes to work for a government law enforcement agency in the future. “It opened up my eyes to a lot of opportunities. I feel very secure about my career and what I want to do.”

The police department is now working on developing an expanded, seven-week version of the academy in partnership with the School of Criminology and Criminal Justice. It’s all a part of including the community and increased transparency, said police chief Thompson.

“What transparency leads to is trust, what trust leads to is cooperation, cooperation then leads to involvement,” Thompson said. “The closer I can get to my community the happier I am. I think that’s how we — as a country, and law enforcement agencies in general — will make progress."

The tough transition: International students help each other adjust to ASU

Editor's note: This feature is part of a series profiling different slices of ASU's diverse population. Find more stories here.Like most newcomers to college, international students can struggle with college rites of passage like making friends or finding the balance between doing classwork and having fun.But their homesickness can be heightened because their families are thousands of miles away a... 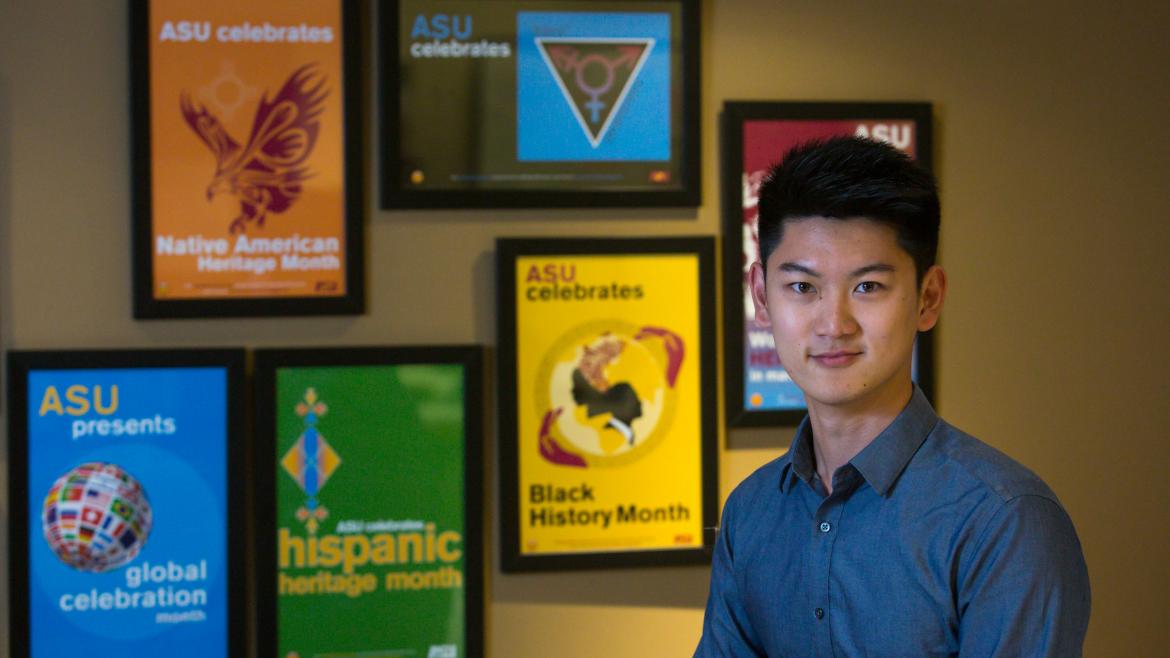 The tough transition: International students help each other adjust to ASU

Like most newcomers to college, international students can struggle with college rites of passage like making friends or finding the balance between doing classwork and having fun.

But their homesickness can be heightened because their families are thousands of miles away and the food is strange and the language is new.

There are about 9,800 international students at Arizona State University, and they’ve taken a variety of paths to ASU.

Maria Jose Quezada of Mexico City methodically considered several universities before choosing ASU, which she liked for its hands-on approach for engineering majors and because it’s a quick four-hour plane trip home.

Yifan “Leo” Liupictured above, photo by Charlie Leight/ASU Now came from China and spent a year with a host family in New Jersey before deciding to attend ASU as a finance major.

And while these students come from all over the world they face similar issues once they get here — from language barriers to the acclimation of a new culture.

Transitioning, and trying to fit in

Quezada said she didn’t feel too homesick when she first arrived, but did get a little surprised.

“Spanish is my first language but I was in a bilingual school my whole life, and I grew up learning both Spanish and English,” she said.

“When I came here, people said, ‘Your accent is so cute!’ At the beginning, it was a little hard to accept the fact that my English wasn’t perfect.

“Sometimes people have the stereotype that you’re not smart enough because you don’t express what you want to say and you don’t have the sophisticated language,” Quezada said.

Liu spent a year with a host family in New Jersey before coming to Tempe, but he still joined in the weekly conversation groups that help international students become more comfortable speaking English.

“We would talk about everything — culture, school life, local restaurants,” he said.

Adjusting to American culture is another hurdle.

“Everyone here wears shorts and if you wear shorts back home every one looks at you like ‘why are you wearing shorts?’ ” said Quezada.

Liu was puzzled by football.

“I did a lot of research from friends and Wikipedia,” said Liu, who’s now a senior. He also attended the “Football 101” explainer event sponsored by the Coalition of International Students.

“After the first game I didn’t want to miss one. It’s impressive. Everyone wears the same color shirt.” 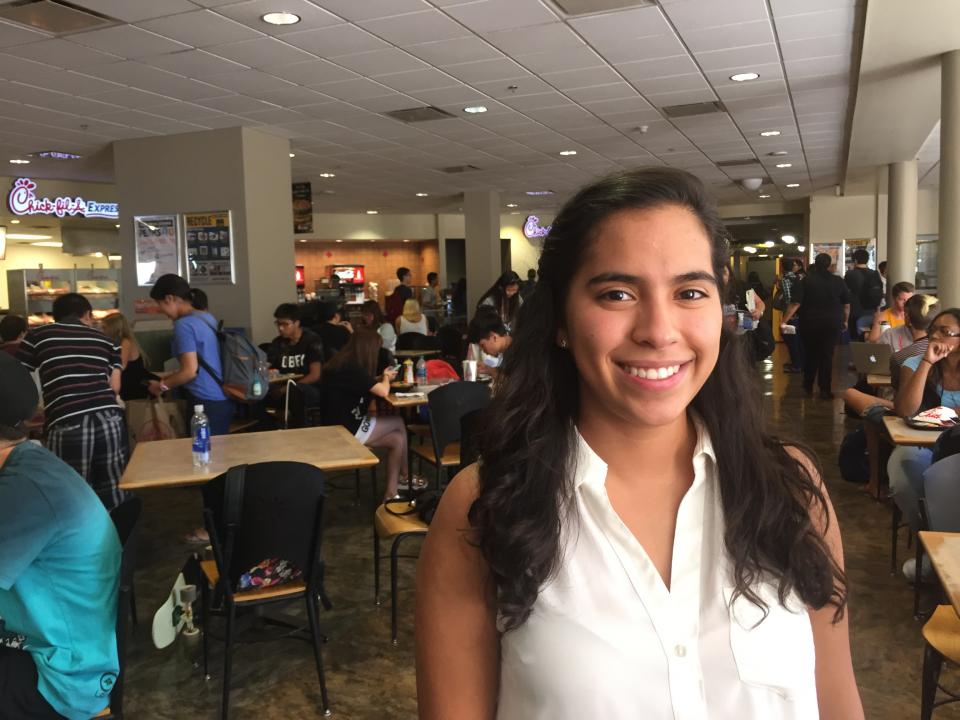 Maria Jose Quezada chose to come to ASU from Mexico City because she liked how the university has a hands-on approach for engineering majors and because it is a quick four-hour plane trip home.

“You think, ‘they don’t like me,’ said Quezada. “But it’s just a different culture. Americans are a little bit colder.”

Xin Zhou is the coordinator for international student engagement at ASU, and she also advises the Coalition of International Students.

“Our priority is to integrate the students into university life,” she said.

Of the 9,800 international undergraduate and graduate students, more than a third are from China with about 23 percent from India.

The coalition holds social activities throughout the year, including a cricket tournament and a trip to the Arizona Snowbowl ski resort in Flagstaff, as well as cultural events like a Lunar New Year celebration and practical events such as a career conference.

“A lot of international students have challenges finding internships or jobs in the U.S.,” Zhou said. “We have recruiters and immigration attorneys who can help,” Zhou said.

And the group helps the students connect to others like them.

Quezada, a junior bioengineering major, is a student at Barrett, the Honors College, where she’s found a supportive community.

For one of her Barrett classes, she created a video project in which she interviewed several international students. Her video captured the disorientation they can feel and also the confidence they’ve developed in navigating a new world.

“That helped me realize why I’m here and all of the challenges international students face,” she said.

“And that we all go through the same stuff — food, clothing, the weather.”