ASU Law No. 1 in state for bar passage

ASU’s Sandra Day O’Connor College of Law is once again No. 1 in Arizona for bar passage. Its graduates also placed first and tied for second on the latest bar exam.

ASU Law graduate Kyle Thomas Orne scored the highest on the exam, while his fellow graduates Robert Andrew Clarke and Christopher Jacob Waznik tied for second. All three graduated in May 2015.

“I was very surprised to have the top score — I’m not going to lie,” said Orne, who works as an associate in the Phoenix offices of Quarles & Brady. “Much of the bar exam focuses on what you learn as a 1L (first year). The ASU Law professors I had as a 1L were all really good, and I felt that I was prepared for the exam.”

Orne was also pleasantly surprised to learn that his former classmates tied for second place. “It looks like we studied together, but we didn’t,” he joked.

Among all bar exam test takers, ASU Law had a passage rate of 81.8 percent, far above the state average of 56.6 percent.

ASU Law ranks No. 14 among all law schools and No. 5 among public law schools in placing graduates in real lawyer jobs. Within 10 months of graduation, 87 percent of ASU Law's Class of 2014 graduates found employment in long-term, full-time positions where bar passage is required or a Juris Doctor (JD) is preferred. The national employment average is 71 percent, according to data collected by the American Bar Association (ABA) on the nation’s 204 ABA-accredited law schools.

Jordan Young grew up in Cave Creek as part of the area’s flourishing youth hockey scene, dreaming of one day lacing up his skates as part of a Division 1 collegiate squad.But like most hockey-obsessed kids in the Valley, he was resigned to the fact that this dream would, likely, never happen in his home state.Fast-forward a decade or so and Young is part of something that once seemed impossible:...

Investigating the mechanics of materials at the smallest scale 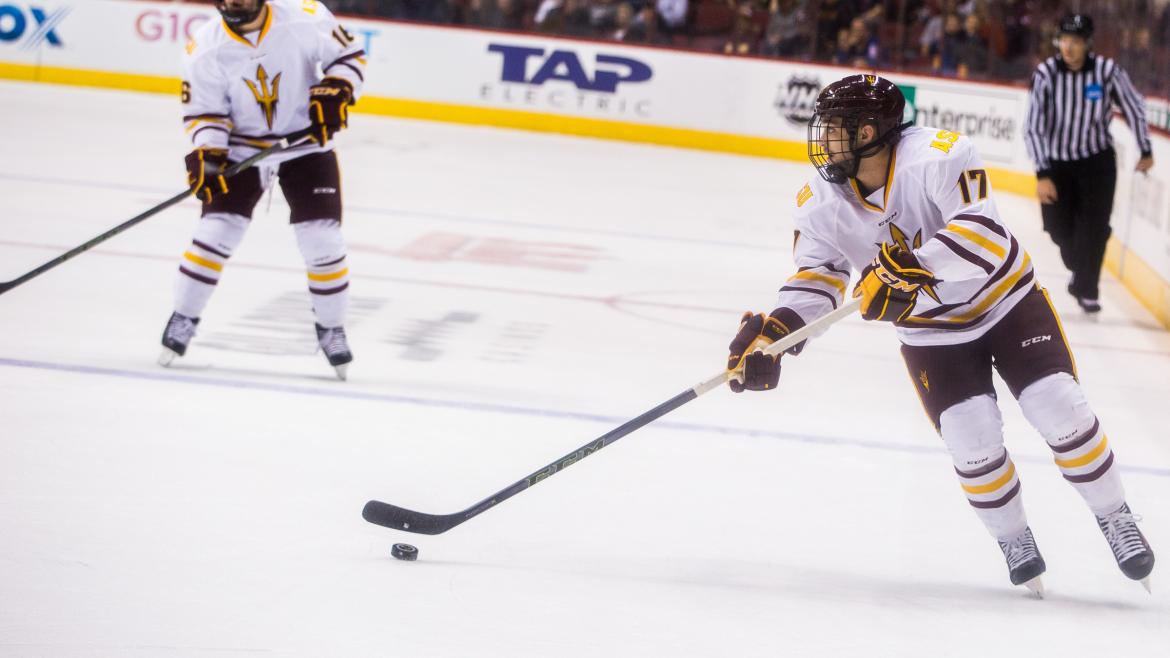 After years as a club-level squad, ASU's hockey team makes its debut as a varsity sport

Jordan Young grew up in Cave Creek as part of the area’s flourishing youth hockey scene, dreaming of one day lacing up his skates as part of a Division 1 collegiate squad.

But like most hockey-obsessed kids in the Valley, he was resigned to the fact that this dream would, likely, never happen in his home state.

Fast-forward a decade or so and Young is part of something that once seemed impossible: He’s a member of Arizona State University’s first varsity hockey team.

“I was hoping I would get to this level, but back then I didn’t expect it in Arizona,” said Young, one of five Arizona players on the 32-man roster. “It’s a dream come true.”

The move comes after years of watching ASU’s club hockey team build a following and a model of successASU won the club team national championship in 2014, when it was part of the American Collegiate Hockey Association. — and after a $34 million private donation provided financial fuel.

“I knew the club team was getting better and better, but it seemed pretty far off that they would make the jump to Division 1,” said Drew Newmeyer, a junior from Scottsdale.

The funding, which will also allow ASU to develop two additional women’s sports teams, was announced last year. Less than 12 months later, ASU has become the 60th men’s hockey team in the top division of the National Collegiate Athletic Association. 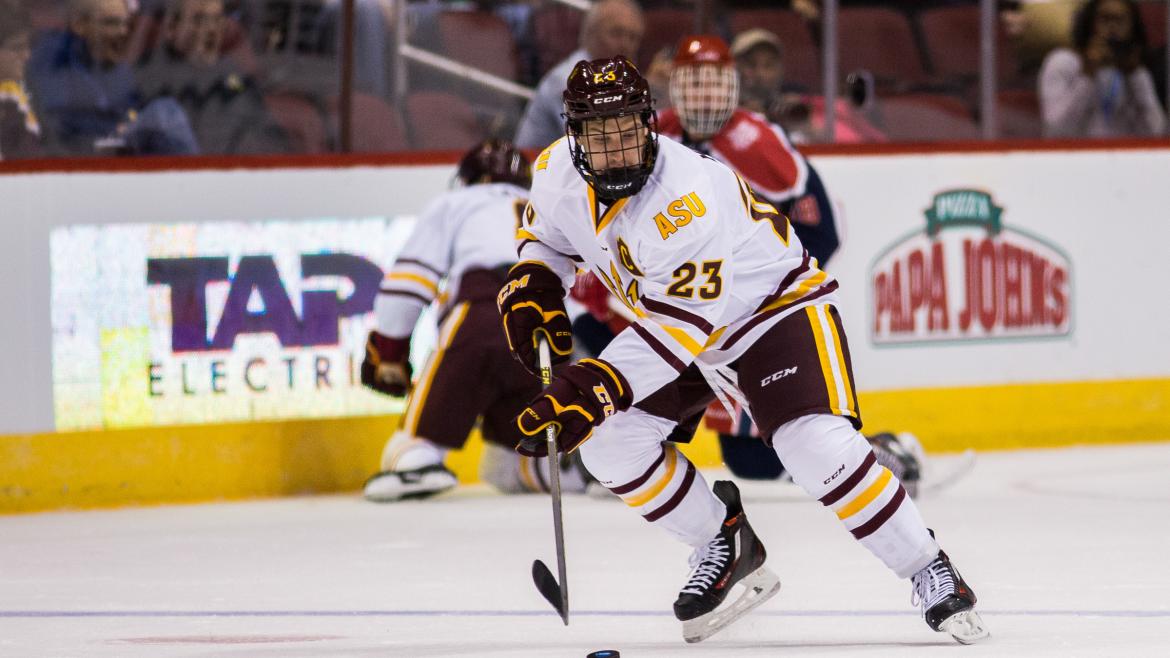 “It’s a matter of everyone getting rewarded for all the hard work they put in,” said Young, one of the team’s three captains. “It felt perfect that it happened at the right time.”

ASU will play 11 home games at Tempe's Oceanside Ice Arena and three games at Gila River Arena in Glendale, home of the Arizona Coyotes NHL team. ASU’s first game, an exhibition Oct. 3 in which they defeated the University of Arizona’s club team 8-1, was at Gila River.

Both Young and Newmeyer came to ASU’s club team after playing on local club teams and in the United States Hockey League, a premier league for players who are 20 years old and younger.

Now that they’re varsity, Young said many things on the ASU team are “amped up.”

“The preseason, the film, the hard work lifting weights, the mental preparation, everything is different,” he said.

“We’re working out four days a week at 6:30 a.m. in the gym. Last year, it was work out on your own, hold yourself accountable and be in game shape.”

Newmeyer said the heightened attention is one difference.

“Everything is way elevated from where it was before,” he said. “There are really good trainers and medical staff.”

Coach Greg Powers said that Arizona will be a prime recruiting area for the team. Youth hockey has been growing in Arizona, with membership in the USA Hockey organization nearly doubling in the past decade, to about 7,400.

“We want to make sure that the best Arizona kids stay in Arizona and play for ASU,” he said. “It’s a priority.”

ASU’s other local players are Edward McGovern of Scottsdale, Anthony Croston of Phoenix and Cody Gylling of Chandler.

But while young Arizona players can now stay in state to play Division 1 hockey, only a few will make it.

“They have to be an elite player,” Powers said. “We’re not going to take someone just because they’re from Arizona.

“But we are starting to produce some really elite players in this state.”

And now they can stay here to pursue their sport and their education. University of Arizona's defenders and goalies watch as Arizona State University tries to secure yet another goal during the team's first game as an official NCAA sport at Gila River Arena on Oct. 3. Freshman forward Ryan Stevens goes for the puck against University of Arizona defender Nick Zellmer during the ASU hockey team's first win as an official NCAA sport at Gila River Arena on Oct. 3. 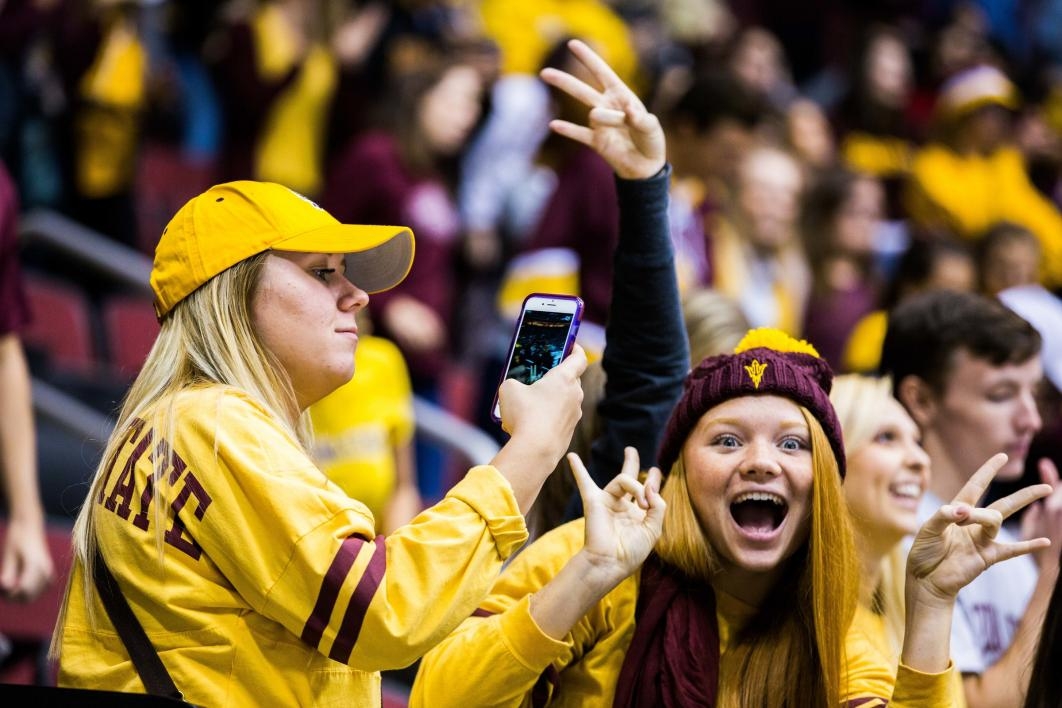 Arizona State University freshman forward Jack Rowe scores the third goal of the evening during the team's first win as a NCAA sport on Oct. 3.