Patricia Williams was 19 years old when her mother was seen getting into a car near the intersection of 21st and Campbell avenues in Phoenix, on Nov. 25, 1993. She has never been seen again.

Officials estimate that more than 600,000 people are reported missing nationwide every year. 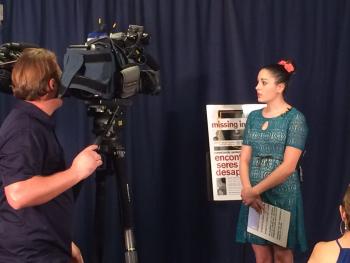 Kimber Biggs, whose sister Mikelle is still missing after disappearing in 1999 at age 11 while waiting for an ice-cream truck, speaks at a press conference about the grief, confusion and unwillingness to give up on finding a missing loved one. She plans to participate in Missing in Arizona on Oct. 24 on ASU's West campus. Photo by: Phoenix Police Department Download Full Image

That statistic inspired Robbin Brooks, a lecturer in Arizona State University’s School of Criminology and Criminal Justice, to begin a collaboration to stage Missing in Arizona, an event dedicated to connecting people with the resources to find their long-term missing loved ones.

The event, to be held Oct. 24 at ASU's West campus, is the result of a partnership between the School of Criminology and Criminal Justice in ASU’s College of Public Service and Community Solutions, the City of Phoenix Police Department and Maricopa County.

Missing In Arizona is open to the public. Families of the missing are encouraged to attend to access help from law enforcement as well as share identifiers such as dental records, fingerprints and photographs that can be instrumental in solving cases. Support groups and private meetings will also be available to help families cope.

Similar events have yielded successes in other states. In Michigan, a similar event held for the last four years has resolved more than 50 cases, some dating back to the 1970s. This will be the first "Missing In ..." event held in Arizona.

“ASU’s participation in the event forms a link between society, law enforcement and social services,” Brooks said. “This event provides a great educational opportunity for students and educators who will be working side-by-side with law enforcement in gathering important information from families for the investigators.”

Stuart Somershoe, who has been involved with Phoenix Police’s missing-persons unit since 2007, and Christen Eggers, medicolegal death investigator for the Office of the Medical Examiner of Maricopa County, report that there are more than 2,000 people on the National Crime Information Center’s missing list in Arizona alone. They say that number could be higher due to many cases being mishandled or never investigated at all.

Somershoe also acknowledged that some families fear reporting a missing person due to possible illegal-immigrant or criminal status. He assured them that this event is not about prosecuting people.

“Everyone has somebody who cares for them, loves them and wants to know what happened to them,” he said. “That’s part of the reason why we’re having it at ASU: We want to have a safe, non-law-enforcing environment, where people can come forward and we can help them.”

Friends and families of missing persons will be able to file reports on site, and they are also encouraged to bring medical and dental records of the missing individual, as there are many undocumented persons in the Maricopa County system.

“All of our unidentified information, demographic information does still get uploaded,” Eggers said. “A lot of people just don’t come forward when they have a missing person, so we don’t have the information to do a comparison with.”

But perhaps the most important aspect of the event will be the outreach and support groups that will be offered to family members.

Williams plans to attend Missing in Arizona with hopes of getting new information about her mother, but she also would like to help those who are going through the same thing.

“I was so young, I didn’t know anything except the tools she gave me, be strong, be a fighter, that’s how she raised me,” Williams said. “I hope to be that example to show people that you can live through the pain, and still keep the spirit and the memory of loved ones alive.”

Missing in Arizona will run from 10 a.m. to 4 p.m. Oct. 24, at the ASU West campus, 4701 W. Thunderbird Road, in Glendale. For reservations and more information, contact Detective Stuart Somershoe at 602-261-8065 or stuart.somershoe@phoenix.gov.

A new view of the classic 'Streetcar'

Wyatt Kent is quite aware of the difficulties in producing a classic play and the expectations that follow, especially one that also made it big in Hollywood.But this master's in directing student in ASU’s School of Film, Dance and Theatre doesn’t shy away from a challenge. Even when that classic work is the iconic “A Streetcar Named Desire.”The play, which opens Friday as part of the scho... 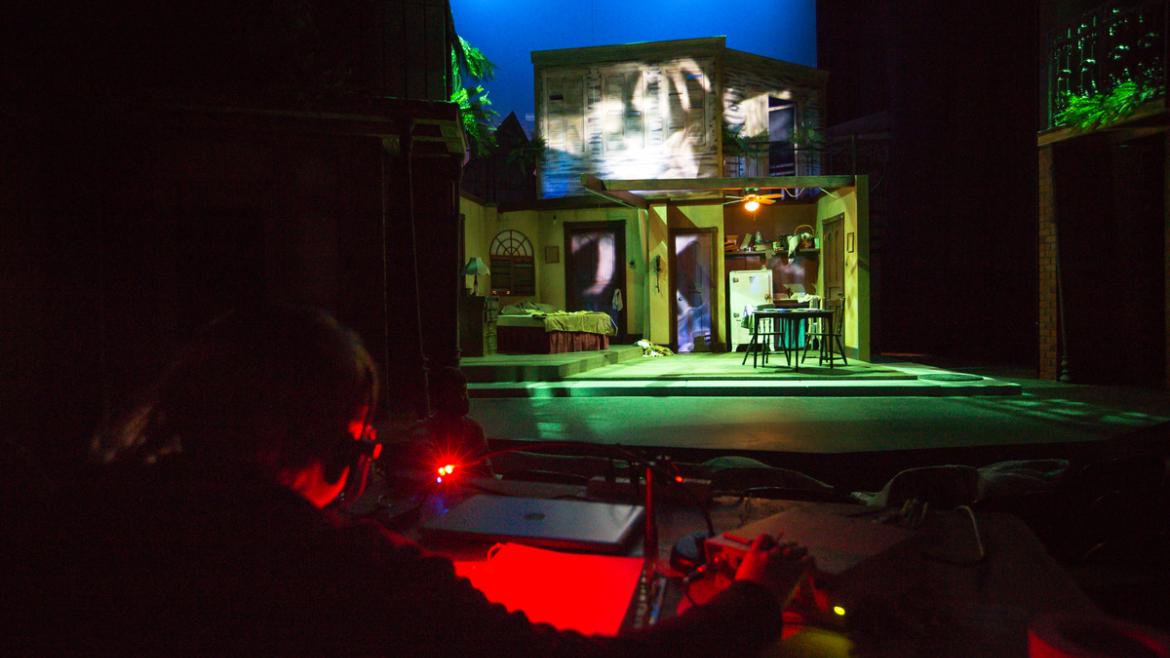 A new view of the classic 'Streetcar'

Wyatt Kent is quite aware of the difficulties in producing a classic play and the expectations that follow, especially one that also made it big in Hollywood.

But this master's in directing student in ASU’s School of Film, Dance and Theatre doesn’t shy away from a challenge. Even when that classic work is the iconic “A Streetcar Named Desire.”

The play, which opens Friday as part of the school’s 2015-2016 MainStage season, tells the story of Blanche DuBois, a southern belle who moves in with her sister and brother-in-law in a small New Orleans apartment to escape financial ruin. Conflict ensues as the three characters navigate their individual dramas and the physically restricting space of the apartment.

Written by Tennessee Williams in the 1940s, the play is considered an essential piece of the American literary canon.

“One of the things I find exciting is taking plays that people feel like they know and engaging with them from the ground up,” said Kent, who is directing “Streetcar.” 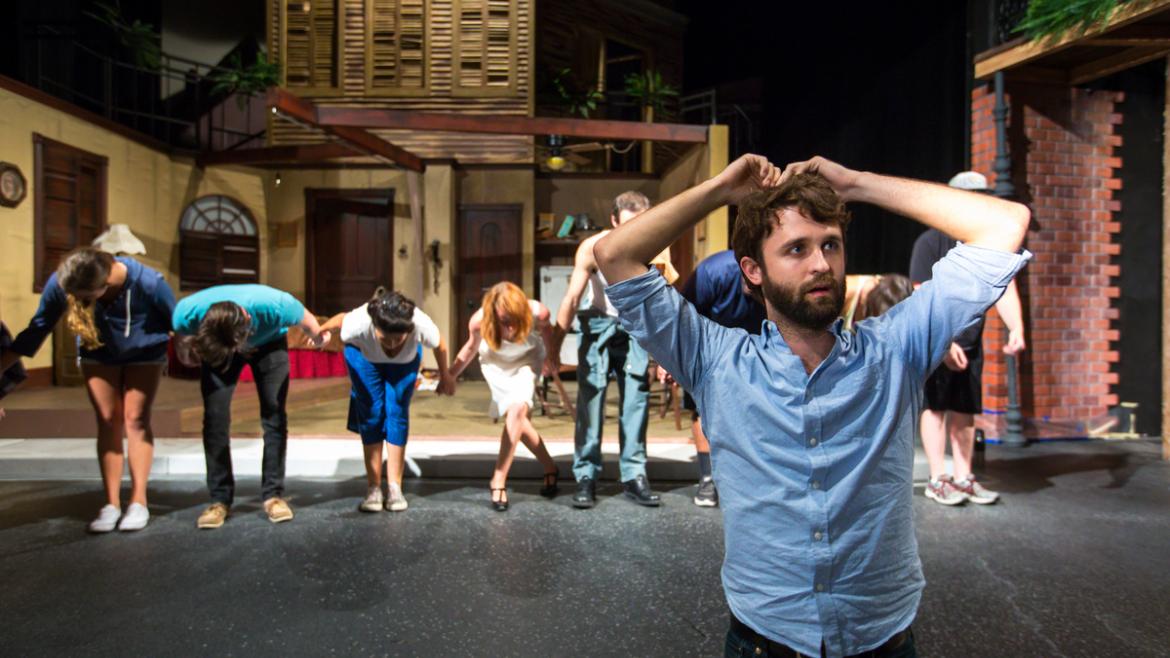 Director Wyatt Kent checks with a stage hand
during a rehearsal of Tennessee Williams’
“A Streetcar Named Desire” at ASU's Lyceum
Theatre, on Wednesday, Oct. 14.

Michael Bateman, a master's in interdisciplinary digital media and performance student and the show’s media designer, took an understated approach to the design, which will primarily involve projecting imagery onto set pieces, while taking cues from Williams’ original words.

“When you hear about ‘A Streetcar Named Desire’ you might think about standard American drama in a box set sort of space, but Tennessee Williams really writes poetry in his script,” said Bateman. “He talks about these lurid shadowy reflections on the wall that engulf Blanche in their horror, and that’s all in the script. These very vivid images written by Williams typically don’t get addressed in most productions, where her psyche is fracturing and reality around her is breaking. We are using media to show that reality fracturing around her, especially later in the script when she is really breaking down.”

For Vickie Hall, the master's in performance student who plays Blanche, the media design is an exciting element, but the story itself still has a very real relevance today.

“Theater is a living, breathing thing,” said Hall. “What’s amazing about our craft is that you can reach back and find a play from the ’40s and there are still themes and situations in the play that are just as relevant to us now.”

Hall mentions universal concerns, like identity and societal pressures, as keys to this work, but she says that the text retains importance on a more literal level as well.

“Blanche is a bit of a racist so there is that element of the culture that is in her; that’s how she grew up, that’s how she knows how to interact with the world. And I think that’s still absolutely going on today, and it’s something that needs to be addressed,” Hall said. “Theater can address those things through story form. Sometimes I think that’s how we learn best.”

Lance Gharavi, assistant director of theater and creative director of the MainStage theater season, says that the impulse to do this work really came from the student body. The cast, director and designers for the show are all current students at ASU.

“I was hearing from a lot of students a desire (if you will) to wrestle with a big, important, monumental work, a classic that has endured the tests of time,” Gharavi said. “There are few U.S. playwrights, very few works of U.S. theatre that carry more gravity than Williams or ‘Streetcar.’ I was excited by the prospect of opening a season with this work. And, of course, we’re closing our season with the world premiere of a new play. The old and the new bookend our season. I’m thrilled to give audiences a glimpse into the brutal, sexy and unforgettable world that Williams created. There’s a reason it’s a classic. “

“ ‘Streetcar’ is terrifying, it’s a monster,” Kent said. “It’s a long play full of complicated questions and no simple answers. I feel really lucky to get to engage with those things at ASU.”

“A Streetcar Named Desire” will be on view at the Lyceum Theatre, 901 S. Forest Mall on ASU’s Tempe campus: 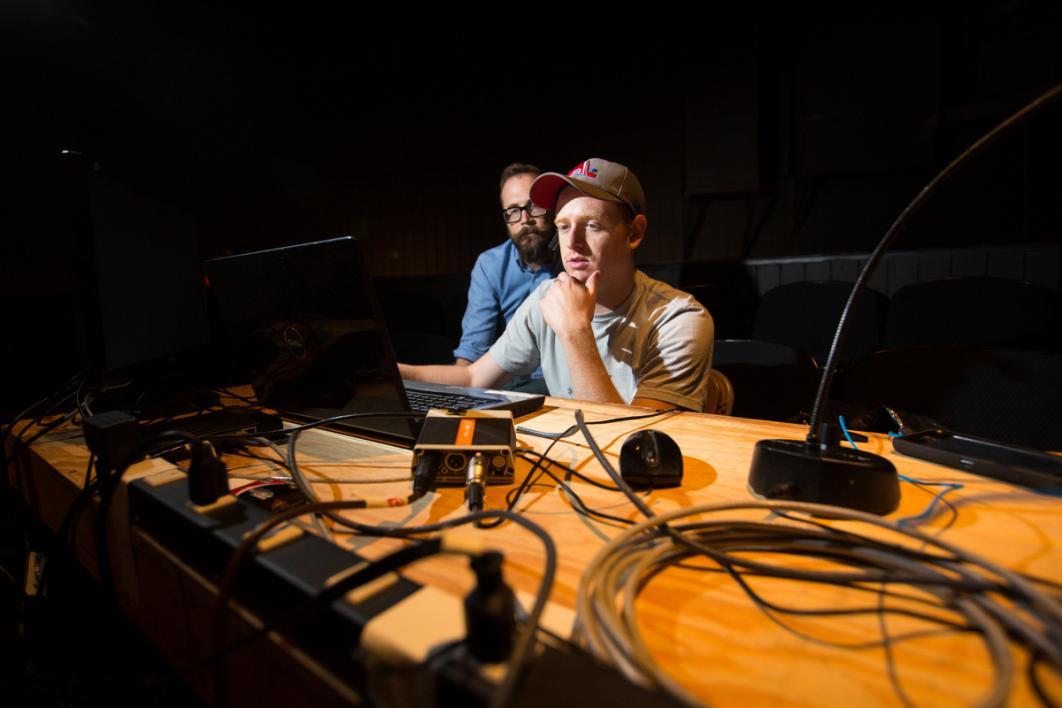 Michael Bateman (right) and Boyd Branch work on the media effects before a rehearsal of Tennessee Williams’ “A Streetcar Named Desire” at the Lyceum Theatre, on Wednesday, Oct. 14. Bateman is working on an master's in media design. Branch is an assistant professor in ASU's School of Film, Dance and Theatre. 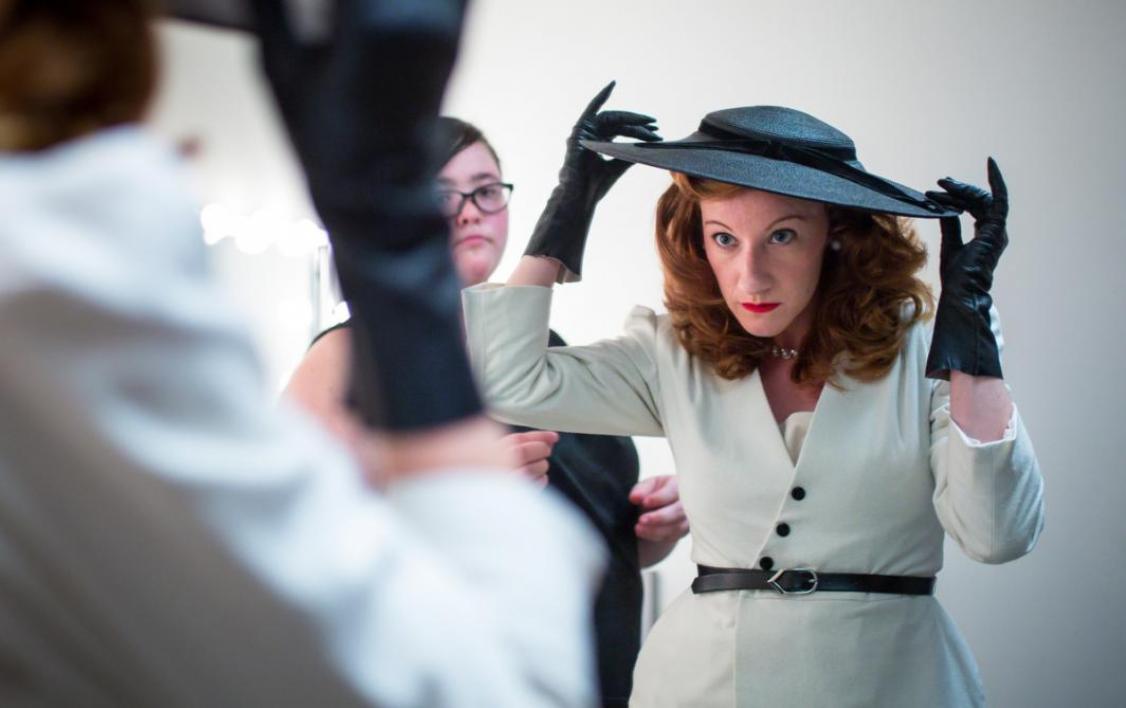 Vickie Hall, adjusts her hat while preparing to play Blanche DuBois before a rehearsal of Tennessee Williams’ “A Streetcar Named Desire” at the Lyceum Theatre, on Wednesday, Oct. 14. Katie West, a costuming junior, assists her. Hall is a working on her master's in theater performance. 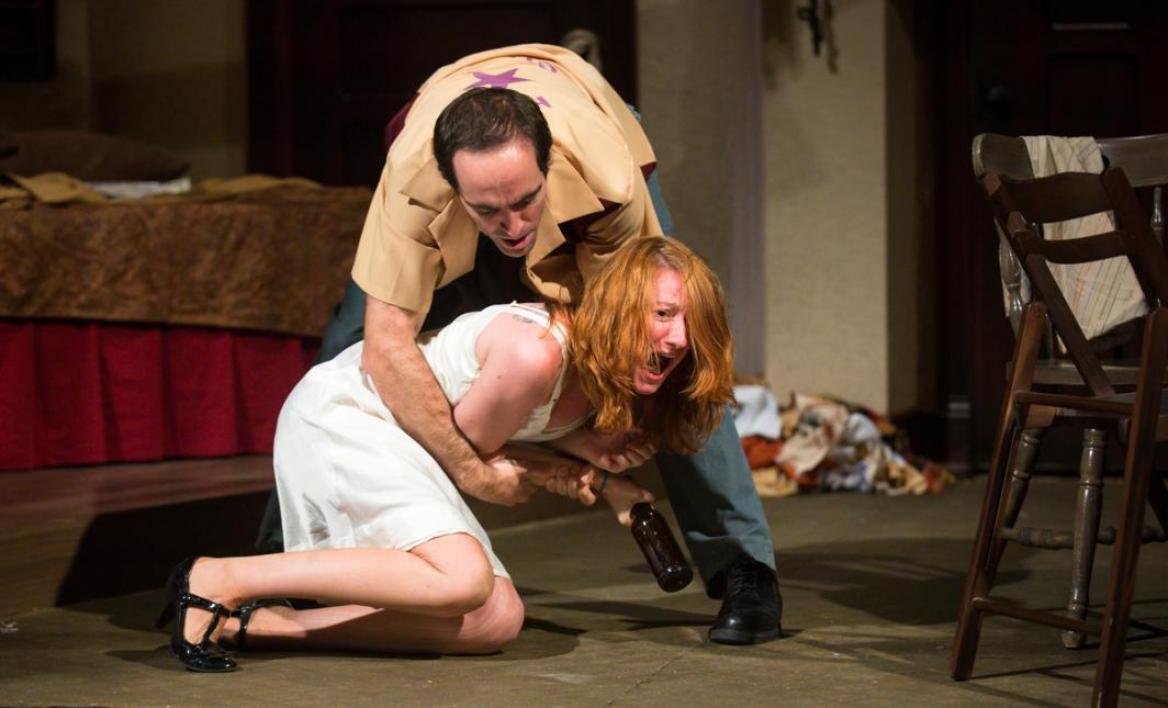 Vickie Hall, as the iconic Blanche DuBois, fights with Mike Largent, as Stanley Kowalski, during a rehearsal of Tennessee Williams’ “A Streetcar Named Desire” at the Lyceum Theatre, on Wednesday, Oct. 14. The actors are second year maste'rs students in theater performance.