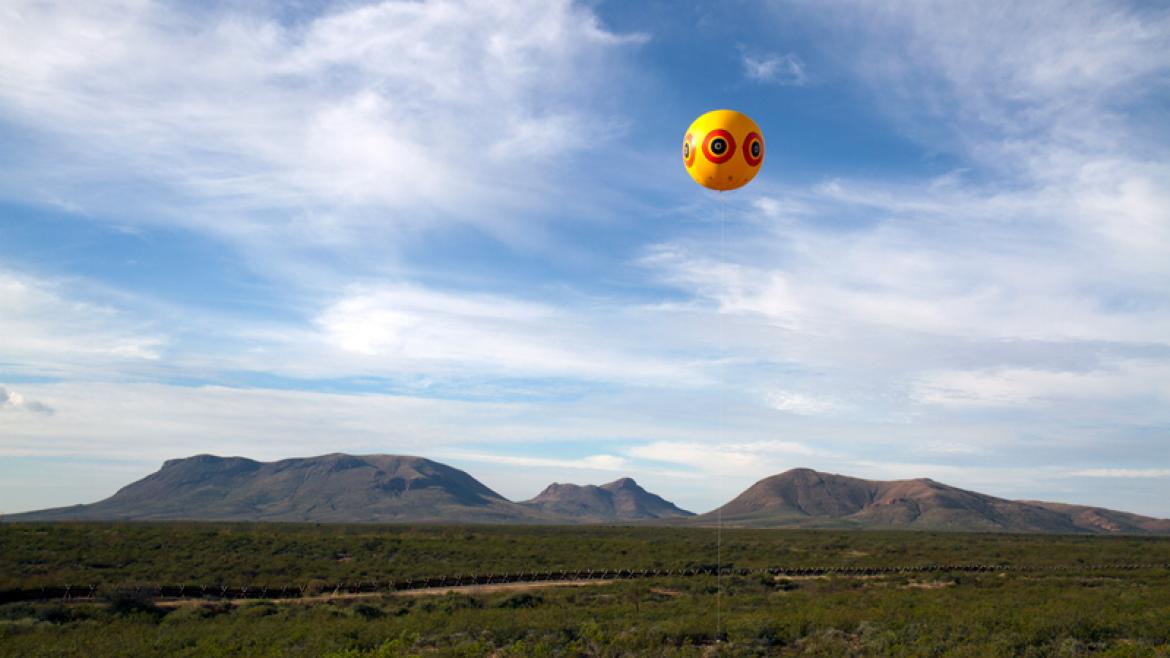 This week, three members of an indigenous artist collective called Postcommodity will install the largest-ever bi-national land art piece on the U.S.-Mexico border.

The "Repellent Fence" is comprised of more than two dozen massive balloons — each 10 feet in diameter — that will float 50 feet above the desert landscape. Together, they will create a temporary two-mile-long sculpture that intersects the U.S.-Mexico border.

The installation is the product of over three years of work by Postcommodity members Raven Chacon, Cristóbal Martínez and Kade L. Twist, who have been in residence at the ASU Art Museum’s International Artist Residency Program several times as they worked to realize their vision for the installation.

Their fence, which the group calls the “continuation of an exploration of contested spaces,” will be installed through community action from Oct. 9-12, near Douglas, Arizona, and Agua Prieta, Mexico.

The balloons are scaled-up replicas of “scare eye” spheres, a consumer product designed to repel birds. Postcommodity notes that the “scare eye,” which looks similar to a yellow and red bull’s-eye target, actually “utilizes iconography and traditional medicinal colors used for thousands of years by indigenous peoples from South America to Canada.”

Through appropriating that iconography in their project, the collective hopes to open a dialogue about indigenous cultural relationships to land, and to “demonstrate the interconnectedness of the Western Hemisphere by recognizing indigenous peoples and long-view histories that encapsulate migration, trade, relationships, communication and cultural exchange.”

Twist and Martinez are both ASU alums. Twist received a Master of Fine Arts from the ASU School of Art, and Martinez received a doctorate in rhetoric, composition and linguistics from the Department of English in the College of Liberal Arts and Sciences in 2015, after completing a master’s in media arts and science and bachelor’s degrees in studio art and painting, in the Herberger Institute’s School of Arts, Media + Engineering and School of Art, respectively.

They’re also not strangers to international art fame. In 2012, they, along with the rest of Postcommodity, exhibited at the 18th Sydney Biennale. The project they presented, “Do You Remember When,” was commissioned by the ASU Art Museum and originally unveiled at the museum’s Ceramics Research Center in 2009.

To make “Repellent Fence” a reality, Postcommodity conducted dozens of meetings with individuals, communities and local organizations to acquire permission to stage the installation and to ensure safe public access for audiences viewing the project, which will be installed on public and private land in Mexico and Arizona. They chose to work outside the framework of arts institutions and galleries to emphasize the power of international collaboration and the desire of border cities to “redefine dialogue.”

Their involvement with the museum's residency program was also part of the installation's development.

“The residency program has been amazing — it’s comfortable, well-appointed, right in the middle of Phoenix, and surrounded by a generative and talented art community. It’s an ideal home base to realize a project,” says Twist. “All of the resources that the museum and its staff leverage on behalf of the artists have brought so much to the table. I can’t even begin to explain how important this residency has been in terms of realizing the ‘Repellent Fence.’”

"Repellent Fence" is just one part of a larger public engagement campaign that will include public programming, performances and the first-ever cross-border art walk in Douglas and Agua Prieta. Over the course of the weekend, the Arizona Commission on the Arts will present a series of artist workshops and artist-led community conversations featuring several artists local to Douglas, including ASU School of Art alumna M. Jenea Sanchez, as part of their new AZ ArtWorker Initiative. Visual and performance artist Ana Teresa Fernández will also be visiting Douglas as part of her residency with ASU’s Performance in the Borderlands, an initiative of the ASU School of Film, Dance and Theatre.

With just days remaining before “Repellent Fence” is installed at the border, the group is excited. “The installation itself is significant, because it is a large-scale manifestation of intense bi-national dialogue, collaboration and diplomacy,” Martinez says. “This represents the self-determination of Douglas and Agua Prieta to collaborate with one another and unify their communities despite the border wall.”

“This act of re-inhabiting historically shared terrain and marking it with contemporary versions of ancient icons reveals the U.S./Mexico border to be what it is: the arbitrary and artificial overlay of power derived through coercion,” says Gordon Knox, ASU Art Museum director. “I am delighted that the museum’s residency program can serve as a springboard for artists of Postcommodity’s caliber and enable cross-disciplinary projects like ‘Repellent Fence.’”

“Repellent Fence” is presented in collaboration with the ASU Art Museum and is supported by Creative Capital, Native Arts and Cultures Foundation, Joan Mitchell Foundation and Art Matters.

The public is invited to attend “Repellent Fence” and the surrounding programming, Oct. 9-12, in Douglas and Agua Prieta. A full schedule of events and more details on the project are available at repellentfence.com.

A ProPublica story that uncovered the shocking ways children with intellectual disabilities are physically disciplined in schools across the country has won top honors in the 2015 Katherine Schneider Journalism Award for Excellence in Reporting on Disability.The National Center on Disability and Journalism (NCDJ) is at Arizona State University’s Walter Cronkite School of Journalism and Mass Comm...

A ProPublica story that uncovered the shocking ways children with intellectual disabilities are physically disciplined in schools across the country has won top honors in the 2015 Katherine Schneider Journalism Award for Excellence in Reporting on Disability.

The National Center on Disability and Journalism (NCDJ) is at Arizona State University’s Walter Cronkite School of Journalism and Mass Communication. It was created in 2013 under a grant from Katherine Schneider, a retired clinical psychologist who has been blind since birth and who also supports the national Schneider Family Book Awards. 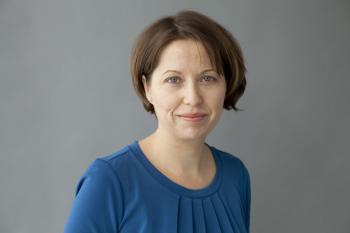 ProPublica reporter Heather Vogell is the recipient of the 2015 Katherine Schneider Journalism Award for Excellence in Reporting on Disability. Photo by: Walter Cronkite School of Journalism and Mass Communication Download Full Image

This year’s second place award went to the Hartford Courant for a story that profiled a mother and her son, who has autism. Judges awarded third place to North Carolina Public Radio, WUNC-FM, for a multimedia piece examining the fallout of a state-sponsored eugenics program.

ProPublica reporter Heather Vogell’s first-place story, “Violent and Legal: The Shocking Ways School Kids are Being Pinned Down, Isolated Against Their Will,” profiled Carson Luke, a young boy with autism who sustained broken bones after educators grabbed him and tried to force him into a “scream room.” The story underscored the practice of educators secluding and physically restraining uncooperative school children hundreds of thousands of times a year, sometimes with straps, handcuffs, bungee cords or even duct tape.

“Heather Vogell’s story met my ultimate test: I never had read before that students face dangerous restraints 267,000 times a year,” said Schneider Award judge Jerry Ceppos, dean of Louisiana State University’s Manship School of Mass Communication. “No one else ever has assembled the massive dataset required to determine that number. For that alone, this was distinguished reporting. But Heather’s story didn’t rely just on data. She blended vignettes with the data so that the story read like a drama.”

“Violent and Legal” was one of more than a dozen stories produced by Vogell and Annie Waldman that examined seclusion and restraint practices in schools.

“We are deeply honored to receive the Katherine Schneider Journalism Award for Excellence in Reporting on Disability and want to thank the judges for recognizing our work,” Vogell said. “I am glad media coverage including ours has helped push conversations about restraints out of the dark place where they have long been hidden and into the open.”

Contest judges awarded second place to Josh Kovner, a reporter at the Hartford Courant in Connecticut, for “Saving Evan: A Mother and Son Navigate the Challenges of Treating Autism.” The in-depth story profiled Carol Marcantonio’s journey to help her 11-year-old autistic son become independent when he reaches adulthood. Kovner won a $1,500 prize for the story.

“The boy, Evan, could break your heart, and the mom’s journey resonated with many parents,” Kovner said. “People were saying, ‘That’s what happened to me.’”

Radio producer Eric Mennel took third place for a North Carolina Public Radio story, “Why Some NC Sterilization Victims Won't Get Share of $10 Million Fund.” Mennel won a $500 prize for a story profiling Debra Blackmon, an intellectually disabled woman who was sterilized at age 14 in 1972 as part of a state-sponsored eugenics program in North Carolina.

This year’s judges included Ceppos as well as Leon Dash, a Pulitzer Prize-winning reporter and journalism professor at the University of Illinois; Jennifer LaFleur, a senior editor at the Center for Investigative Reporting; and Jennifer Longdon, a disability rights advocate and former chair of the Phoenix Mayor’s Commission on Disability Issues.

In 2013, the inaugural Schneider award went to Ryan Gabrielson of California Watch, part of the Center for Investigative Reporting, for a series exposing the routine failure on the part of police to protect the developmentally disabled at California care institutions. Last year, Dan Barry of The New York Times won the award along with colleagues Kassie Bracken and Nicole Bengiveno for an in-depth story examining the lives of disabled men who worked in vile conditions for decades in an Iowa turkey plant.

According to NCDJ Director Kristin Gilger, who is the associate dean of the Cronkite School, the Schneider Awards aim to set a new standard for reporting on disability issues.

“The Schneider Awards have become an important nationally recognized honor in a remarkably short period of time,” Gilger said. “I’m convinced by shining a light on this outstanding journalism, this outstanding contest is promoting more and better coverage of the disabled and disability issues.”

Vogell will accept the award and a $5,000 cash prize on behalf of ProPublica Nov. 30 at the Cronkite School, where she will deliver a talk on her work to students, faculty and the public. The discussion, part of the school’s "Must See Mondays" lecture series, will be held at 7 p.m. in the school’s First Amendment forum. It is free of charge and open to the public.