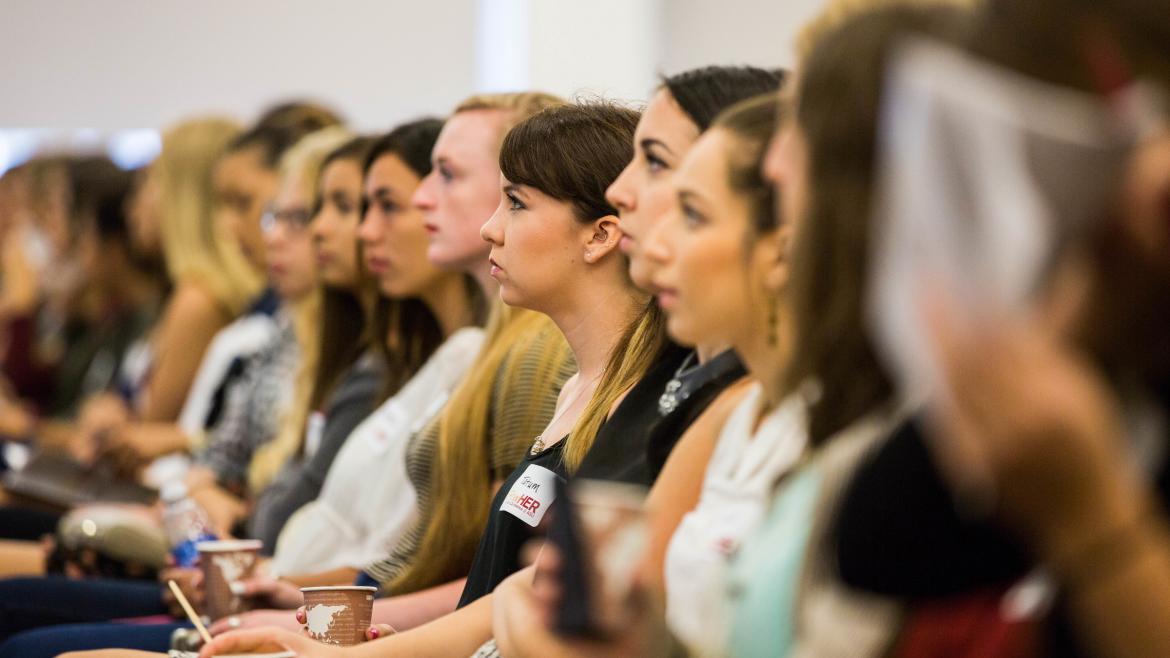 That was one of four strategies for success shared by Tish Norman, keynote speaker at the inaugural PowHER Women’s Conference held Sunday at Arizona State University.

The event, organized by five ASU Panhellenic sorority members, aimed to inspire young women with the confidence and habits that would serve them well in college and beyond — while also acknowledging that although strides have been made in female empowerment, there is still work to do.

“A lot of women are really graduating not knowing that a lot of things have not changed,” said conference speaker Dale Kalika, senior lecturer at ASU's W. P. Carey School of Business.

Kalika, who spoke about the challenges Millennial women face in the workplace, said women need to be empowered to become change agents — both to change their opportunities and to change today’s organizational culture.

Speakers at the conference ranged from business experts, such as Kalika, to marketing managers to academic professionals. The event, though organized by sororities, was open to all.

Norman, executive director of leadership-development company Transforming Leaders Now, discussed how to prepare for success and how to maximize life.

“You are living in a very special time where you can be more, learn more, serve more, give more, have more, help more, read more, sing more, dance more, write more and be more,” Norman said.

Beyond being legendary — that is, making your mark, she challenged the audience to adopt three other strategies for achieving goals: Do the work; be strategic with your friends (surround yourself with people who want to achieve great things and improve themselves); and find a mentor.

“I think it’s great that there is something like this,” said conference-goer and ASU junior Alyssa Tufts, who is majoring in journalism and mass communication. “That way women can start, especially in college, they can start building leadership skills and getting into those roles at an organization, at an internship, at a job.

More than 250 women attended the conference at the Memorial Union ASU's Tempe campus and heard sessions on topics ranging from stress management to leadership to confidence.

Marlene Tromp, dean of ASU’s New College of Interdisciplinary Arts and Sciences, told attendees that although women have come a long way there are many cultural attitudes that still need to change. By no fault of their own, people have no conscious awareness of their implicit biases, she said.

In her lecture, “Why You (Yes, You) Should Be President,” Tromp focused on social expectations that people have about women in leadership and why women should care. She laid out the challenges women face, dared the audience to think in new ways and taught them how to change gender expectations.

“There are all these double binds, there are all these challenges, and we know that one of the things that stops women from being in successful leadership positions, one of the biggest factors is what they think about themselves,” said Tromp, who is also vice provost of ASU's West campus and a professor of English and women's and gender studies.

She talked about what can be learned from research to overcome sexism, including persisting in the face of setbacks and embracing challenges.

“If you let your fear making those mistakes drive you, you won’t take those risks,” Tromp said. “You won’t accept those challenges.”

The days' overarching theme was learning to understand the stereotypes and expectations people have of women. Once recognized, the goal is to help women break those stereotypes and teach them how to succeed.

“Women can make an impact on many different scales," said Jasmine McAvan, business law and business management major and PowHER Conference committee chair. "If they can directly take a message from a particular speaker and better themselves through their personal lives or spread their willpower to improving their communities — our goal of the conference is accomplished.”

It’s a problem we can all relate to.“Imagine a day where you have to shuttle between meetings and after every meeting, you have to come back into a heated car which will bake you like a cookie,” said Sneha Shenoy.And the Arizona State University student has a potential remedy we can all appreciate.“Our solution is a sleek, simple and easy-to-install cooling pad which will keep your car coo...

Barrett, The Honors College , School of Politics and Global Studies , The College of Liberal Arts and Sciences , Office of National Scholarship Advisement 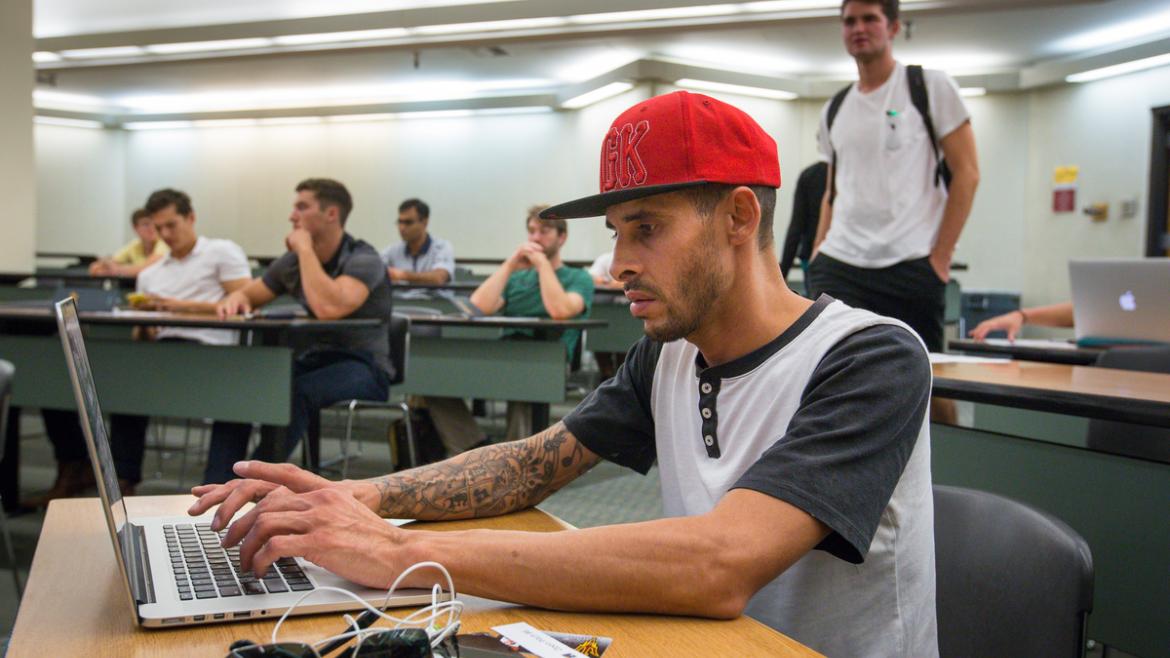 It’s a problem we can all relate to.

“Imagine a day where you have to shuttle between meetings and after every meeting, you have to come back into a heated car which will bake you like a cookie,” said Sneha Shenoy.

And the Arizona State University student has a potential remedy we can all appreciate.

“Our solution is a sleek, simple and easy-to-install cooling pad which will keep your car cool when it’s parked,” said Shenoy, who invented the yoga-mat-type device with her fellow student, Subbarao Raikar. They are graduate students studying materials engineering.

Confident and enthusiastic, Shenoy described her product at the front of a lecture hall filled with people, including those who wondered why this cooling pad should replace the sun screens seen in so many Arizona car windows.

“Why you would buy our product is that the covering you’re using now is just delaying the time of heating. It’s not cooling your car. We do that for you,” Shenoy said.

She was among a dozen students who practiced selling their ideas during Launch Days Open Pitch, an event on the Tempe campus sponsored by ASU’s Office of Entrepreneurship and Innovation.

Launch Days is meant to encourage students to drop their fears and inhibitions about their entrepreneurial projects and “just start” – the event’s motto. Three more Launch Days will be held at ASU’s other campuses this month, including Thursday at the West Campus, with Open Pitch beginning at 5 p.m.

“Our vision is that entrepreneurship is as much a skill set and a way of thinking as a vocation,” said Garrett Westlake, associate dean of student entrepreneurship. “Students tend to shy away from the word ‘entrepreneur,’ but when you talk to them, they’re all working on something that they’re excited about, like an idea for a community-service project.” 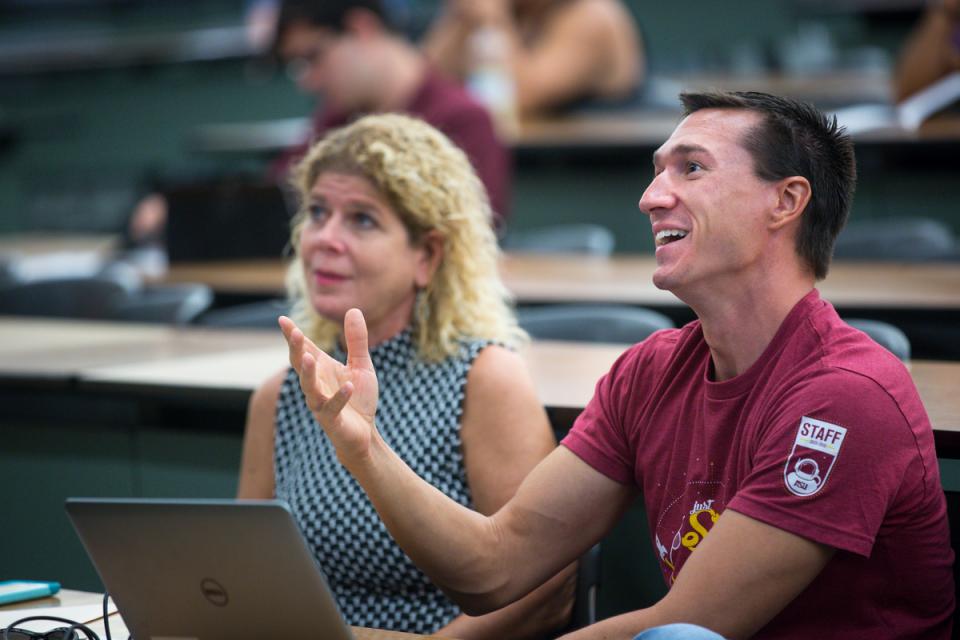 Launch Days begin with outreach to students about all the ways they can see their ideas come to life. Tables are set up around campus and volunteers gave out T-shirts and notebooks with the motto “Just Start.”

For Open Pitch, students create two-minute “elevator pitches” that describe their ideas and drum up enthusiasm. They are expected to explain their target markets, how they would get their ideas off the ground and how they would make money.

During last week’s session, they pitched to each other and to faculty members, who asked questions and gave feedback.

Most of the ideas were mobile applications or software designs, but a few were services and products – like a cooling insert for backpacks to stop “back sweat” and a wipeable tablet to decrease paper consumption.

Some ideas were ambitious, such as software to replace the search-engine optimization dominated by Google.

Others were very specific, hoping to hit that sweet spot in the zeitgeist that would launch them into the realm of startup success stories like Facebook or Twitter.

Freshman Scott Fitsimones pitched “Drop Spot,” a social-media app that would allow users to “pin” a location and see which of their friends had been there previously. It’s sort of like leaving a note in someone’s locker that he can see only when he opens the locker.

“It has the power to bring people closer together,” Fitsimones said.

The app would generate revenue through advertising.

“I’m curious about this as a meaningful tool,” said Erika Feinberg, a faculty associate and entrepreneurship mentor, who was encouraging, yet realistic in her feedback to all the students.

“Be very clear about your target audience and make sure they have money,” she told another, whose proposal depended on students spending money. 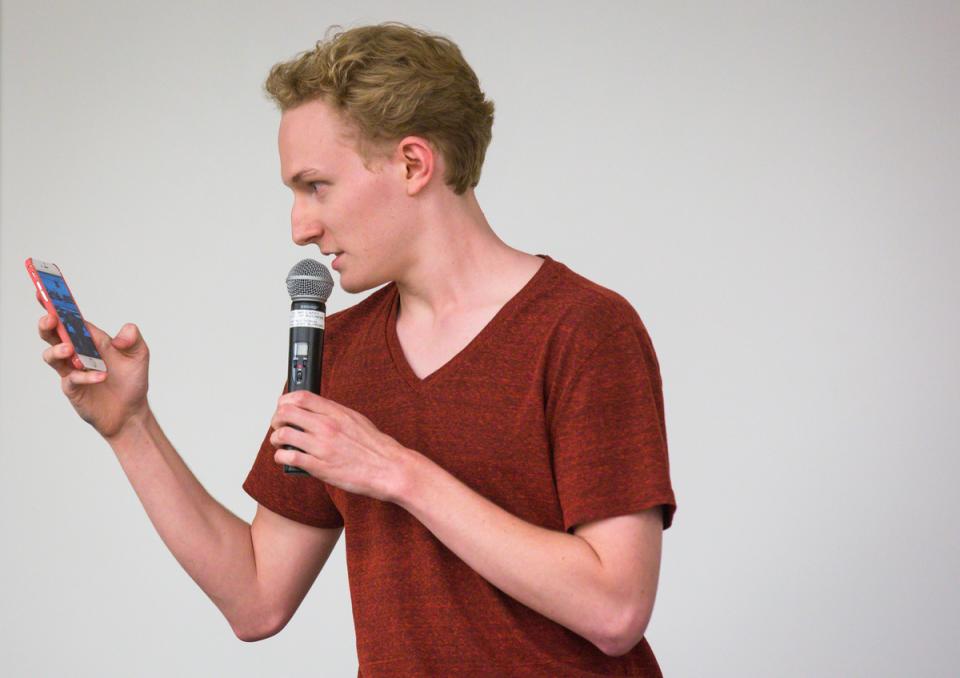 Westlake encouraged Alfonso Gutierrez to apply for a grant to fund his idea, Upper Echelon Empire, a community-service program for skateboarders.

Gutierrez’s project would allow young people to volunteer at a hospital and earn points that would allow them to buy skateboarding gear.

“A lot of times these kids don’t know anybody but their peers. It would great if they could meet some doctors,” Gutierrez said.

He compared his project to Tom’s, the business that operates on a one-for-one model of social responsibility – giving a pair of shoes to a poor child for every pair sold.

The first Launch Day Open Pitch, held last spring, drew more than 120 students across the four campuses. Westlake said that event was a competition, and the winner didn’t even decide to participate until minutes before it started. This year’s event was for feedback only.

He said that about a quarter of the students at the first Open Pitch followed up with some other type of engagement, such as applying for the Edson Student Entrepreneurship Initiative, the Clinton Global Initiative or the Innovation Challenge.

Some of the students who presented last week have already done a lot of work, securing provisional patents and setting up companies.

For instance, Fitsimones said he is in a bidding war to acquire a website domain name for his Drop Spot app.

Others have already succeeded and failed at businesses. James Flores, who pitched a device-repair subscription service, had co-founded two previous businesses. He sold one and closed the other.

“There’s an epidemic of broken phones,” he said while strolling across the stage, holding up his phone to the audience and revealing a cracked screen.

“See, my phone is broken too.”

Another problem we can all relate to.

The next Launch Days are Thursday, Oct. 8, on the West Campus; Thursday, Oct. 15, on the Polytechnic Campus, and Thursday, Oct. 22, at the Downtown Phoenix Campus. All of the Open Pitches run from 5 to 6:30 p.m. For Open Pitch room locations, visit https://entrepreneurship.asu.edu/launchday.