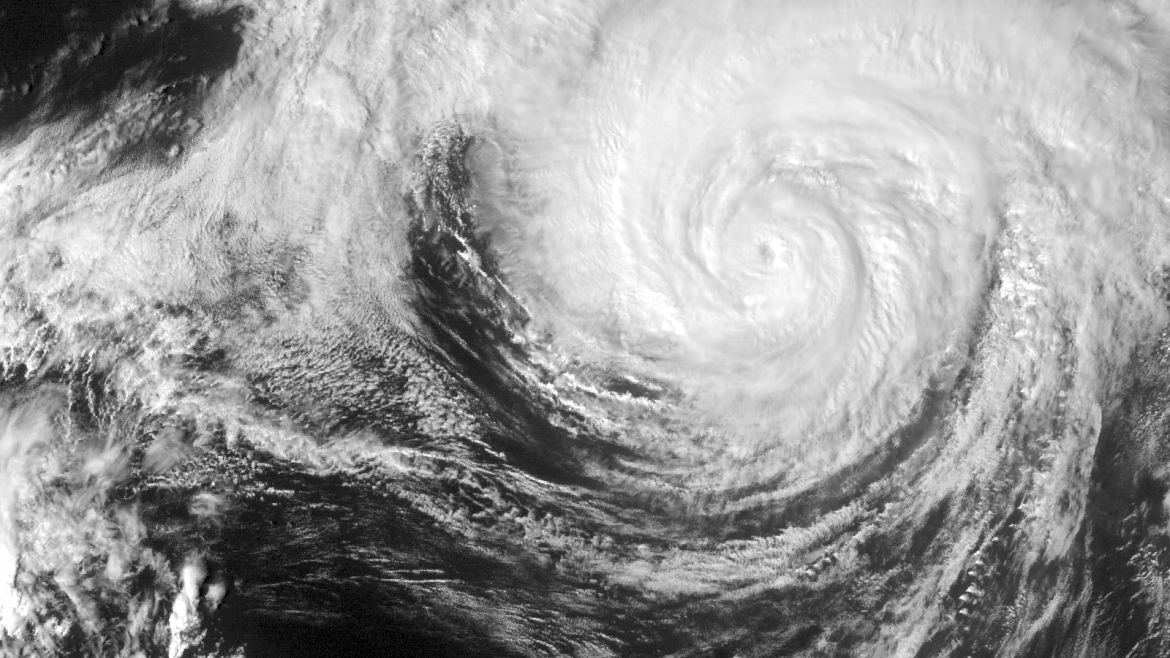 At least 15 people have been killed, 11 dams have collapsed and more than 70 miles of a major interstate highway closed as Hurricane Joaquin hit the Carolinas in what meteorologists are calling a 100-year storm.

It has been 10 years since Katrina broke the levies of New Orleans and three years since Sandy flattened the coastlines of New York and New Jersey. With record-strength disasters becoming the new normal, scientists are digging into finding ways cities can survive them.

Swindell is part of a team of 50 researchers from 15 institutions led by ASU professors to investigate how cities can endure and bounce back from storms like Joaquin, Sandy and Katrina.

The Urban Resilience to Extreme Weather-Related Events Sustainability Research Network (UREx SRN) — a unit of the Julie Ann Wrigley Global Institute of Sustainability — aims to find flexible solutions and educate officials about what gaps in their systems need to be filled.

This week, Charles Redman, professor in the School of Sustainability who leads the team, is visiting storm-lashed New York City; Syracuse, New York; and San Juan, Puerto Rico, to meet with civic officials.

“In New York in particular they’ve taken this seriously,” Redman said. “Our approach on this project is to transfer thinking from fail-safe to safe-to-fail.”

Six New York hospitals and nursing homes flooded during Sandy. They all had emergency generators, but the generators were in the basement. Moving them to an upper floor is a fairly simple and low-cost solution.

“The resilient part is when these things happen, make them not disasters,” Redman said.

Clark Miller, a senior sustainability scientist in the Global Institute of Sustainability, is co-leading a team tasked with producing bold new ways for changing how cities build to meet violent storms.

“Our job is to work with cities to help them think about strategies for taking the knowledge and insight and networks being built through the UREx project and putting them to work on behalf of making the city more resilient,” Miller said. “The challenge the cities are going to have is that they have a lot of infrastructure built already. They don’t have the money to rip that out and start again. … How do they live with infrastructure they’ve already got?” 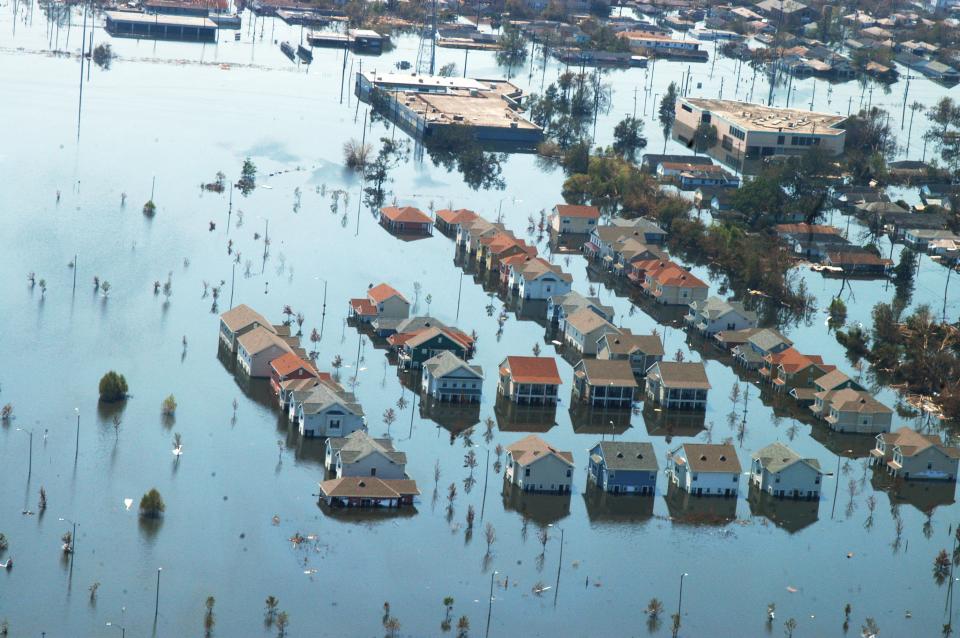 Aftermath of Hurricane Katrina in Louisiana Photo By: US Air Force via Wikicommons

Nationally, hard infrastructure — dams, river levees, buildings, electrical grids and the like — has all been built with a climate model at the core of its design.

“That model is based on — generally speaking — 30-year averages of the weather,” Miller said. “When they designed the hurricane protection system in New Orleans, they built it based on 75 years of data, for a hurricane that would occur once every hundred years.”

New Orleans’ flood-protection system pre-Katrina was designed based on a 1955 study with outdated climate data.

“The city didn’t know its protection had been built around an outdated model,” Miller said. “As time passes, those stats will become more and more useless. … We’re going to have to shift climate from a static to a dynamic variable. Three 500-year storms have hit the Midwest in the past 20 years. That’s not normal.”

Green solutions will be one tool offered by UREx, but not the only tool, Redman said. Residents should benefit from solutions as well.

The project isn’t about telling people they can’t live in hazard zones. Oceanfront homes on eastern Long Island were rebuilt after Sandy, but not on the dunes where they used to be. They were rebuilt a few hundred yards in back of the dunes, with a lawn or a pool or tennis courts in front.

“I like that,” Redman said. “That open space is an amenity.”

Finance is a factor in the UREx project.

“It’s great to have good science, but if you can’t pay for it, you can’t implement it,” Swindell said.

When Sandy crushed lower Manhattan, it flooded nine subway tunnels. Only two of the lines have been fixed to date, according to Swindell.

“The problem they ran into was in not just fixing the infrastructure, but in building in some preventative measures,” he said.

Insurers wouldn’t cover the new infrastructure, so the City of New York created a reinsurance company — its own insurer, in effect. The reinsurer sold bonds. If water in certain locations exceeds a certain height, that triggers the spending of the bond money. Assuming there is no breach of the specified level, the bond buyers get their principal back and 4.5 percent over the Treasury rate. The bonds have a three-year lifespan.

“If you lose, you lose it all,” Swindell said. “You’re betting against Mother Nature. … There’s some risk, but it’s been a really popular tool. … You’re spreading the risk to the private sector.”

It’s the first time this has been done for public property, not private property, according to Swindell.

“It’s an old tool used in a new way,” he said. “The trick — and this is where it gets a little tricky — is calculating what that risk is. Am I buying catastrophe bonds on the San Andreas Fault? Or am I buying a catastrophe bond for a tornado in Phoenix?”

The UREx project, which comes the National Science Foundation awarded $12 million, will last for five years.

Images of Mars taken by a visual and infrared camera designed at Arizona State University take a star turn in the new hit movie “The Martian.”Last November, the film production company for "The Martian" approached ASU's School of Earth and Space Exploration about using THEMIS — Thermal Emission Imaging System — imagery in the movie. “We gave it, of course, and ASU is duly credited in th... 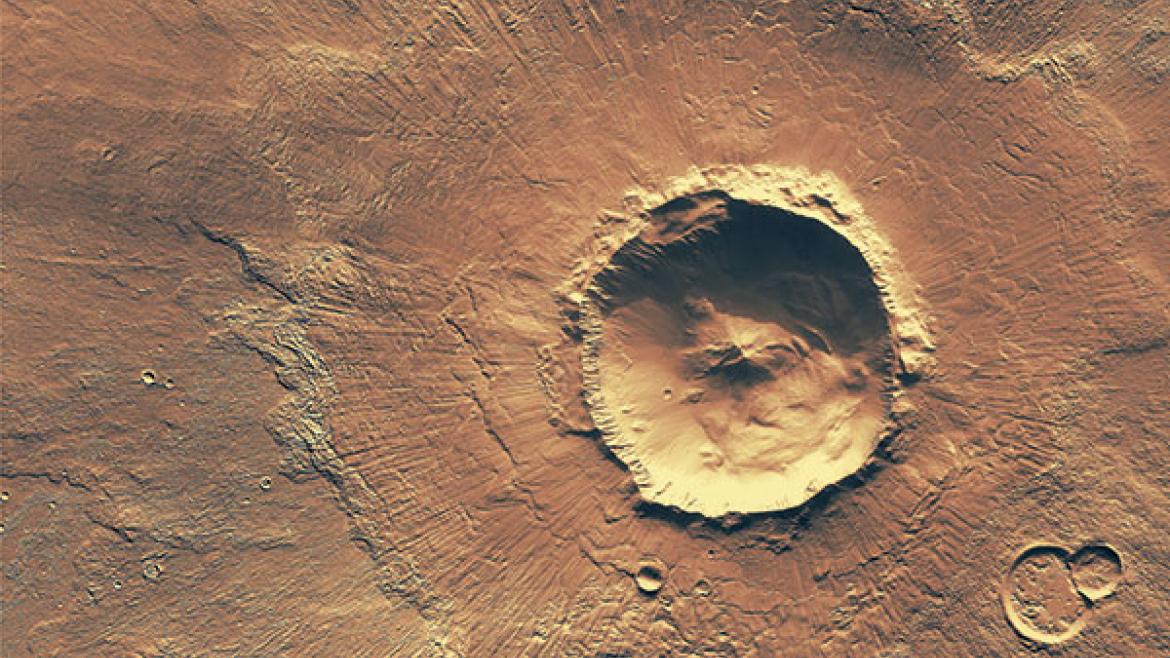 Images of Mars taken by a visual and infrared camera designed at Arizona State University take a star turn in the new hit movie “The Martian.”

“We gave it, of course, and ASU is duly credited in the crawl — way, way at the end, just before the copyright notice,” said Robert Burnham, manager of media relations for the school. “I'm really glad to see our imagery on screen. And while the movie does skate lightly over some brutal realities of Martian climate and conditions, it's a good story well-told.”

THEMIS passed 60,000 orbits of the Red Planet this past summer. It is carried on NASA's Mars Odyssey orbiter, the longest-operating spacecraft from any nation at Mars. Since arriving there, the ASU camera has taken nearly 400,000 images. 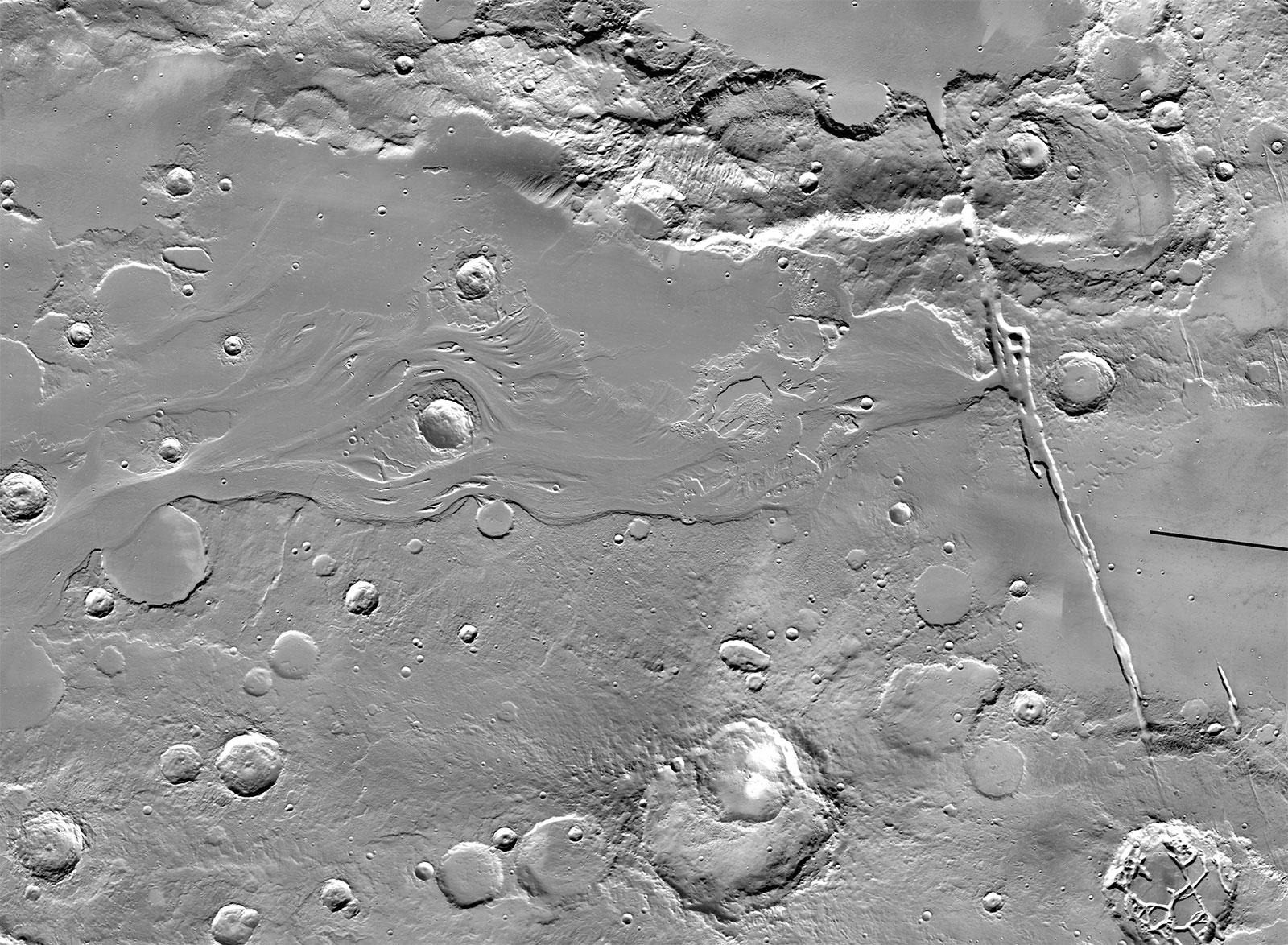 The new movie "The Martian" uses several images of Mars taken by a camera designed at Arizona State University. This one is used in the film by the director of Mars operations, when he draws on the image to measure with a ruler to figure out where stranded astronaut Mark Watney is going.

The camera — which operates in five visual and nine infrared (heat-sensitive) "colors" — was designed by ASU professor Philip Christensen, the instrument's principal investigator.

The movie production gave no hint of which images they would choose, Burnham said.

“We were a cheap ‘get’ for the film company because THEMIS images, like all NASA images, are public domain, being taxpayer-funded,” he said. “So it seemed likely to me they would use at least a couple. … I sent them the links to all of our ‘best of THEMIS’ collections and told them to take a look and to download whatever else might be usable.”

THEMIS images and mosaics appear briefly in a few scenes.

“I spotted one or two images framed and hung on the wall of the NASA director's office,” Burnham said. “One is a mosaic of either Tooting Crater or Bacolor Crater.”

Not in doubt, however, is a third THEMIS image that plays a role in the plot. It is shown when Vincent Kapoor (director of Mars operations) measures the photo with a ruler to figure out where stranded astronaut Mark Watney is going. (Answer: the old Mars Pathfinder landing site, to scavenge the spacecraft for parts.)

“The image he uses is actually the THEMIS mosaic of Mangala Fossae and Valles, a long way from the Ares Vallis outwash area that the real Pathfinder landed at,” Burnham said. “Oh well, this is Hollywood.”

The production crew did ask specifically about the Mangala Valles image, but said only that they were thinking of using it as set decoration for the NASA head official's office, Burnham said.

THEMIS has achieved a longer run of observations than any previous instrument at Mars, according to Christensen, Regents’ Professor of Geological Sciences.

NASA officials report Odyssey is in good shape and has enough propellant left on board to orbit the Red Planet for another decade.