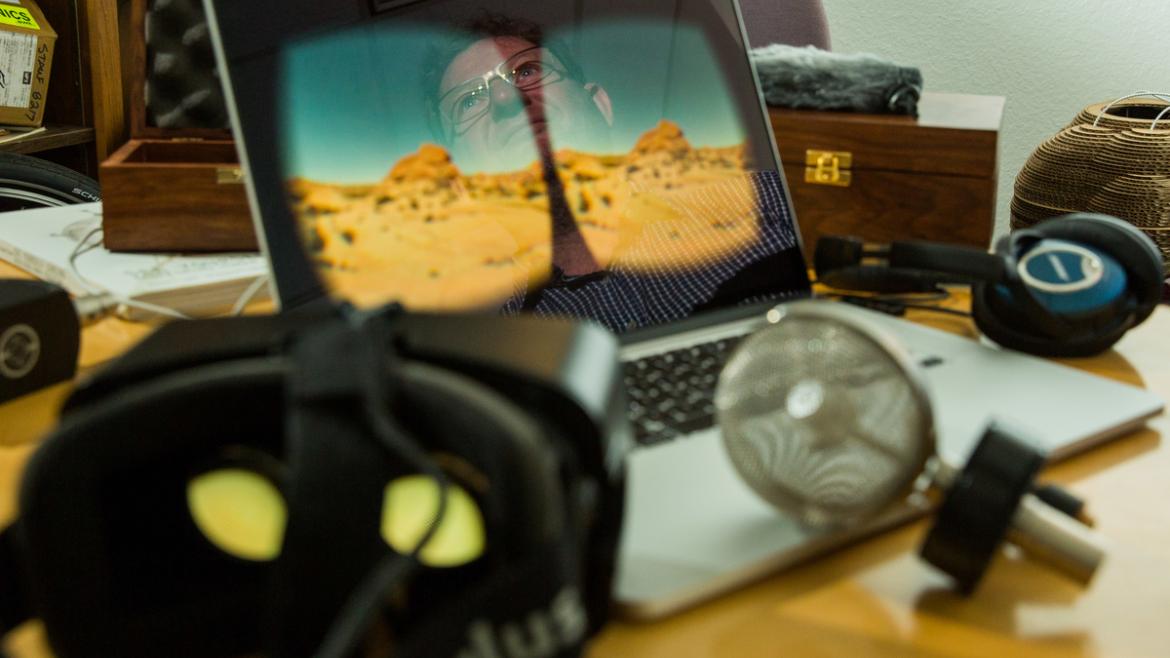 If a tree falls in a forest and no one is around to hear it, ASU's Listen(n) project will tell if it makes a sound

A tree falls in a forest and no one is around, but ASU can capture its sound.
Researchers at ASU are documenting and engaging with the sounds of the Southwest
October 2, 2015

Adventures with an Oculus Rift

“Here’s a question for you,” said Garth Paine. “How often does a plane fly over Joshua Tree?”

It’s an odd query about the national park 140 miles east of Los Angeles, halfway between the California coastline and the Arizona border, as it isn’t the kind of place people typically plant themselves for days or weeks to study air-traffic patterns.

But Paine, a senior sustainability scientist(and associate professor in Arizona State University’s School of Music and School of Arts, Media and Engineering), asks it because he wants to share what it sounds like when an airplane flies over a desolate chunk of Joshua Tree’s nearly 800,000 acres of protected wilderness.

The park is one of seven desert areas that Paine and a team of researchers are studying as part of Listen(n) — a multi-disciplinary project to document and engage with the sounds of national parks and reserves in the American Southwest.

The team has collected surround-sound field recordings in these environments since 2013. Their audio makes up one of the largest online databases of its kind, which is free and publicly accessible online. They plan to grow it over the coming decades by equipping park visitors and their local communities with tools to capture and respond to the acoustics of each place. 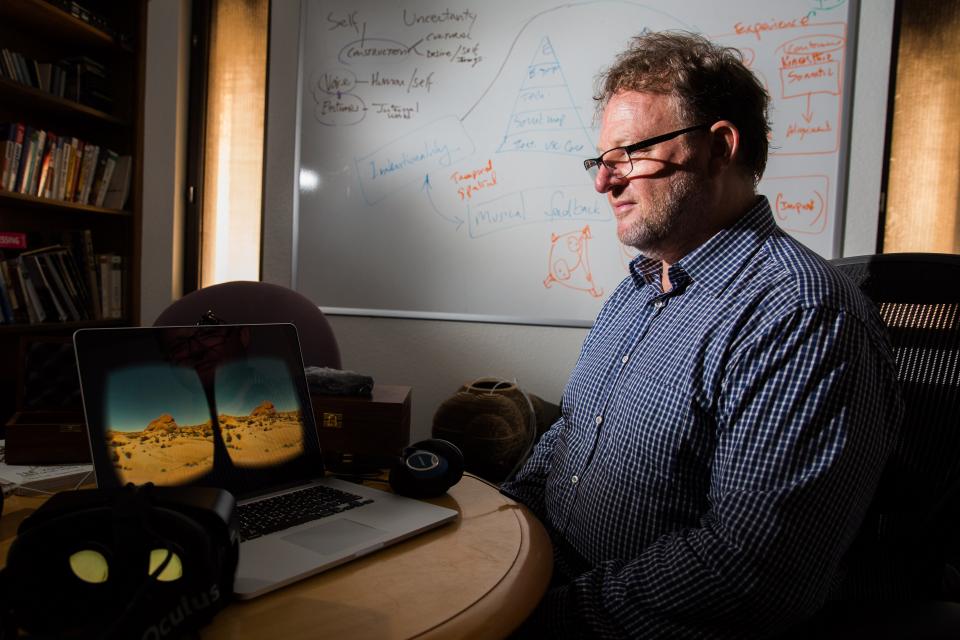 According to the researchers, who also include associate professor of German studies and information literacy and senior sustainability scholar Daniel Gilfillan and visiting scholar and artist Leah Barclay, a change in the sonic makeup of an environment can indicate changes to the plants and animals that inhabit it.

Gilfillan cites a study about urban robins that sang during the day; when man-made noise production increased in their space, they shifted their behaviors and began communicating only during the quieter nighttime.

“Whatever the makeup of the landscape, it generates an acoustic container that colors everything in it,” Paine said. “So if you then come in and clear that landscape, that acoustic property is therefore cleared and the context is completely taken away and everything therefore changes.”

The Listen(n) team developed a new, spherical audio technology to precisely record those changes. With the 3-D format, they are able to match the angle from which a sound is recorded with 360-degree visual images enabled by an Oculus Rift headset to create what they call the “EcoRift experience.”

The experience, which was introduced at the 2014 South by Southwest-Eco conference in Austin, Texas, presents a virtual-reality sensation of being in the desert. As users turn their heads to see the landscape, the sounds change to represent corresponding spatial shifts in pitch or resonance.

The researchers hope the experience will encourage visits to the parks and provide access for the elderly or mobility-impaired, especially as virtual reality becomes ubiquitous.

They are also discussing with park rangers the idea of capturing the sights and sounds of protected areas that are normally off-limits to guests.

Engaging people to better understand their relationships with a place, and their agency within it, is closely connected to the Listen(n)team’s fieldwork: They offer listening workshops in collaboration with national park administrators and community organizations near their research sites in Joshua Tree, Death Valley and Sequoia and Kings Canyon national parks and in Organ Pipe Cactus National Monument.

“One of the most inspiring things is when we did one-day workshops during National Park Week,” Paine said. “When you give the kids a microphone, a recorder and a pair of headphones, they are just blown away. I’m endlessly dumbstruck by how they direct attention and really investigate.”

To encourage discourse, the team created a digital resource for storytelling, mapmaking and art related to environmental changes within soundscapes.

On Oct. 16, they will present an additional aspect of their research as they debut three of five musical works derived from the field recordings of the Listen(n)project that feature leading composers in experimental sound.

“When you give the kids a microphone, a recorder and a pair of headphones, they are just blown away.

At times, the compositions reflect the silence of a solitary land. At others, they amplify an eagle’s call, the start-stop chirping of tree frogs or winds gusting through dried shrubbery. They also contain the distant hum of highway traffic, the reverberations of a vending machine and the rattling of power lines.

And, of course, the relentless sounds of jet engines overhead, bisecting the open sky on the flight path from Los Angeles International Airport — exactly once every 30 seconds.

The Listen(n) project is supported in part by a seed grant through ASU’s Institute for Humanities Research (IHR). IHR seed grants advance faculty research with the aim of improving the quality of proposals to external funding agencies and by benefiting a wide community through public programming that features their scholarship.

The leader of the sixth-largest city in the nation did not mince words Wednesday when he stressed the economic importance of America’s neighbors during an Arizona State University-organized conference in Phoenix. Phoenix Mayor Greg Stanton kicked off ASU’s first North American Economic Connectivity Conference, which brought together more than 200 industry leaders, government officials and edu... 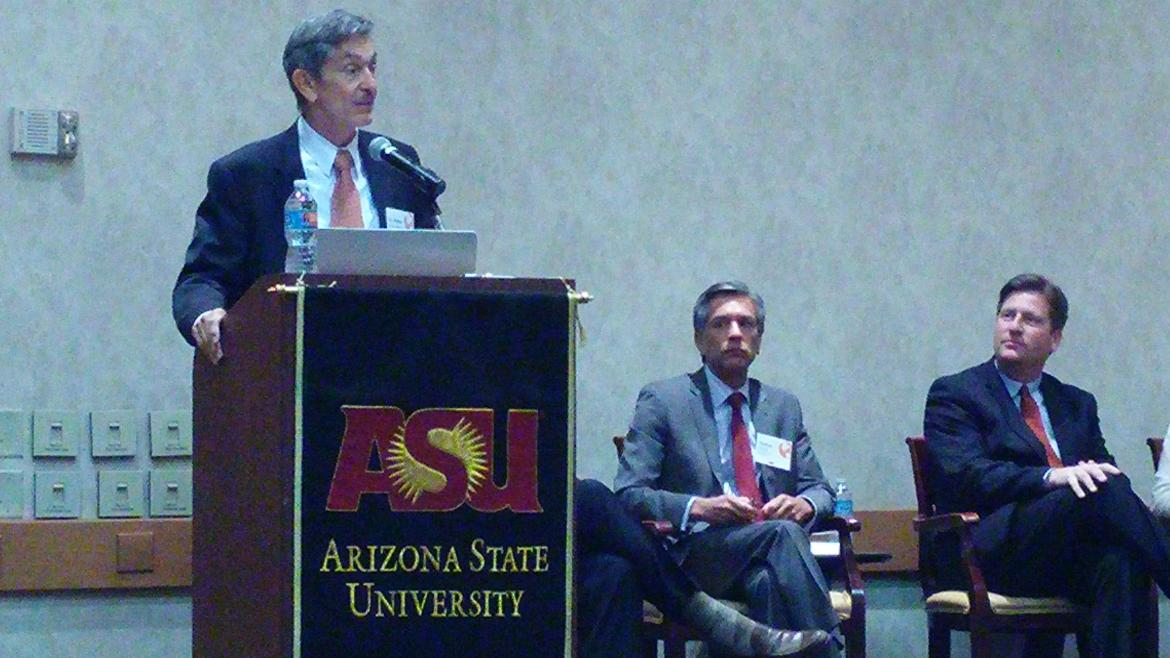 The leader of the sixth-largest city in the nation did not mince words Wednesday when he stressed the economic importance of America’s neighbors during an Arizona State University-organized conference in Phoenix.

“We cannot begin to talk about the U.S. economy, especially our local economy, the Phoenix economy without taking into account our North American partners in Mexico and Canada,” he said. “We simply cannot build a wall or slap on a tariff and magically see 4 percent gross domestic product growth. It’s not going to happen.”

The mayor revealed his city’s progress with Mexico, including the upcoming opening of a ProMexico office in Phoenix. ProMexico offices, nestled under Mexico’s economy secretariat, promote international trade and investment. Mayor Stanton also revealed that although U.S. exports are on the decline, Arizona exporting is up 12 percent overall and up 22 percent to Mexico.

“ASU picked a great time for this conference, especially as far as Phoenix is concerned,” he added.

Thomas Guevara, deputy assistant secretary for regional affairs in the Economic Development Administration for the U.S. Department of Commerce, also provided opening remarks and emphasized the importance of higher learning institutions in inciting this type of collaboration.

“Universities, for example, are key partners in creating the conditions for growth,” said Guevara. “They are social-network centers, knowledge creators and most importantly institutions of openness and diversity that parse the new ideas and enable us to solve the difficult problems. This is why this gathering supported by ASU is so important.”

ASU leaders understand the “tremendous” continued economic development opportunities in the Mexico and Canada zones, said Sethuraman “Panch” Panchanathan, senior vice president of ASU's Office of Knowledge Enterprise Development. He said the university already is partnering with its neighbors on many fronts, including energy sectors, aerospace and biomedical devices.

Panchanathan also said that the university’s work is being noticed and mentioned a recent accolade bestowed by the U.S. News and World report rankings.

Through four panel discussion held throughout the day, experts from all three countries provided a glimpse of ongoing economic efforts, tactics, opportunities and challenges. The first panel looked at the use of cluster mapping as a way to identify transborder opportunities. Subsequent panels focused on initiatives to catalyze economic development, border business experiences from current industry leaders and specific opportunities in the Arizona and Sonora, Mexico, region.

One of the leading Mexican universities, and an ASU partner, conducting research to pinpoint areas for economic development is the Instituto Tecnológico y de Estudios Superiores de Monterrey. Pablo de la Peña is the director of strategic programs and executive education for its School of Government and Public Transformation, and served as one of the presenters during the conference. He has been on the forefront on identifying “zones of opportunity” through cluster mapping of industries.

“The space and medical-equipment sectors are growing greatly in Mexico,” he said. “The idea is to have a regional area of binational development so we can identify business opportunities for both of these sectors, for both of these countries.”