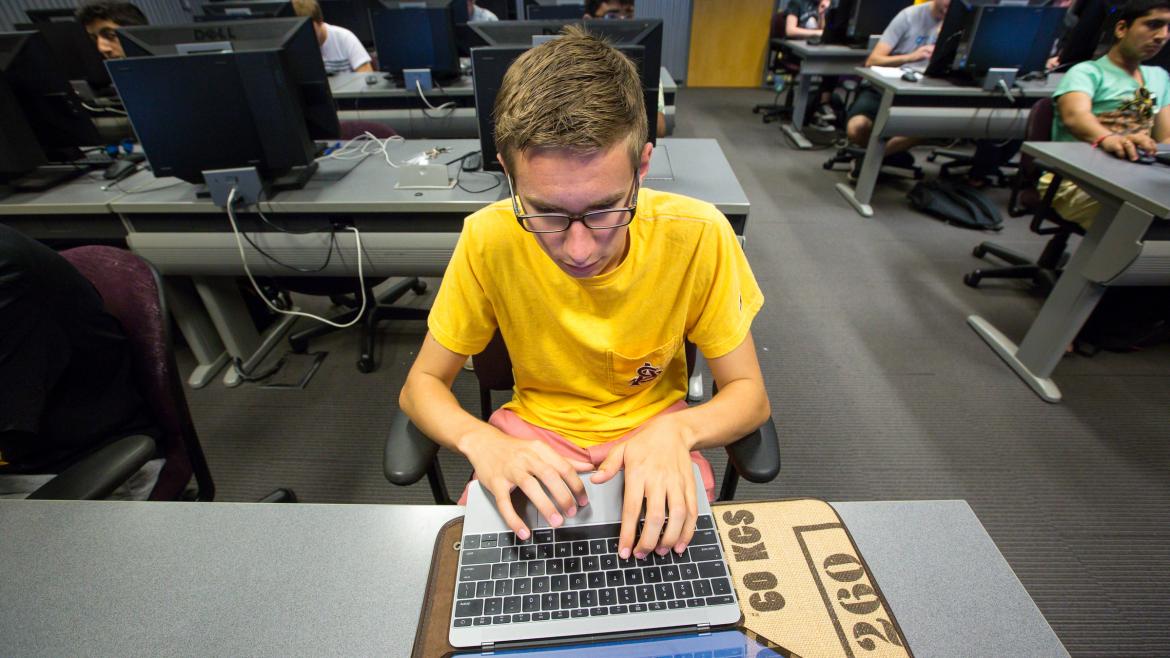 Year One: Life at ASU — Eric shifts his focus

"Year One: Life at ASU" is a periodic photo series following five freshmen navigating their first year at ASU. This installment checks in on Eric Arellano in the classroom setting. 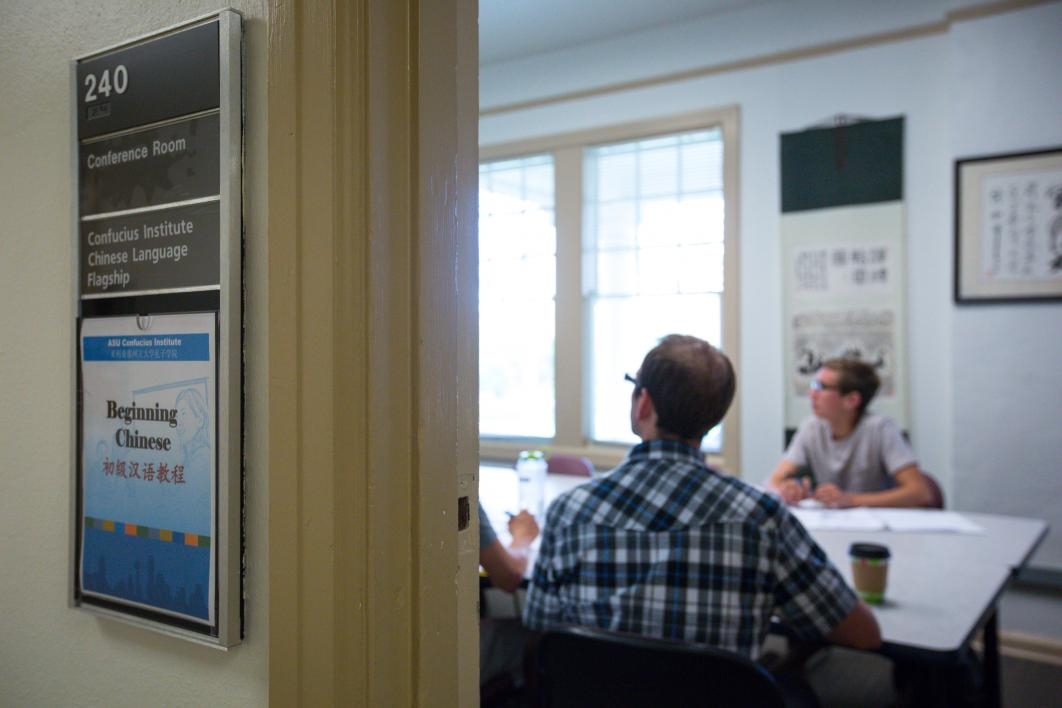 Eric Arellano is one of four students who show up for the first class of the Confucius Institute's Beginning Chinese on Sept. 10. Three, including Arellano, are Flinn Scholars who are taking the course to prepare for their three-week trip to China early next summer. 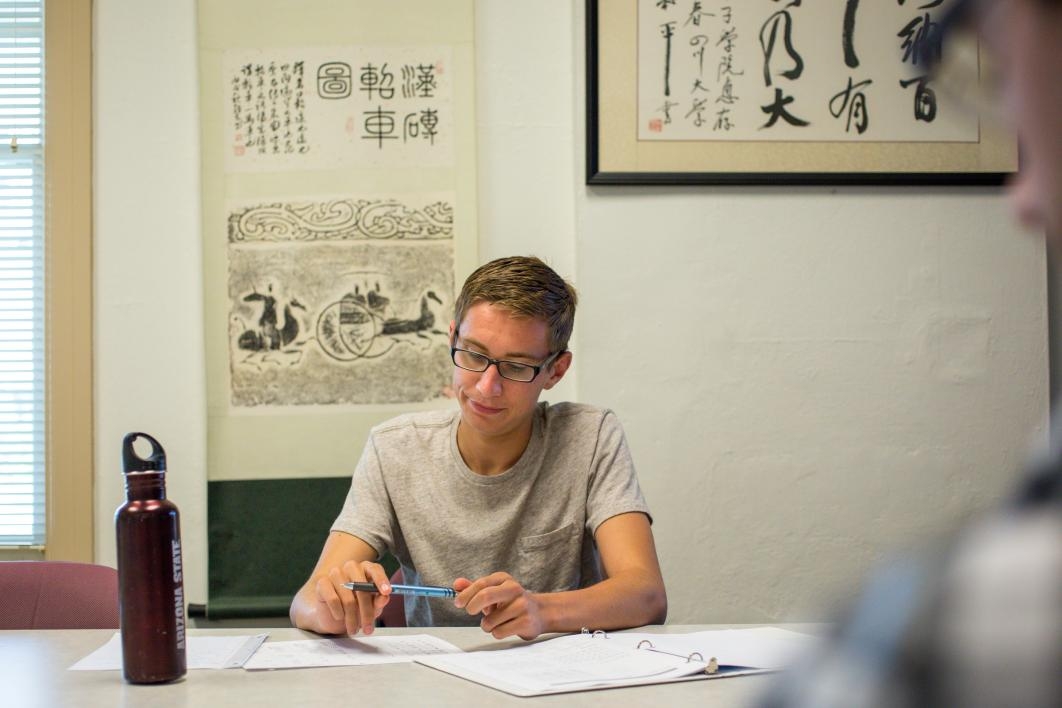 Arellano learns the new sounds of letter combinations in his Beginning Chinese class — learning language can be a daunting task, but Arellano is eager for the challenge and dives into the class. 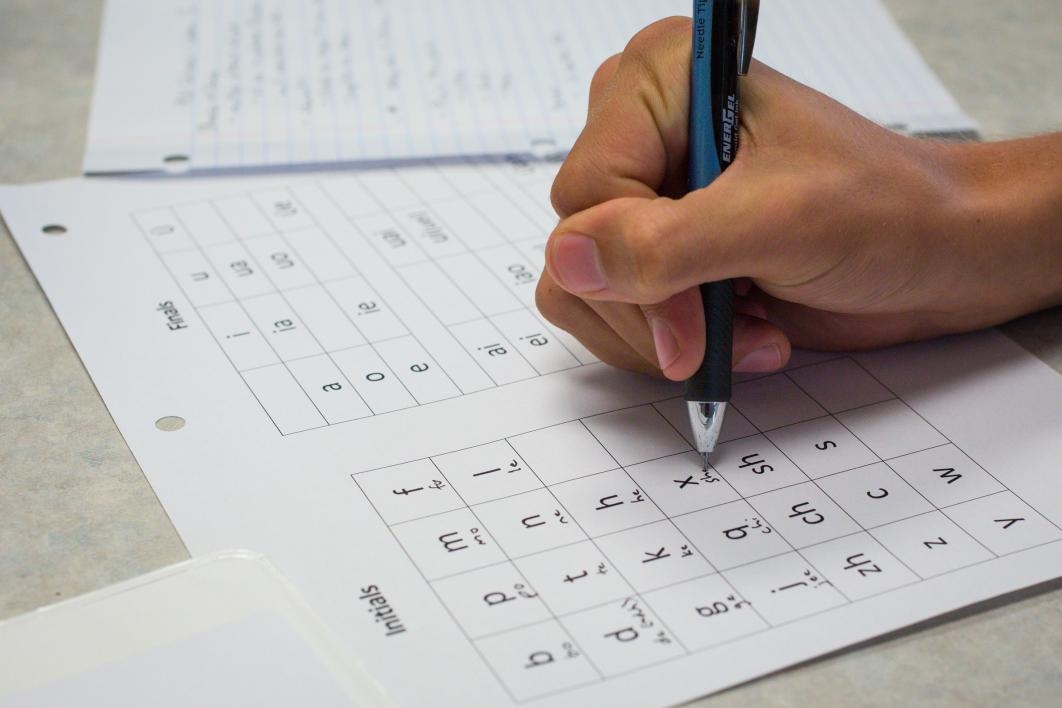 Every student has a method to learning; Arellano shows us a bit of his technique as he writes the sounds of letters under the letters during his Beginning Chinese class. It's a way to reinforce the right way to pronounce the language. Beginning Chinese teacher Yi Wang goes around the room asking her students to pronounce letters. Arellano did well, consulting his notes — with the pronunciation marks — to show his evolving grasp of the language. 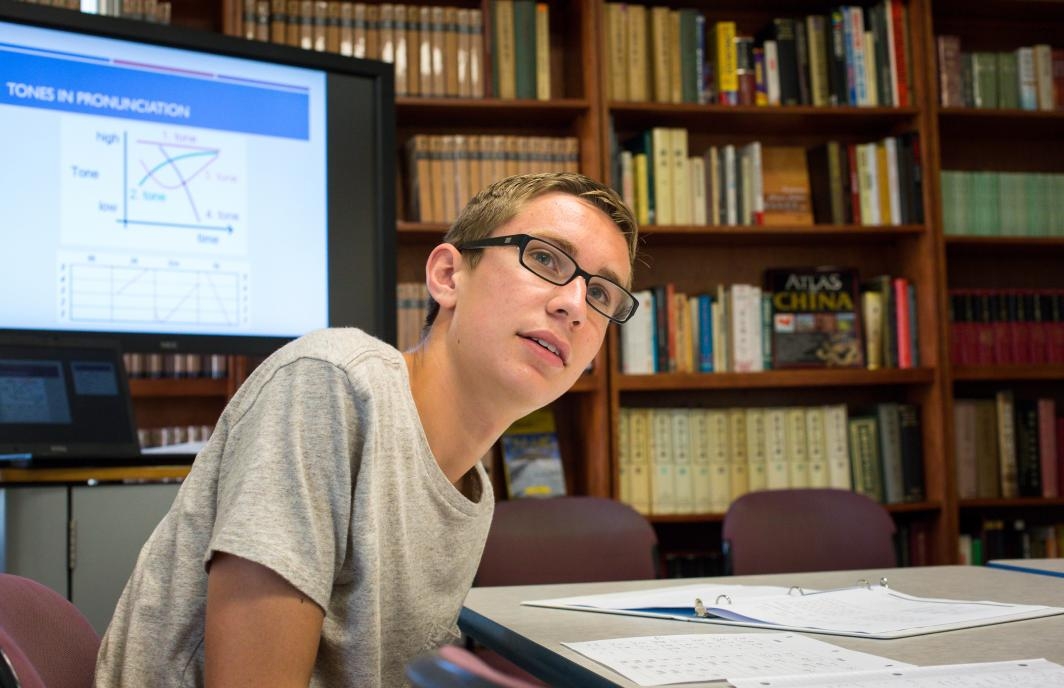 Always eager to learn, Arellano studies the letter sounds on the first day of Beginning Chinese class. He hopes to have a grasp of the language by next summer. Arellano came to Arizona State University to major in sustainability. But a few weeks into his first semester, the Tucson native has changed his major to computer science — though he'll still be minoring in sustainability. Here, Arellano sits among the students in his Principles of Programming in Java lab on Sept. 4. 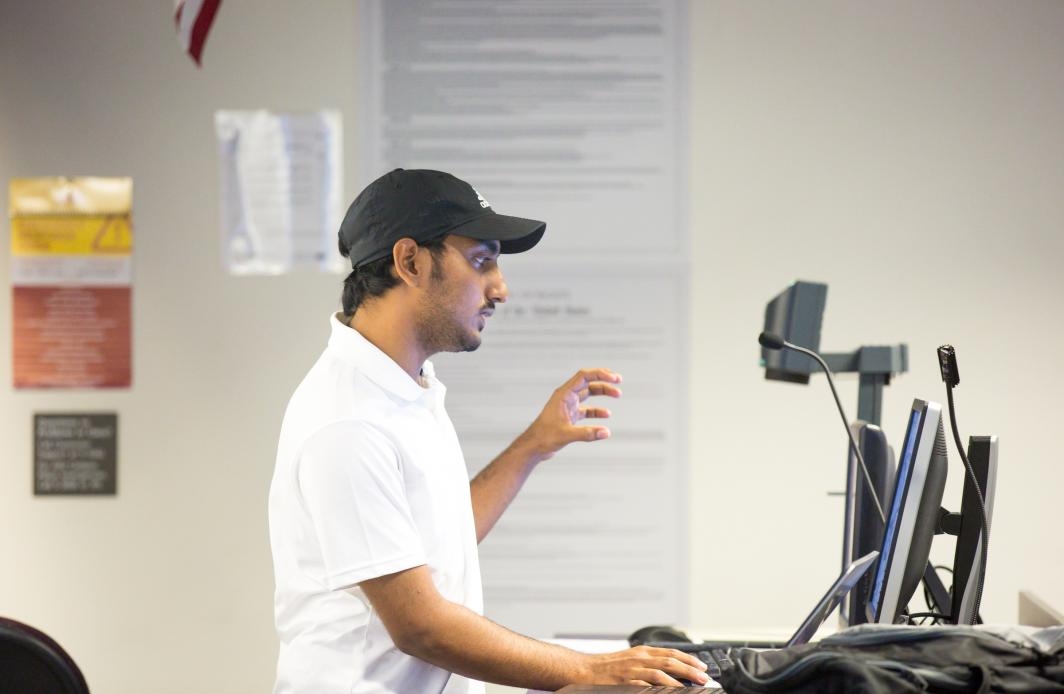 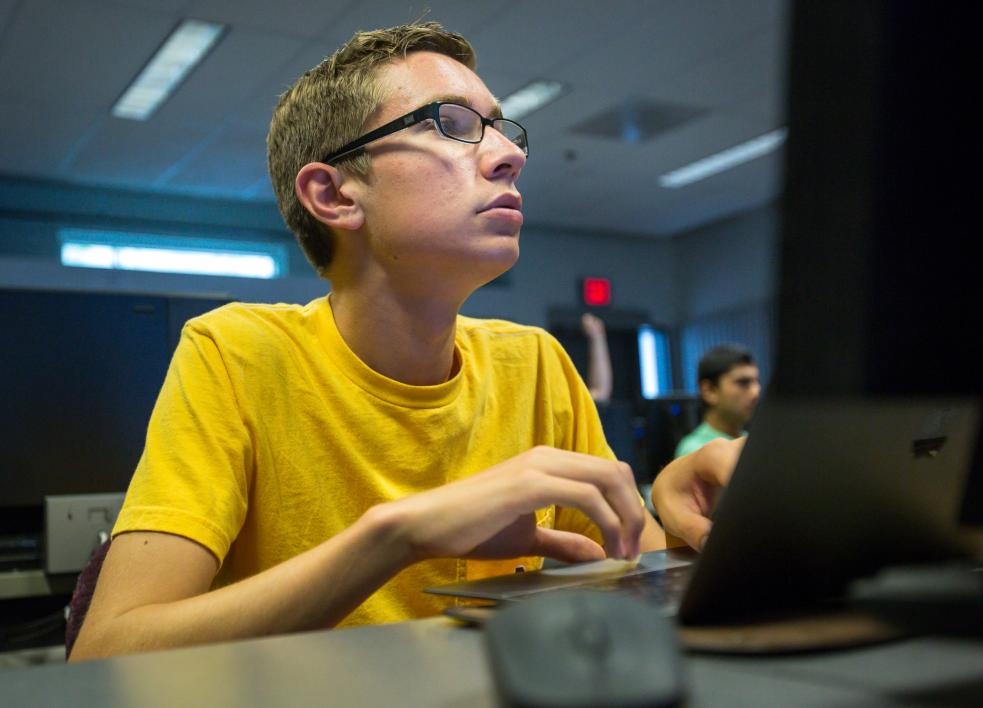 Arellano looks over his work in his Java lab. The Flinn Scholar is working toward a degree in computer science. His goal is one of altruistic entrepreneurship — to create a company that is viable and improves the world.

See what Eric was up to earlier in the semester in this past gallery:

Today the White House announced the creation of a nationwide “CubeSat competition” that partners high school students with leading universities for the development and operation of small space satellites. The announcement was part of the festivities surrounding White House Astronomy Night on Oct. 19.The CubeSat competition is being organized by Cornell University and the Museum of Science Fic...

Today the White House announced the creation of a nationwide “CubeSat competition” that partners high school students with leading universities for the development and operation of small space satellites. The announcement was part of the festivities surrounding White House Astronomy Night on Oct. 19.

The CubeSat competition is being organized by Cornell University and the Museum of Science Fiction in Washington, D.C. Seven universities, including Arizona State University, will be participating partners. ASU’s participation will be led and organized by Jim Bell, director of the ASU Space Technology and Science (“NewSpace”) Initiative, and Ed Finn, director of ASU’s Center for Science and the Imagination. 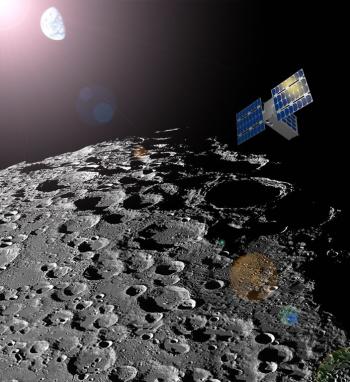 CubeSats are a new and revolutionary way of doing space science. Because of their small size (roughly the size of a shoebox) and low cost of construction and operation, CubeSats have the potential to democratize space science, providing opportunities for students and citizens to design and even operate missions of their own. CubeSats are typically carried into space as secondary payloads on larger, more traditional space missions.

“The CubeSat competition provides a great opportunity for students to get direct, hands-on experience in space science, engineering and exploration,” said Bell, an ASU professor in the School of Earth and Space Exploration. “Part of our mission is to engage the community, especially young people, in the excitement of science, technology, engineering and mathematics (STEM) topics like space exploration.”

“This contest invites a new generation of explorers, researchers and entrepreneurs to dream big,” said Finn, an assistant professor in the School of Arts, Media & Engineering and the Department of English. “Space has long been a canvas for great stories and grand ambitions, from the Apollo Program to ‘Star Trek,’ and the CubeSat competition gives winners the chance to see their ideas not just realized but launched into orbit.”

In the CubeSat competition, teams of high school students nationwide will propose inexpensive (less than $10,000) CubeSat missions to test technologies or conduct small-scale science experiments in space. Those proposals will be submitted by early 2016 and judged during the spring, with winners announced in summer 2016.

The students will be encouraged, but not required, to reach out to participating universities, NASA Centers or aerospace companies for help with their proposal as they see fit.

CubeSat competition judges will work with participating universities to match up their researchers’ expertise with the best-fit high school proposals (based on geography, research or technology synergies, etc.). It is expected that the universities will develop the technology and engineering solutions needed to make the high school students’ proposals functional and fit for flight.

University researchers and high school students will interact by teleconference, videoconference and email. Some universities might bring students to campus to participate in various aspects of the design and build work. In some cases, university teams may be able to carve off one component of the CubeSat system for the students to work on and then integrate it into the larger system later in the program.

For Bell, the benefits of the competition are both inspirational and real.

“The kinds of skills needed to plan, design, test, build and fly a spacecraft mission are directly translatable to a wide variety of careers in STEM and high-tech fields,” he said. “Employers out there want not only book-smart students for these careers, but students who have gotten their hands dirty  — literally or figuratively — building real-world mechanical, electrical or even software systems.

“Projects like this provide a great opportunity for practical, pragmatic teaching moments for budding engineers and scientists, as well as great foundational skills in teamwork, critical thinking and problem solving even for students who do not go directly into careers in those fields.”