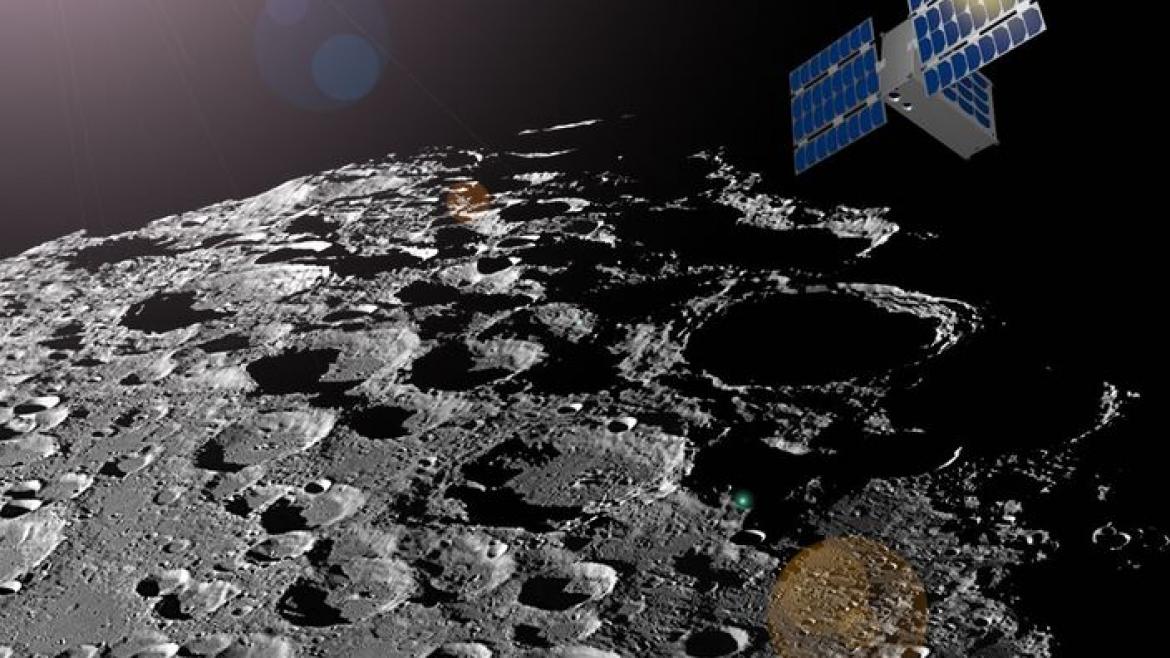 A spacecraft the size of a shoebox with Arizona origins will soon be orbiting our nearest neighbor to create a map of water-ice on the moon.

The NASA-selected CubeSat will be designed, built and operated at Arizona State University and is one piece of the agency's larger mission to fully characterize the water content at the lunar South Pole in preparation for exploration, resource utilization and improved understanding of the moon’s geologic history.

The spacecraft, called the Lunar Polar Hydrogen Mapper, or “LunaH-Map” for short, will produce the most detailed map to date of the moon’s water deposits, unveiling new details about the depth and distribution of the ice that has been tentatively identified from previous missions. Confirming and mapping those deposits in detail will help NASA understand how much water might be available and will help inform NASA’s strategy for sending humans farther into the solar system.

The ability to search for useful assets, such as hydrogen, can potentially enable astronauts to manufacture fuel and other provisions needed to sustain a crew for a journey to Mars, reducing the amount of fuel and weight that NASA would need to transport from Earth.

This is the third major space project for which NASA has selected ASU in the past year, and it is the first planetary science spacecraft mission that will be led by ASU. It represents a major achievement for planetary geologist Craig Hardgrove, the School of Earth and Space Exploration postdoctoral research associate who proposed the mission and will be overseeing it as principal investigator.

“All of our previous NASA mission involvement has consisted of us having instruments on other people’s missions. This is ASU’s first interplanetary mission – this is our mission, our chance to trail blaze,” said Jim Bell, professor in ASU’s School of Earth and Space Exploration and mission deputy principal investigator.

“It’s a privilege to be leading this fantastic team, and I want to make sure we do it right and deliver on our promise to NASA,” Hardgrove said.

CubeSats are part of a growing movement that is revolutionizing space exploration because of their small size and low cost of construction and operation, effectively opening the door to early-career scientists, providing them an opportunity to operate missions of their own.

“How much good science can we do with these small missions? We don’t know the answer, but we will be one of the first groups to try to answer the question,” Bell said.

Although this is one of NASA’s first forays into deep-space science experiments with CubeSats, the technology isn’t new to NASA and universities, which have recognized their value and have been building them for years.

“CubeSats are a model for a new way to gain access to space, but they are also a model for how to teach students how to design, build, operate and troubleshoot a real space mission,” said Bell, who also directs ASU’s NewSpace Initiative. “Students want to know how a spacecraft works, but not just from a PowerPoint presentation. This is their opportunity to build something. Break it. Fix it. Test it again. Launch it. Operate it. And that is the beauty of CubeSats; they provide students with the experience of going through the complete mission process.”

Overseeing all aspects of the spacecraft engineering is the mission’s chief engineer and co-investigator, Jekan Thanga, an assistant professor in ASU’s School of Earth and Space Exploration. Much of the design and development of LunaH-Map will be done in his Space and Terrestrial Robotic Exploration (SpaceTREx) Laboratory and clean rooms in ASU’s state-of-the-art Interdisciplinary Science and Technology Building 4, which with their glass windows offer an opportunity for visitors to watch the spacecraft being built, tested and operated.

In total, there will be 15 to 20 ASU professionals, including students, working on all aspects of the design, development, testing and delivery of the spacecraft.

“Within the United States there only about seven institutions that are doing interplanetary CubeSat missions,” Thanga said. “ASU brings together scientists and engineers to work on radical new concepts together, from the start. This innovative collaboration strategy leads to greater science return, and more creativity and capability.”

Other co-investigators from ASU include Professor Mark Robinson and Associate Research Professor Paul Scowen from the School of Earth and Space Exploration.

LunaH-Map, along with a number of other deep-space CubeSats, is a candidate to fly to lunar orbit on Exploration Mission-1, the first flight of NASA’s Space Launch System (SLS), which will be the most powerful rocket ever built and will enable astronauts in the Orion spacecraft to travel deeper into the solar system. NASA will provide several CubeSat missions spots on the maiden SLS mission.

LunaH-Map is a 6U (“6 unit”) CubeSat. One “unit” is a cube measuring 4.7 inches on a side; LunaH-Map strings six of these CubeSat building blocks together and weighs as much as a small child (about 30 pounds).

But just because it is small, doesn’t mean it is less sophisticated – in this case, as with our smartphones, size doesn’t compromise capabilities. LunaH-Map’s design allows for all the necessary sensors and instruments to be securely packaged inside. A jack-in-the-box-like deployer releases the spacecraft and panels pop out like little wings.

Once it arrives at the moon, the tiny spacecraft will embark on a 60-day science mission, consisting of 141 science orbits, using a suite of science instruments. 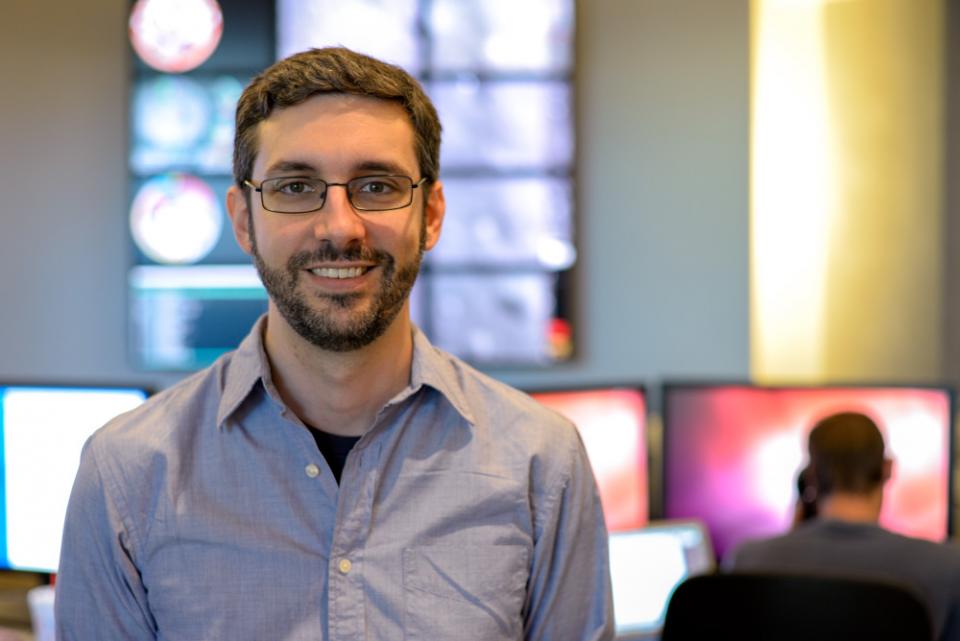 The tiny CubeSat is a big win for planetary geologist Craig Hardgrove, the School of Earth and Space Exploration postdoctoral research associate who proposed the mission and will be overseeing it as principal investigator. Ken Fagan/ASU Now

Its main instrument is a neutron detector designed to sense the presence of hydrogen by measuring the energies of neutrons that have interacted with and subsequently leaked back out of the material in the top meter of the lunar surface.

“We know from previous missions there is an increased abundance of hydrogen at the lunar poles. But we don’t know how much or exactly where,” Hardgrove said. “NASA has funded three different CubeSats to learn more: Lunar IceCube, Lunar FLASHLIGHT and LunaH-Map. They all look for water in different ways and provide different types of information.”

As LunaH-Map flies over the lunar South Pole at a very low altitude, it counts the energies of neutrons that have leaked out of the lunar surface. The energy distribution of the neutrons that hit the detectors tells us about the amount of hydrogen that’s buried in the top meter of lunar soil.

LunaH-Map will map the hydrogen content of the entire South Pole of the moon, including within permanently shadowed regions at high resolution. LunaH-Map will measure the bulk hydrogen content, up to a meter beneath the lunar surface, while the instruments on both Lunar IceCube and FLASHLIGHT will tell us about the very top few microns. LunaH-Map will create the highest-resolution maps of regional near-surface (top-meter) water-ice distribution across the entire South Pole of the moon.

“Science is a human endeavor, and part of that is knowing each other and trusting each other. And when it comes to a NASA mission and taxpayer dollars to do exploration, you got to have the credentials. You have to be trusted, you need to have proven yourself, you need to show that you can make it happen and you won’t fail. And we’ve got a history now where that’s the case,” said Linda Elkins-Tanton, director of ASU’s School of Earth and Space Exploration.

marketing and communications director , School of Earth and Space Exploration

The ASU Office of Human Resources announces the promotion of Erin Ellison from interim director to director of the Office of Equity and Inclusion.

The ASU Office of Human Resources announces the promotion of Erin Ellison from interim director to director of the Office of Equity and Inclusion. In her new role in the area of employment compliance, Ellison ensures an equitable and inclusive workplace environment for faculty, staff and students.

“This is a critical role at the university that demands deep legal knowledge, good communication and relationship-building skills, and excellent judgment,” said Kevin Salcido, ASU vice president for human resources/chief human resources officer. “Erin displays these attributes in abundance. We are very happy she has accepted the position.” 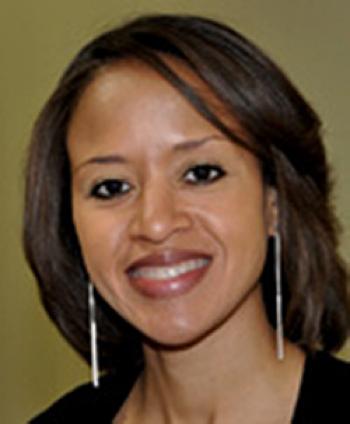 Ellison joined Arizona State University in September 2014 as a senior equal employment opportunity (EEO) consultant. In that role, she worked on complaint investigations, trainings, conflict resolutions and EEO-related law and policy application. She has extensive experience in investigations, affirmative action, mediation and educational equity. Her previous employers include the Metropolitan Council (Minnesota), the City of St. Paul Department of Human Rights and the U.S. Equal Employment Opportunity Commission.

“I am committed to the continued success of this office and will remain diligent to ensure quality services, fairness, access to opportunities and inclusiveness,” Ellison said. “I will use all resources available, including proactive measures, to attain these goals.”

Ellison, who begins her new position on Aug. 31, has a Bachelor of Arts degree from the University of Minnesota-Twin Cities and a law degree from William Mitchell College of Law. As a judge advocate in the U.S. Army JAG Corps, Reserve Component, she is knowledgeable about the military’s equal opportunity policies and Sexual Harassment and Assault Response and Prevention (SHARP) programs.